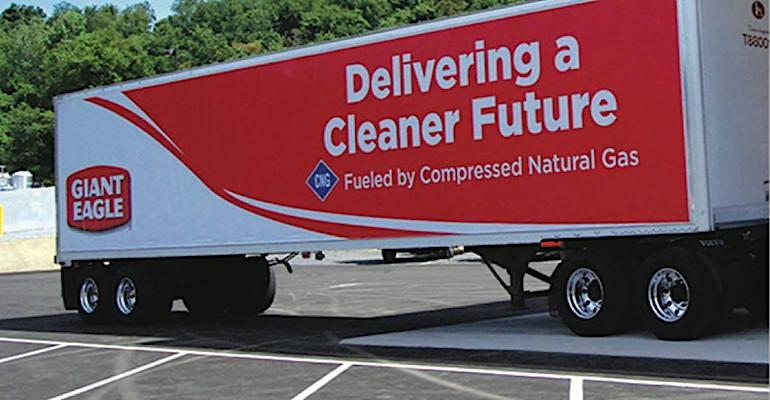 Giant Eagle
Giant Eagle's emission reduction efforts to date include the conversion of about 70% of its truck fleet to alternative energy.
Issues & Trends>Sustainability

Plan includes $100 million investment over the next decade

In announcing the plan late yesterday, Pittsburgh-based Giant Eagle said it has set an initial target of 50% carbon dioxide reduction by 2030. The company noted that its net-zero carbon emissions objective includes the electricity, refrigerant and fuel used to operates its stores, retail support centers and corporate offices as well as the energy to move goods and people with its truck fleet.

Citing U.S. Environmental Protection Agency estimates, Giant Eagle reported that the average supermarket annually emits the equivalent of 6.4 million pounds of carbon dioxide through refrigerants and electricity consumption, equal to emissions from 635,000 passenger vehicles in a year. As a result, net-zero emissions would translate to a significant carbon reduction by Giant Eagle, which operates 474 grocery and convenience stores, including more than 200 supermarkets, across western Pennsylvania, north central Ohio, northern West Virginia, Maryland and Indiana.

“Our future generations deserve a healthy planet and reducing our impact on the climate is a critical way we can make good on this obligation,” Giant Eagle President and CEO Laura Shapira Karet said in a statement.

Related: 7-Eleven rolling out 500 electric vehicle ports by end of 2022

To reach net-zero status, Giant Eagle plans to build on its efforts to date with an investment of $100 million over the next 10 years. Key objectives include 100% conversion of the retailer’s fleet of more than 200 trucks to alternative energy, and infrastructure improvements that target carbon reduction and energy efficiency, such as smart lighting and greener HVAC systems.

The retailer said it also will earmark funds for green energy solutions — such as direct green power purchasing agreements and other renewable power — and invest in negative emissions technologies, including carbon capture, soil sequestration and reforestation.

In the past eight years, Giant Eagle has cut carbon dioxide emitted from its operations by 22%. The company said it achieved the reduction via the conversion of about 70% of its truck fleet to alternative energy, LED retrofitting and more efficient heating and cooling, among other measures.

“Giant Eagle has proudly served our communities for nearly a century,” Karet added, “and we are committed to doing our part to preserve the neighborhoods we call home for another 100 years.”