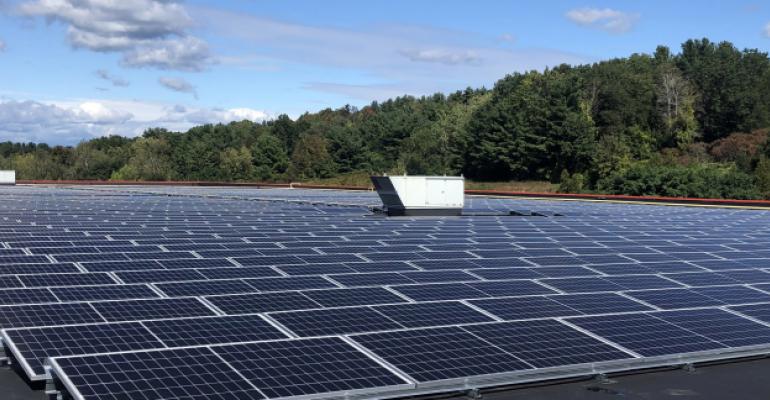 With Its 500,000-square-foot distribution center in its headquarters of Pembroke, N.H., now home to the largest rooftop solar installation in the state, regional grocery wholesaler and distributor Associated Grocers of New England (AGNE) is ramping up its commitment to improving the sustainability of its business.

The 1MW SolarEdge DC-optimized array is forecast to offset approximately 20% of the building’s annual energy consumption, contributing to a ROI of less than nine years, and will reduce carbon emissions by approximately 1,100 tons per year.

AGNE, the largest retailer-owned wholesale grocery distribution center in New England, serves over 650 independent retail stores across the region, as well as upstate New York. The decision to implement a solar strategy is part of a wider cultural shift taking place across the AGNE business, the company said.

Prior to his retirement, former board member Tom Bradbury initiated a companywide sustainability strategy to help guide the company to a greener future. The Associated Grocers Green Awareness Committee (AGGA) was formed to look at ways to reduce the company’s impact on the environment, while also helping to increase its profitability.

After completing a number of smaller projects, AGGA identified an opportunity to achieve a large-scale energy reduction by installing a solar array on the roof of its distribution center. The facility is the hub of AGNE’s operations and operates 24 hours a day, seven days a week. In addition to the usual processes involved in the day-to-day running of a commercial building, the site requires a large amount of energy to power its extensive bank of refrigerators and freezers, contributing to its high energy consumption.

“Our mission statement focuses on serving the community and our efforts to combat climate change is a big part of that,” noted Tommy Coyle, marketing media specialist, AGNE. “We hope that the success of this project will encourage other businesses to adopt solar to power their operations. Hopefully we can blaze a trail in that regard."

According to AGNE and ReVision Energy, which installed the solar rooftop, the large roof surface on the distribution center meant it would have been possible to install a much larger PV system, up to 2.5MW, which would have enabled AGNE to offset even more of its energy consumption. However, this was not possible due to New Hampshire’s 1MW net metering cap on solar installations. As a result, finding a way to extract maximum energy from the permitted array was critical.

“We use SolarEdge mostly for rooftop systems due to its reliability and the fact its Power Optimizer technology enables us to maximize energy generation,” said Bobby O’Brien, project manager, ReVison Energy. “The AGNE facility has an open roof surface with no tree shade, but there are some mechanical units on the roof that will cast a shadow over parts of the array at certain times of the day. With a traditional string inverter system, even if just one or two modules are shaded, the performance of the entire string is drastically reduced. SolarEdge’s Power Optimizer solution mitigates this problem, which enables us to squeeze extra energy production from every project we install.”

“Another advantage of the DC-optimized system is its module-level monitoring capability,” added O’Brien. “There are 3,400 modules on the roof of the AGNE building. The SolarEdge monitoring platform and automated alert system enables us to identify and respond to any technical or performance issues very quickly. That ensures our truck rolls to site are fewer, more efficient, and that hopefully we can solve issues on a ‘know-before-you-go’ basis.”