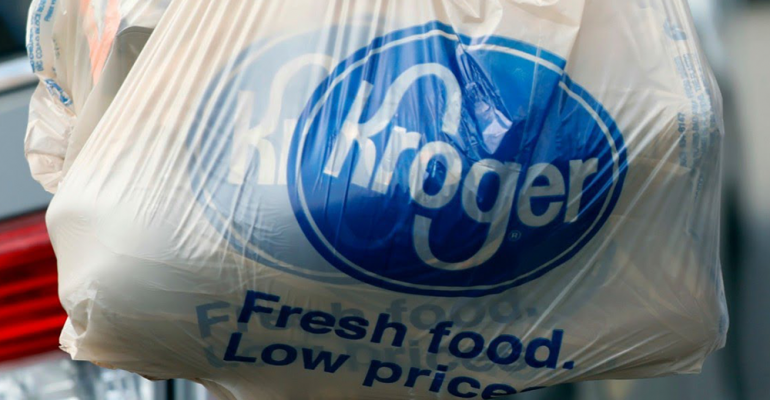 Kroger to eliminate plastic bags by 2025

Joining a number of businesses that are making efforts to curtail or eliminate single-use plastics, The Kroger Co. announced today that it plans to eliminate plastic shopping bags from its more than 2,800 company-owned supermarkets by 2025. The supermarket giant distributes 6 billion single-use bags per year.

The company said it would remove the bags first from its QFC chain in the Pacific Northwest and then roll out the program to its other stores. Kroger said it would first offer paper bags instead of plastic and sell reusable bags for roughly $1 to $2, depending on the market, with a goal of getting all customers to adopt reusable bags over the next seven years.

“We listen very closely to our customers and our communities, and we agree with their growing concerns,” said Mike Donnelly, Kroger’s executive vice president and COO, in a company statement. “That’s why, starting today at QFC, we will begin the transition to more sustainable options.”

In an opinion piece published today in the Cincinnati Enquirer, Kroger Chairman and CEO Rodney McMullen wrote, “The plastic shopping bag’s days are numbered. Major cities around the country, from Los Angeles to Chicago to Boston, have banned their use in retail settings. Our customers have told us it makes no sense to have so much plastic only to be used once before being discarded. And they’re exactly right.”

He continued, “As America’s largest grocer, we recognize we have a responsibility to cut down on unnecessary plastic waste that contributes to litter, harms the environment, and, in some cases, can endanger wildlife.”

The move is part of a broader shift by companies to reduce waste, especially plastic. Large companies such as Disney, Starbucks, Marriott and McDonald’s are getting rid of plastic straws, while Dunkin’ Donuts is phasing out polystyrene foam cups by 2020.