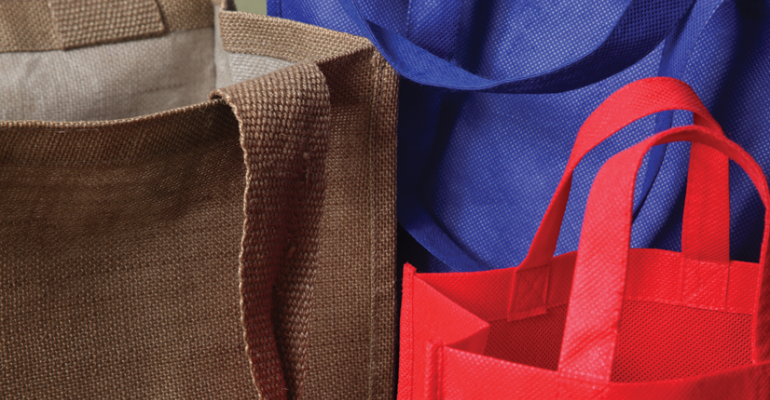 REUSABLE BAGS AND BOTTLES have become popular expressions of green spirit. Supermarkets both give away and sell them, and customers have eagerly adopted them as sustainable options to plastic.

The problem is they can turn green themselves. Bags, as well as reusable water bottles, can harbor Salmonella and coliform bacteria, including E. coli, if they’re not cleaned on a regular basis, according to a recent study by the University of Arizona and Loma Linda University. Such illnesses defeat the purpose of having these accessories in the first place.

“Interestingly, retailers do very little to educate consumers about the possible cross-contamination dangers associated with using reusable bags and bottles,” said Justin Hiller, vice president of Hiller’s Markets, the seven-store chain based in Detroit. “There certainly is some value in pushing proper handling and maintenance of reusable bags.”

Indeed, supermarkets should seek to keep shoppers safe through educational outreach. Not only does information help prevent illnesses, it can benefit the retailers too, said Jim Wisner, president of Wisner Marketing Group, Libertyville, Ill.

“From the standpoint of the retailer, reusable bags have appeal because they save the chain money that would otherwise be spent on disposable bags and they demonstrate corporate environmental consciousness,” said Wisner. “But retailers are often blamed for food-related illnesses that may be the fault of the consumer’s poor handling or cooking techniques. By educating shoppers on how to keep reusable bags and bottles clean, chains might avoid unnecessary recalls and bad publicity.”

To help combat potential problems, Hiller’s Markets uses Tyvek reusable bags made from a high-density synthetic material that is easier to clean than standard woven bags. The bags are also treated so that they can be easily wiped down or machine-washed, and each one comes with cleaning instructions attached.

The chain does not currently have signage or literature teaching shoppers how to care for their reusable containers. This, said Hiller, is something Hiller’s Markets will be looking into in the near future.

According to the UA/Loma Linda study, “Assessment of the Potential for Cross Contamination of Food Products by Reusable Shopping Bags,” machine washing is the most effective method of ensuring that bags are safe. Hand washing also works.

Despite such an easy remedy, 97% of the shoppers surveyed by researchers stated they do not wash their bags routinely. Most don’t even take simple measures that could prevent common problems in the first place, said Charles Gerba, UA professor of soil, water and environmental science and co-author of the report.

“Over half of the bags had some form of coliform bacteria and 12% contained E. coli,” said Gerba. “Some people don’t separate raw meat from produce when packing their own groceries at the supermarket.”

Consumers also often use their food totes to carry things like dirty laundry and athletic shoes and they tend to store the bags in the trunk of their cars where warm temperatures and leftover organic matter in the bags allow bacteria to thrive.

Gerba and his team of researchers were surprised to learn that the subjects did not designate the same bags for meat or produce each week. Most of those polled assumed that separating food items during individual visits was enough to prevent cross-contamination.

“People don’t think that the juice from their steak container last week could cross-contaminate their produce the following week. They don’t usually consider sports bottles as a source of contamination either,” said Gerba. “But these should be washed regularly, with special care to clean any flip or push-down lids since many people do not wash their hands before opening or closing the bottles.”

How Retailers Can Help

Retailers can take several steps to prevent their customers from becoming sick from bags or bottles they purchase at their stores. They can make sure reusable totes and bottles have hygiene instructions printed directly on them. Select bags could be printed with the words “meat” or “produce” to help people keep track of which products go where.

“The best place to put messages about how to avoid foodborne illness is on the bag or bottle, but supermarkets could also print out a short list of do’s and don’ts to have cashiers slip into shoppers’ bags as they check out,” Wisner said. “A brief, simple educational campaign complete with printed totes, maintenance checklist and at-the-checkout signage would do the trick.”

In support of such a campaign, supermarkets should have reusable bags and bottles displayed near the checkout. A meat manager or other store employee could also hold in-store reusable container maintenance demonstrations to further educate shoppers, he added.

“I certainly think exposing customers to any news that could be perceived as harmful or dangerous to their well-being could cause them to change their shopping patterns or habits,” said Eric Anderson, executive vice president and chief marketing officer at Findlay, Ohio-based Fresh Encounter. “Rather than trying to educate consumers on the benefits or dangers associated with the use of reusable totes post purchase, tagging totes with proper care instructions addresses many of those issues at the time of purchase.”

“Our baggers have been trained to bag meats, cleaning products, produce and other products separately to avoid cross-contamination, so we are doing our part to keep our customers safe,” he said, adding that retailers can only do so much.

“We can’t tell which bags were used for what products the last time they were here,” he said. “That is up to the shopper to keep track of and they have to keep up with regular sanitizing schedules too.”

Consumers throughout the country have readily adopted reusable bags and bottles over disposable plastics. But in some states, usage of fabric totes and multi-use metal drinkware may no longer be voluntary, thanks to new laws forbidding select single-use containers.

“We’re at a point where more communities are banning single-use plastic bags and bottles altogether,” said Jim Wisner, president of Wisner Marketing Group, Libertyville, Ill. “So it’s time for retailers to take a leadership role when it comes to distributing these items and helping people make the transition by educating them on the benefits, safety and environmental benefits.”

On Jan. 1, the city of Concord, Mass., began honoring a new law that bans single-serve bottles of water. The law was prompted by one environmentally conscious local woman and eventually adopted by officials as a citywide ordinance.

Also in January, three of the four major Hawaiian islands — Hawaii, Maui and Kauai — adopted a regulation that outlaws single-use plastic bags. Retailers have one year to discontinue their use of plastic bags, after which time customers will need to request a bag, for a small fee.

“Consumers should be able to figure these things out on their own, but it doesn’t hurt to help them along with a few pointers every now and then,” said Tim Cummiskey, grocery manager of Highland Park Market, Glastonbury, Conn.