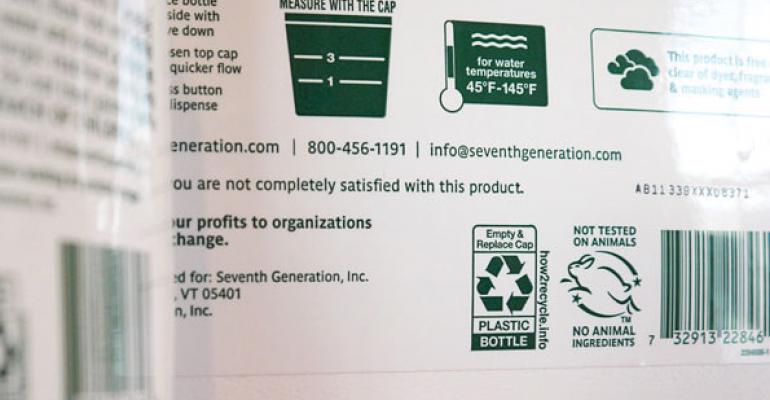 It’s not a secret code for the initiated. The labels are an ambitious test of the voluntary Packaging Recovery Label System being piloted by a handful of companies this year, with the goal of eventually becoming an industry standard. The initiative was developed by the Sustainable Packaging Coalition, a division of the sustainability nonprofit GreenBlue, based in Charlottesville, Va.

The SPC, whose roughly 200 members include Costco and Target and such CPG firms as Seventh Generation, Campbell Soup, Kraft Foods, Procter & Gamble, General Mills and Unilever, “identified a need to have a more consistent, harmonized and transparent way to communicate recyclability to consumers,” said  Anne Bedarf, senior manager for SPC.

The project, she added, intends to increase recyclability but “the focus is initially on better communication so consumers are not so confused.”

Products with multiple packaging types would get a label for each type. SPC also created a fourth label — initially intended for film and overwraps — indicating that a package can be deposited in a store’s plastic-bag recycling bin if clean and dry.

Each recycling label contains the well-known chasing arrow triangle know as the Mobius loop logo, and names a packaging material, such as paper, and a packaging component, like a box. A diagonal cross across the logo is employed for the not-yet-recycled label, while the verbiage “check locally” and “not recycled in all communities” is used in the limited recycling label. This system follows the Federal Trade Commission’s “Green Guides” designed to prevent greenwashing, and is based on the On-Pack Recycling Label system adopted in the U.K.; it uses national recyclability data compiled by SPC.

All labels make note of the website, www.how2recycle.info, where consumers can find additional resources, including ways to track down local recycling services.

Besides Costco and Seventh Generation, the recycling labels are being piloted this year by ConAgra Foods, REI and Microsoft, and the test phase is still open to other retailers and CPG companies.

In addition, Sealed Air, a manufacturer of packaging components for shipping containers, will be the first to test the store drop-off label. SPC would like to see store drop-off pilots for grocery products such as paper towel and toilet-paper wraps, as well as clean and dry bread and cereal bags, said Bedarf.

As the label gains wider currency, the SPC hopes it will “shame false claims out of existence,” said Bedarf, such as requests to “please recycle something that is not accepted in the majority of communities.” Greater labeling accuracy should also help keep recycling streams uncontaminated, she noted.

There is also the hope that some consumers, observing that their community doesn’t take a “widely recycled” product, will complain to the local recovery facility and ask, “Why not you?” said Gail Tavill, vice president of sustainable development for ConAgra Foods, which helped develop the new labeling system.

“As long as we don’t find out people are more confused than ever, we’ll roll out more broadly as time goes by,” she said.

But the label alone would not be enough to justify a package redesign at ConAgra, said Tavill. The popcorn products were chosen because their packaging was already being redesigned and could accommodate the new label.

Consumers have expressed concerns that the recycling labels will replace the resin identification number codes embossed on the bottom of plastics, which are required in 39 states. But the new label will be used along with — not in lieu of — the codes, Bedarf said. The codes are actually designed to be a guide for recyclers, not consumers, who may mistakenly apply them to recycling, she noted.

The label test is exciting for sustainability advocates who have been frustrated that recycling rates in the U.S. remain low compared to other parts of the world. SPC’s label “is meeting a clear need given consumer confusion over the existing recycling logo,” said Anastasia O’Rourke, co-founder of Ecolabel Index, a global directory of ecolabels. “We also like the integration of web-based information for those who want to dig deeper.”

While most supermarkets recycle plastic bags and many take beverage bottles and cans, not many stores recycle empty yogurt cups, hummus tubs and other containers made of polypropylene (No. 5) plastic.

The main exception is Whole Foods Market, Austin, Texas, which now accepts those items at 232 of its 317 stores as part of the “Gimme 5” program run in conjunction with Preserve Products and underwritten by Stoneyfield Farm, Brita, Tom’s of Maine and Seventh Generation.

“Most communities don’t accept these common containers for recycling,” says Preserve Products on its website. “There’s not enough money in it for them to make it work.”

Whole Foods delivers the used containers to Preserve, which converts them into toothbrushes and razors.

Consumers who don’t live near a Gimme 5-participating store can mail their No. 5 plastics to Preserve.