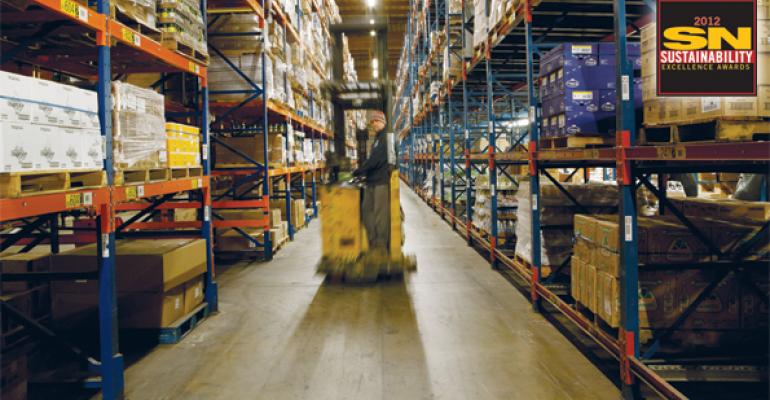 About three years ago, Al Plamann, chief executive officer of Unified Grocers, was in the cafeteria at the member-owned wholesale cooperative’s Los Angeles headquarters when he noticed two women bringing their own plastic dishes up to be served.

“They asked the lady who runs the cafeteria to put the special of the day on their plastic plates,” he said. I asked them about it and they said, ‘We just think it’s better to do that.’”

Plamann (left) has since adopted the mindset manifested by those employees in bringing a range of sustainability innovations to the wholesaler. “It started as a mindset among employees, at a lot of different levels, who felt this was an important thing to do,” he said. “It wasn’t a top-down, ‘This is what we should do’ decision. It was a question of recognizing that the mindset, the culture, dictated that we commit to this.”

Unified, which did $3.8 billion in sales last year, began to look at sustainability in two ways. One is internally focused on the company and capitalizes on what employees want. For example, Unified has developed an internal website called “Green 365,” which allows employees to make comments and offer ideas, tips and activities.

Unified also looks externally on ways it can influence its vendors and retailers. Unified’s procurement staff, for example, encourages vendors to support sustainable agriculture programs and selects “preferential suppliers” for sustainable seafood and other products.

For this comprehensive approach to sustainability, Unified Grocers was selected as winner of SN’s 2012 Sustainability Excellence Award in the wholesaler category.

Unified’s emphasis on sustainability has certainly been influenced by its presence in California, perhaps the most environmentally progressive state in the nation. For example, several years ago the state government encouraged fleet owners to install particulate traps on tractors, and Unified acted. “It wasn’t especially efficient because you lost a little mileage,” Plamann said, “but it was the right thing to keep particulates out of the air.” That practice has since become a regulation. 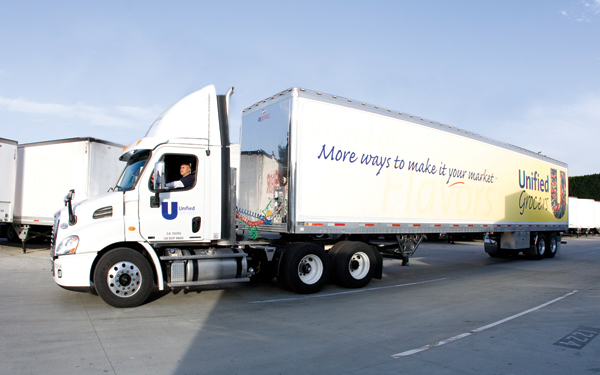 Unified’s desire to upgrade its fleet has led it to purchase, at a cost of $7 million, 63 clean-diesel tractors, which will be delivered by year’s end. “In the next three or four years, all tractors are going to have to come up to this standard, so why not get on board now?” he said. In contrast to the particulate trap, “the newer [emissions-reducing] technology does not rob you of miles per gallon, so we’re not giving up anything.” Unified is also adding new on-board computers to its fleet and is exploring temperature-sensing devices for trailers that can keep a constant temperature in refrigerated units and reduce fuel usage.

California — especially in the Los Angeles area — poses special transportation challenges to food distributors because of its dense traffic patterns. Whereas most routing systems look for the shortest distance between two points, in Southern California the critical issue is “how long a tractor-trailer sits on the freeway,” said Plamann. By subscribing to the California highway patrol and local LA systems, Unified constantly monitors traffic patterns at different times of the day, adjusting for seasonal changes, and making routing changes on the fly.

These traffic constraints put a premium on communicating with drivers, and Unified’s “end target” is to have “constant communication” with them, which current onboard technology may not yet deliver, Plamann said.

In its warehouses, Unified has addressed the environmental friendliness and efficiency of its material handling equipment. For example, it has been giving preferential treatment to vendors whose equipment is manufactured with recycled materials — such as a forklift with batteries that use recycled lead.

A number of the forklifts in Unified’s Stockton, Calif., facility are powered by liquid-methanol fuel cells that have extended the battery lives of the units by about 20%, allowing the forklifts to run longer without work stoppage. However, the fuel cells are still in the developmental phase and Unified is helping to improve them in concert with a supplier he declined to name. “The units are not as reliable as we initially thought, but the concept is still something we’re supporting,” Plamann said. “Over the next one to two years we will have made significant improvements in them — we expect to double battery life — and they will probably be the future of fuel cells.”

Unified leverages a program offered in Los Angeles to slow down or shut off electrical usage when the grid reaches a certain peak level where premium rates would otherwise kick in. At its LA warehouse, the company shifts receiving and shipping so that they don’t coincide with peak-hour slow-downs. “We try to schedule receiving and shipping in chilled and freezer facilities so the doors are not open when the power is shut down,” Plamann explained. “I haven’t had negative comments from anyone about this.”

Unified has also been installing “the most effective lighting” in its warehouses as well as motion sensors. “We’ve migrated first to mercury-vapor lamps and then to LED lighting,” Plamann said.

Unified’s IT department has developed a number of web-based systems geared to reducing the amount of paper used by the company and its retailer members. “We’ve worked really hard to encourage employees to do as much electronic communication as possible,” Plamann said. “And we’ve dramatically reduced the amount of paper transactions with [retail] members.”

Water is another target of conservation. Unified is using a computer system to reduce the amount of water used in its dairy plant, and employing an outside service to wash its trailers with a “semi-recyclable” system that “uses quite a bit less water than the standard truck washers we have.”

Unified also tries to encourage its retail members to pursue sustainability initiatives. Two years ago, for instance, the company made a DVD that offered ideas on how retailers could encourage consumers to recycle. Retailers are also recruited to “work with us when we talk to vendors about reducing packaging,” Plamann said.

In the past three months, Unified has added more than 10,000 SKUs of natural and organic products and is rolling out the program in the Pacific Northwest, with plans to bring it to California. The wholesaler has created a pilot database for the program that retailers can use to perform searches for products that are Fair Trade certified, non-GMO (a particularly sensitive issue in California) or allergen-free, among other criteria. Unified has also been able to step up its supply of local products, primarily in the Pacific Northwest.

Ultimately, Plamann’s take on sustainability is that it’s an inevitable priority for any company today. Lagging companies “will be unable to ignore the concept of sustainability for very much longer,” he said last year at the Sustainability Summit, hosted by the Food Marketing Institute and the Grocery Manufacturers Association.

“Those companies will soon find themselves competing at a disadvantage in the marketplace, find themselves battling to preserve their credibility among stakeholders and find themselves fighting to keep loyal customers they have had for years,” he said.