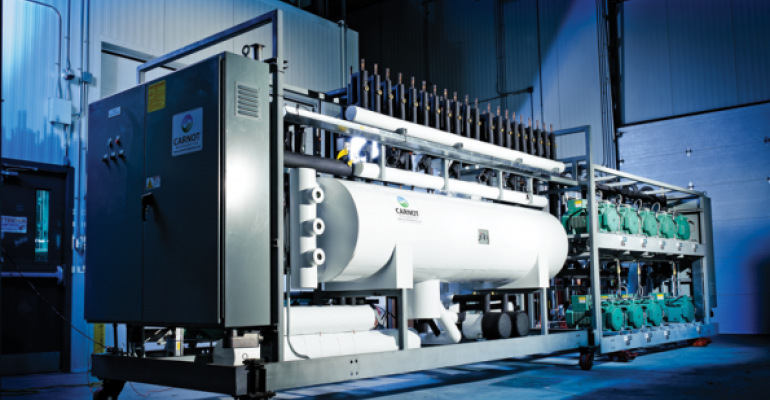 <p> Hannaford will pilot a transcritical refrigeration system in a new store.</p>

WASHINGTON — Retailers looking at or adopting transcritical refrigeration systems, which use only carbon dioxide (CO2) as a refrigerant, are confident that technicians and contractors will be able to handle the installation and maintenance of the new systems, though they may charge a premium.

“With a little training on the uniqueness of certain aspects of the system and understanding the higher pressures, the vast majority of technicians have no trouble with it,” said Steve Hagen, procurement manager, Sprouts Farmers Market, Phoenix, who participated in a panel discussion on natural refrigerants such as CO2 and ammonia last month at the ATMOsphere America 2013 conference here. Sprouts has installed a cascade refrigeration system that largely employs CO2 refrigerant, and “continues to look at opportunities to use natural refrigerants,” he said.

Rod Peterson, national procurement manager, refrigeration & HVAC, Sobeys, Stellarton, Nova Scotia, acknowledged that the Canadian grocer was concerned about whether contractors would be able to install its initial transcritical system in Western Canada “in a cost effective manner.” However, the contractor turned out to be “up to speed,” he said. “They were excited and proud to be working on the first system.”

Sobeys, by far the leading user of transcritical refrigeration among North American food retailers, has 45 stores running the system, mostly in Quebec, with 20 more to follow suit this year, including the first in Ontario. The transcritical systems cost about 11% more than conventional systems but use less electricity and have lower installation costs, Peterson said, adding that with heat reclaim the payback is three years.

The contractor working with Whole Foods Market, Austin, Texas, on the installation of a transcritical system in a new Brooklyn, N.Y. store “priced for the unknown because they were nervous” about the new technology, said Michael Guldenstern, director, Energy Efficiency Services, Hopkinton, N.H., who has worked with Whole Foods Market on its natural refrigerant projects. “It was a little more painful than we anticipated.”

In addition to the store in Brooklyn under construction, Whole Foods is designing a transcritical system for a store on the West Coast, noted J’aime Mitchell, green mission specialist for Whole Foods’ Northeast Region. “We’re excited about natural refrigerants but there’s still some caution because we haven’t seen real-world maintenance or energy numbers yet,” she said.

Harrison Horning, director of equipment purchasing, maintenance and energy – North, Delhaize America Shared Services Group, Scarborough, Maine, observed that for Hannaford Supermarkets’s first transcritical store the company discovered a “lack of a spare parts network” in the U.S. “We grabbed our passport and drove to Canada to get parts.” Hannaford, a division of Delhaize America, opened what is considered the first U.S. store with a transcritical system last month in Turner, Maine.

Richard Heath, director of energy optimization, Source Refrigeration & HVAC, Anaheim, Calif., said that it’s important for companies working on new refrigeration systems — manufacturers, contractors and consultants — to write a “scope of work” to limit the costs of the project. Otherwise, “they’re going to pad these things of they don’t know what to expect,” he said.

Heath was formerly a refrigeration executive for Supervalu who helped deploy a refrigeration system last year at an Albertsons store in Carpinteria, Calif., that uses carbon dioxide, ammonia, and propane. The system used $60 per day less electricity than a system using R-407a refrigerant in a study that looked at the ammonia system over 150 days and the R-407A system over 108 days, he said.

The impetus for the Carpinteria system came from Supervalu’s commitment to the Consumer Goods Forum to begin using natural refrigerants by 2015. (Supervalu sold its Albertsons stores in March to AB Acquisition, parent of Albertsons LLC.) He called the Carpinteria store’s refrigeration system  “90% natural” and noted that “it’s not all or nothing” when it comes to natural refrigerants.

Hagen cautioned that until overall costs of the transcritical system are shown to be on par with existing technology, “you’re going to see limited acceptance by the leaders of the industry.” Still, he expects to see transcritical systems deployed in colder climates (where they operate more efficiently) and ammonia systems in warmer climates.

Some information for this story was supplied by Jana Topley Lira, media officer for Shecco, Brussels, which hosted ATMOSphere America 2013.