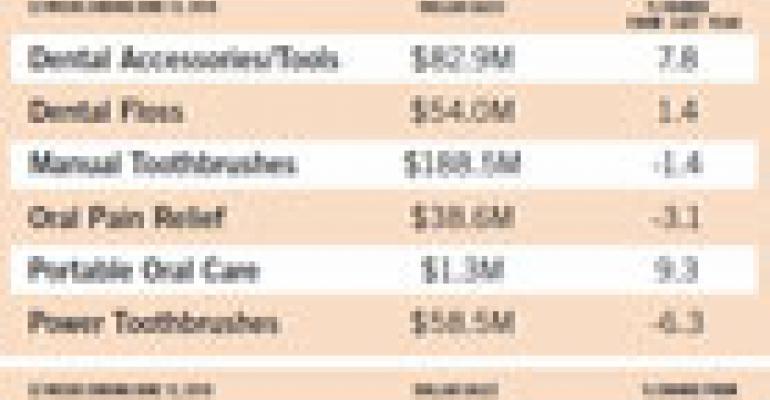 Sales of toothbrushes/dental accessories in supermarkets have stabilized at about $424 million over the past two years after a drop-off in 2007 and 2008; unit sales have even risen nearly 2% over the 12 months ending in mid-June. The biggest gainers have been dental accessories/tools (about one-fifth of the market), which grew nearly 8% in dollar sales, and portable oral care (just 0.3% of the market), which increased more than 9% in sales. Manual toothbrushes, which account for 45% of the total, were down slightly in dollar sales (1.4%), up slightly in unit sales (1.6%). Probably impacted by the recession, power toothbrushes were down more than 6% in sales and units.

The toothbrushes/dental accessories category has grown consistently in the drug sector since 2007, reaching $591.3 million for the 12-month period ending in mid-June, a gain of 2.4%. In all three sectors (food, drug and mass), this category gained just over 2% in sales for a total of $1.4 billion in the past year, down from $1.36 billion in 2007. Private label is playing a big role in this category, along with a decline in mid-range products and the growth of dentist-quality products, said Research and Markets, Dublin, Ireland.