Bozzuto’s: Technology Is Path to Consumers

DALLAS — When it comes to personalizing retail approaches using technology, “it’s not how much you know but what you share with customers that defines how effective you will be,” a Bozzuto’s executive told attendees at an FMI2012 session here.

Steve Methvin, vice president, retail technology and e-commerce for the Cheshire, Conn.-based wholesaler, said retailers need to regard technology as an enabler, “to help them know their customers better.”

During a workshop session on personalizing the shopping experience, he offered comments on three aspects of technology — mobile marketing, content and social media:

• Mobile marketing “must be simple to use and feature fresh content often,” he pointed out, noting that nearly 14% of customers at some supermarkets already use mobile on a regular basis. 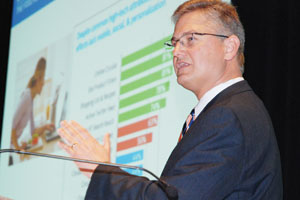 “You can also send text messages to customers in which you invite them to enter a code at a touchpoint in the store and get a coupon, plus recipes and other useful information,” he said.

• Content itself. “Food is an easy subject to generate exciting content, but don’t let technology get in the way of the food,” Methvin (right) cautioned.

“If you’re using an interactive touchpoint at store level, don’t install a kiosk right where people walk in because they want to see food. And don’t put it in the produce or floral sections because those products are so exciting to see that technology only gets in the way.

“The best place in the store for an interactive kiosk is in the meat department, where the product is less attractive.”

Bozzuto’s has found in-store touchpoints for recipes and coupons can boost sales per basket by 17% by suggesting items a shopper might not otherwise have considered, Methvin said.

• Social networks are effective, Methvin said, “because people like to talk about food.”