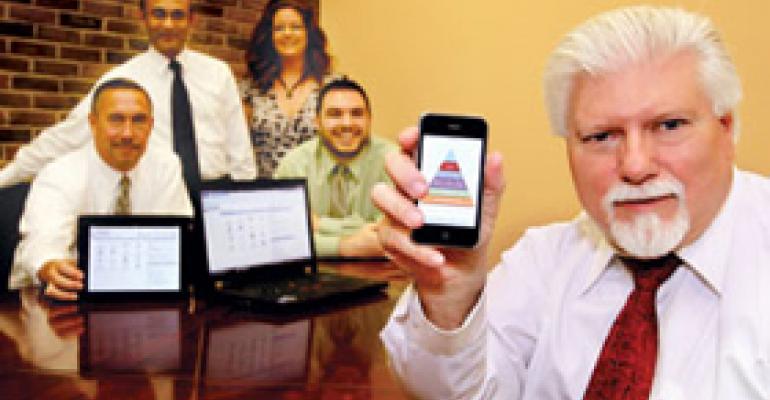 One of the most productive uses of the Internet in food retailing is the portal a secure gateway, or extranet, through which suppliers, brokers, carriers and retailers can share all manner of data. Wal-Mart Stores was the first retailer to recognize the power of giving its suppliers a view into real-time store sales data via its famed Retail Link portal. Since then, numerous retailers and wholesalers

One of the most productive uses of the Internet in food retailing is the portal — a secure gateway, or extranet, through which suppliers, brokers, carriers and retailers can share all manner of data.

Wal-Mart Stores was the first retailer to recognize the power of giving its suppliers a view into real-time store sales data via its famed Retail Link portal. Since then, numerous retailers and wholesalers have followed suit with portals of varying kinds. Supervalu's SVHarbor portal covers everything from promotion management to dock scheduling; Safeway employs a portal for the transmission and management of trade promotions; Unified Grocers has a retailer extranet and a vendor portal used for new items among other functions; Wakefern launched a new-item portal last year.

Drawing from existing efforts and adding some of its own innovations, Bozzuto's, a wholesaler based in Cheshire, Conn., that supplies about 1,000 retail customers in the Northeast, has rolled out a multi-faceted portal over the past four years called SCORE (Supply Chain Optimization & Retailer Efficiency).

SCORE encompasses about a dozen modules, including four key internally developed systems: Merlin (for retailers), VICI (for retailers and vendors), IESS (for transportation carriers) and Westwood (for vendors and brokers). Bozzuto's introduced Merlin in 2007, followed by VICI, while Westwood and IESS were launched over the past 10 months.

There are no fees for Merlin, IESS or Westwood, though “premium services” with fees are coming in the near future. VICI requires a service fee that was not disclosed.

Overall, SCORE represents a single source of real-time business data for all of its users, including Bozzuto's employees — everyone “from the CEO to the yard jockey,” said John Keeley, the wholesaler's vice president of business information technologies. “Everyone's looking at the same sheet of music, and we're all communicating a lot better, which enhances efficiencies.”

“It's a one-stop shop,” said Rick Clark, Bozzuto's vice president of logistics and transportation. “You can find out whatever information you need to know by going to one platform.”

“This is the ‘Google’ of Bozzuto's,” said Gail Handley, Bozzuto's vice president of customer service. “You ask a question, and it comes up with an answer.” Information not currently available in SCORE can be readily added, noted Steve Traun, the wholesaler's sales director.

Facilitating that communication at its four warehouses, flat panel screens provide a snapshot of activity, including selection, loading and invoicing, and whether orders will be delivered on time. Keeley likened this to an “arrivals and departures” screen at an airport. Other users can access information via workstations, laptops, mobile devices such as iPhones, and other display devices.

Bozzuto's executives began laying the groundwork for SCORE about five years ago. Michael Bozzuto, the wholesaler's chairman, president and chief executive officer, “knew that for us to grow, we needed to use technology to help the business to change.” said Keeley. Over time, “it became evident that we needed to go down the portal route.”

Indeed, the development of SCORE helped Bozzuto's “to be more efficient, to grow, and to take on major chains like Big Y,” said Keeley. Bozzuto's become the wholesaler for Big Y Foods, Springfield, Mass., a chain of 57 stores, in 2008. “We needed [the portal] to absorb that business growth,” he said.

In creating the portal, Keeley and his team examined what information its retail customers “are looking for,” as well as how “we can better communicate their needs to our operations group, procurement group and sales team,” he said.

Through the Merlin module, retailers “can get all of the information they need from us,” said Keeley. For example, retailers can log on to find out where their delivery truck is in real time, tapping into a GPS tracking system. Bozzuto's customer service department — which receives calls from retailers inquiring about the status of deliveries — has access to the same information. The system tracks whether deliveries are on time and provides that data to Bozzuto's, helping the wholesaler to improve its on-time rate.

The Merlin system is also adaptable. For example, if retailers don't want their store managers to see certain data — such as accounts receivable — the system is readily configured to block them from that information.

VICI is a shelf management tool used to create planograms and distribute them to retailers, who, in turn, can use it to provide feedback to Bozzuto's on new items and manage returns and credits. “Retailers give us input on what met their needs, what didn't,” said Keeley.

Currently, 497 retail customers are active in Merlin and VICI, about half of all registered in the system, including about 75 to 80 that use VICI, said Keeley. This includes such retailers as Big Y, Geissler's, Roche Bros. and Caraluzzi's. Not all of Bozzuto's retailers are ready to use the system yet. “Some are content to do the same job the way they have always done it,” said Traun.

IESS (inbound electronic scheduling system) is a module enabling carriers to schedule delivery appointments to Bozzuto's warehouses, saving the wholesaler $250,000 in scheduling fees annually. With IESS, Bozzuto's scheduling has gone from operating during business hours to around the clock. About 1,265 carriers are using IESS, 65% of those registered, said Keeley.

IESS allows Bozzuto's “to push back accountability to vendors and carriers and forces them to plan better,” said Doug Puza, the wholesaler's vice president of distribution services. The system also enables Bozzuto's to better control the flow of products into its warehouses. “We have information that tells us the best door to put an inbound load so that it's closest to where it will be slotted,” he said.

Westwood lets vendors or brokers introduce new items to the wholesaler's category managers, including data, images and deals; approved items are then made available to retailers via Merlin. “This improves speed-to-shelf,” said Keeley. Bozzuto's can also enter recall information into Westwood to put products on hold in the warehouse.

Recently, vendors were given the ability to provide allowances for existing items via Westwood, said Debra Bonney, project leader in the IT department at Bozzuto's. The module also permits some maintenance of existing items. (Bozzuto's has opted not to employ the Global Data Synchronization Network (GDSN) as a means for receiving item data from vendors.) More than 1,800 vendors are actively using Westwood and VICI, or about 84% of those registered.

All told, 72% of retailers, carriers, vendors and brokers registered in the system are showing activity in SCORE, said Keeley. That includes 5,411 users, generating 650,000 hits per month, according to Benjamin Nutting, manager of Web technologies for Bozzuto's. “That's pretty active for a business system,” Nutting said.

Caraluzzi's, a three-store independent based in Bethel, Conn., which was a sounding board for Bozzuto's during the development of SCORE, is one of the more aggressive users of the Merlin system.

“It gives us instant, live information on [Bozzuto's] out-of-stocks,” said Steve Caraluzzi, a co-owner of the retailer. “As soon as an order is placed for each department, we know whether or not we'll get our full load and whether substitute items are available.”

The system allows Caraluzzi's to observe the status of an order as it's being selected. “If Bounty six-pack is out of stock, you can click on an icon and it gives you the code for an eight-pack. It also tells you when the six-pack will be back in stock.”

Sales director Traun noted that if a retailer's request for a substitute item comes in late, “we might have to scramble at the warehouse to get that on the truck.” To ensure that they get the substitute item, retailers are asked to make the request before their order deadline.

Retailers using Merlin are given a continuous update of projections on when a truck is expected to arrive at a store. “Everything is documented with time stamps,” said logistics VP Clark. “It's tremendous visibility for them.”

“That visibility makes us a stronger distributor,” said VP of distribution services Puza. “Retailers see so much information that we have to perform better.”

Caraluzzi's, which receives deliveries from Bozzuto's between 2:30 a.m. and 4 a.m., uses the system to check on the whereabouts of a late delivery and “reallocate staff onto another project until the truck comes so time isn't wasted,” Caraluzzi said.

Caraluzzi's also employs Merlin to track credits due from Bozzuto's as well as accounts payable. The independent also looks at its wholesale purchases via the system on a quarterly or annual basis. And the system helps Caraluzzi respond more readily to customers who request an item the retailer may not currently carry. Caraluzzi and his cousin and co-owner Mark Caraluzzi use the iPhone application of Merlin to check one of their stores while in another.

One of the system's reports enables Caraluzzi to evaluate whether his buyers are making buys from Bozzuto's “at the right times within sales windows,” he said. Other reports show him Bozzuto's top 100 sellers and which of those Caraluzzi's is not buying, or the wholesaler's bottom 100 sellers, indicating items Caraluzzi's could discontinue.

Before Merlin, Caraluzzi's was at the mercy of voice mail. “You might have to make seven or eight calls a day because a guy starts early and goes home and you're playing phone tag forever,” said Caraluzzi. The Merlin system has had “a tremendous impact” on the efficiency of Caraluzzi's logistics, accounting and merchandising operations, he said.

For retailers not on the system, Bozzuto's customer service department uses Merlin to field inquiries. Those retailers also “want real-time information” about when their truck left the warehouse and where it is in transit, said VP of customer service Handley. “The information they need, they need it now. They don't want to wait.”

Bozzuto's distribution department also employs Merlin to track outbound shipments to stores, beginning with the time an order is received at the warehouse through selection, loading and invoicing. “We can see how the work is progressing,” said Puza.

The system has brought a “tremendous improvement” in service levels to stores, with on-time delivery rates to stores at about 94%, said Keeley. For their part, stores' on-time order rate — submitting orders by the deadline — is 90% to 92%, he added.

The next module planned for SCORE is an internally developed yard management system for tracking trailers and other assets in warehouse yards and directing drivers to take trailers to specific dock doors. Certain parts of the system are done now but the biggest gains will be seen by the end of 2010, said Bill Larsen, director, operations review for Bozzuto's.

But Keeley is also looking ahead to new applications, such as being able to send text messages to retailers and providing retailers with dashboards showing a host of key performance indicators. “It's a huge work in progress,” said Keeley. “There are many things we can launch through this. Having a Java platform has opened up all kinds of windows for us.”

IT breakdown of SCORE portal: