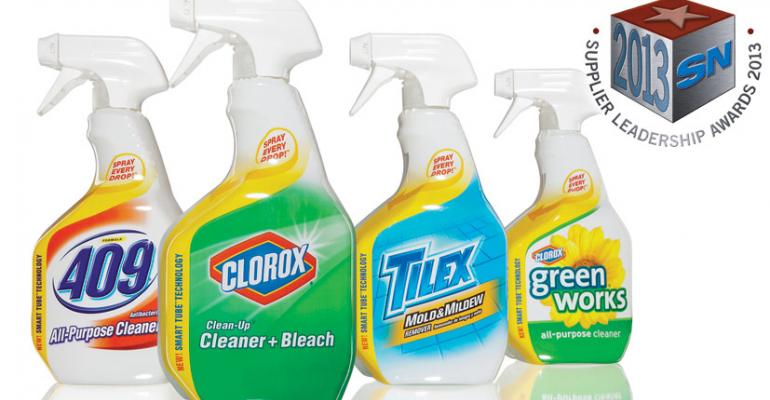 • Clorox developed technology that not only improves the trigger mechanism on spray bottles but also positions the “dip tube” on the outside edge of the container to enable consumers to utilize every ounce of liquid inside without struggling.

• The new packaging is giving consumers full value for their money by reducing liquid waste among Clorox products by an estimated 81,000 gallons annually.

"Good to the last drop” no longer applies only to a bowl of hot soup or a rich cup of coffee — it also applies to household spray cleansers produced by The Clorox Co., Oakland, Calif.

Clorox introduced a new package design earlier this year featuring a revamped trigger mechanism and a new dip-tube technology that enables users of spray products to utilize every last ounce of product — an accomplishment that earned the company SN’s supplier leadership award for packaging innovation.

No longer do users have to tilt a container one way or another to utilize every drop of cleanser or pour the unattainable remnants from one bottle into another, because the new technology includes a more durable bayonet-like trigger mechanism with a smoother pull that allows users to dispense the liquid with less effort, attached to a “smart tube” visible from the outside of the package that connects with the bottom of the container.

The combination makes it possible to use every last ounce of liquid, the company said.

The new packaging features a yellow strip down one side of the container that highlights the positioning of the dip tube.

The amount of liquid remaining in containers typically ranges from 1 ounce up to 4 or 5 ounces, according to Kerry Azelton, associate research fellow at Clorox’s research center in Pleasanton, Calif.

On a cumulative basis, however, Clorox estimates the new technology reduces the amount of waste by 81,000 gallons annually, “so consumers are definitely getting full value for what they spend,” Azelton told SN.

“The No. 1 complaint we’ve had from customers over the years is that users can’t get all the juice out of trigger bottles,” he explained. “That’s been a big aggravation and a big hassle for consumers for a long time.

“So we set to work trying to solve the problem at the same time we decided to improve the whole spray-bottle experience.

“Ultimately we came up with a better trigger that is more ergonomic, that fits the hand better and that is easier to use.

“However, as we refined the trigger, we couldn’t immediately solve the question of how to get the last drop of liquid out  of the container.

“But after years of experimentation we found a way to design the dip tube so it draws the juice to the trigger by putting it on the edge of the package and connecting it to the bottom of the container.”

In the past the dip tube inside the container was usually bent so it could suck up as much liquid as possible, Azelton said, “but it was impossible to get every drop out of every container.

“Looking back, putting the tube on the outside seems obvious, but that solution eluded us for five years,” he acknowledged.

Products with dip tubes on the outside are not unusual, he said — noting that oil additives are packaged with that technology — “though none of those on the market had ever been designed with a trigger.”

Rather than requiring a lot of tilting, tipping, shaking or pouring liquid from one container to another, “finally the last step in finishing a bottle is just to spray,” Clorox said in announcing the new technology.

Clorox initially redesigned a handful of products utilizing the new technology — including Formula 409 and Tilex — and began a soft rollout early this year. “So for a while the new products were displayed alongside the old-style containers that retailers still had on hand, but as they used up their older inventory, Clorox replaced it with the completely new packaging,” Azelton said.

The products were supported by humorous promotions.

For example, an online ad was built around a “super bottle makeover” contest in which the winner is the redesigned Bonnie Bottle, while the TV spots flashed back to Benjamin Franklin showing a friend a “smart tube” container he has invented, just as an eagle swoops down and flies away with the bottle, with the voiceover announcer hailing the “introduction … er, reintroduction” of the new technology.

According to Azelton, Clorox conducted consumer tests “to make sure the new design was right, and consumers love it.”

Azelton said he’s not aware of specific sales numbers but indicated consumer reaction to the new packaging has been very positive.

The technology has been added to about half of Clorox’s trigger-controlled bottles and will be rolled out to the rest over the next few months, he added.