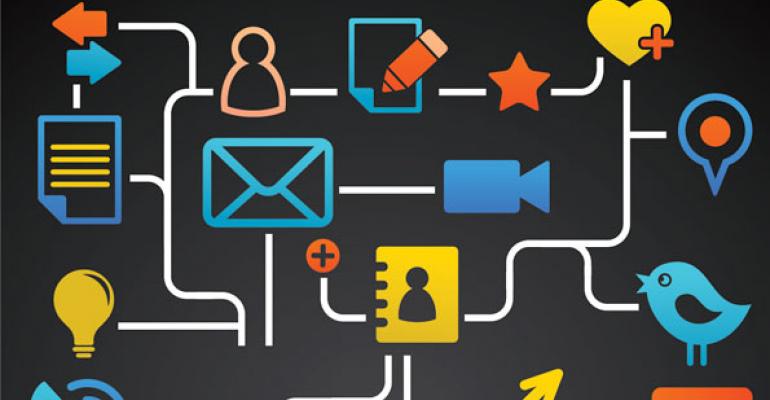 Shoppers have sparked many changes in the technology side of retailing, from mobile and social media to greater reliance on data-driven applications &mdash; trends reflected in SN&rsquo;s 2012 technology survey.

In January, at two industry conferences, two major North American food retailers both struck a similar chord in describing how they were structuring their businesses, and both companies pointed to a new emphasis on consumer demand.

“The customer [has gone from] being an afterthought to being right up front,” said Clinton Keay, senior vice president and chief information officer, Sobeys, Stellarton, Nova Scotia, at the National Retail Federation’s Annual Convention & Expo. 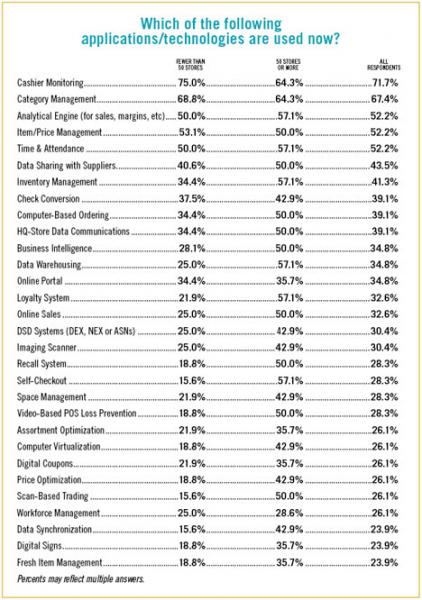 Consumers have generally been on the receiving end of retail and CPG manufacturer activities, which have tended to push products and promotions to them. But with the proliferation of mobile marketing and social media, consumers are increasingly in the driver’s seat. “Consumers are getting more control over what they want, where they want it and how they want to receive it,” said Bob Fassett, vice president, North America consumer products, retail and distribution leader, for Capgemini, New York.

For food retailers, this shift in control towards consumers has triggered many changes in the technology side of their operations, beginning with far greater attention to mobile and social media, as well as increasing emphasis on analytical and data-driven applications informed by consumer characteristics and demand. A recent cover story in The New York Times Magazine, “Hey! You’re Having a Baby!” described how Target leverages consumer data to figure out which female shoppers are expecting, and carefully steers offers for baby-related goods their way to sway their shopping habits toward the chain.

Those trends were reflected in SN’s latest survey of the technology used by food retailers, which forms the basis of this 18th annual State of the Industry Report on Supermarket Technology. The anonymous online survey was conducted by Penton Research, a division of SN parent company Penton Media, Feb. 13-24. Eliciting 46 responses from food retail and retail/wholesale companies, the survey covered the applications currently being used, and looked at what companies are doing with websites, mobile marketing and social media. It also investigated cloud-based applications, PCI standard compliance and ability to scan the GS1 DataBar.

As was the case last year, the survey drew the majority of responses from retailers with fewer than 50 stores (69.6%) and under $1 billion in sales (71.7%). The applications used by the larger retailers are broken out so that a comparison can be made between larger and smaller companies. In many instances, the smaller chains are showing a propensity for applications that are traditionally associated with larger operators. 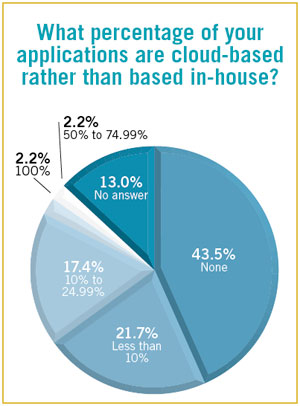 Among applications that surveyed retailers say they are currently using, systems that reflect the growing importance of consumer demand were often cited. For example, 43.5% of respondents, including half of those with 50 stores or more, said they were engaged in data sharing with suppliers.

Chains like Food Lion, a Delhaize America subsidiary, have made sharing of POS sales and inventory levels with suppliers the centerpiece of their go-to-market strategy. In a data-sharing pilot with PepsiCo, for example, Food Lion was able to reduce inventory and out-of-stocks in a distribution center and cut out-of-stocks in stores. It’s notable that data sharing, while pioneered by the likes of Food Lion, is not limited to large chains but is employed by smaller retailers as well, as the survey results indicate.

Another application that is driven by forecasts of consumer demand is computer-based ordering, used by 39.1% of respondents, including half of the retailers with 50-plus stores. Here again, the large number of smaller retailers using computer-based ordering (34.4%) is striking, considering that not long ago it was mainly used by midsized regional operators like Price Chopper Supermarkets, Schenectady, N.Y., and Hannaford Bros., Scarborough, Maine. But now a small chain like E.W. James & Sons, Union City, Tenn., has chosen to use this application in its 18 stores. Smaller retailers are willing to let automation take over a task, shelf replenishment, previously handled manually by store employees, because the application more closely tracks what consumers are likely to buy.

Category management, another application driven by POS sales data, is used by 67.4% of respondents, second highest on the list, with almost equal distribution between larger and smaller retailers. 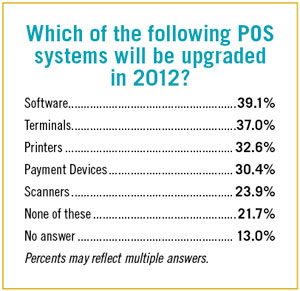 One of the most popular applications for small and large food retailers is an analytical engine that can that assess item and category movement, profitability and other metrics, with 52.2% of all respondents using it. Foodland, a Hawaiian chain of 31 stores, employs an analytical application to gain visibility into item performance, which helps with product selection,

Numerous data-based applications, such as price optimization, are now available on a software-as-a-service basis, residing in the “cloud” rather than inside a retailer’s premises. But many respondents (43.5%), including more than half of smaller retailers, said they don’t use cloud-based applications. Larger retailers were more prone to do so, with half accessing up to 25% of their applications through the cloud. 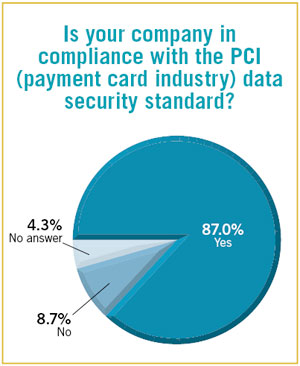 The most popular application in the survey is cashier monitoring, which takes advantage of POS data, but to target cashiers whose scanning falls outside of the norm. Three-quarters of all under-50-store retailers, and almost 72% of all respondents, use this application. The popularity of this application is not surprising given that employee theft is the largest source of shrink for food retailers.

POS systems are by far the most frequently upgraded system in a retailer’s arsenal. POS software will be upgraded by 39.1% of respondents and more than half (57.1%) of larger retailers in 2012. Even peripherals such as printers and payment devices are slated for upgrades by 23.9% and 30.4% of respondents, respectively. Impending changes in payment methods, including mobile payments and chip-based cards, are probably behind the upgrades in payment devices.

Data security at the POS continues to be a concern. In an effort to protect sensitive data, retailers are looking for help from such technologies as end-to-end encryption, as well as tokenization and EMV (chip and PIN) cards. In addition there is a new focus on the security needs of virtualized computing systems.

The PCI (Payment Card Industry) data security standard, which retailers that accept card payments are required to meet, is no guarantee of security, but it does provide a measure of protection. Recognizing that, 87% of respondents said they are in compliance with the PCI standard.

Overall, IT budgets for food retailers remain small, with 41.3% saying it is 1% of sales or less and another 26.1% reporting it to be between 1.1% and 2%. Almost half of respondents (45.7%) said they would increase their IT budget this year no more than 10% while another third (34.8%) said it would remain the same. No respondent plans to reduce IT spending this year. 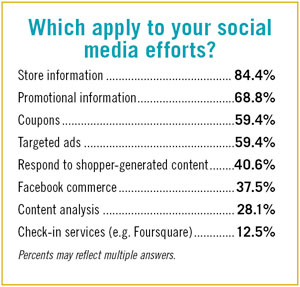 Digital applications of various kinds are a growing part of food retailer’s IT portfolio. Social media, for example, has attracted most large retailers and the majority of smaller merchants as well. “Consumers spend an ever-increasing amount of time on social networks, so it behooves retailers to extend their marketing into those networks,” says “Social Retailing Blueprint,” published in January by the Association for Retail Technology Standards (ARTS), a division of the National Retail Federation, Washington. Social media represents a very cost-efficient way to connect with consumers, the document noted, but added that “the industry is still experimenting with the most effective [social media] campaigns.”

In SN’s survey, 32 of 46 respondents (69.6%) addressed a question asking for details of their social media efforts. Store and promotional information topped the list of what retailers provide via social media, cited by 84.4% and 68.8% of respondents, respectively. Coupons and targeted ads are next, at 59.4%, though larger retailers are far more active with those strategies. Facebook commerce and response to shopper-generated content are employed by around 40% of respondents while content analysis and check-in services like Foursquare are still relatively uncommon.

Mobile marketing is fast becoming a mainstream activity among food retailers as every day it seems another retailer is announcing a new smartphone app. This year, more than half of respondents (54.3%) addressed a question asking for details of their mobile marketing efforts.

Coupons head the list of mobile marketing activities, cited by 52% of respondents that use mobile marketing. Some retailers, like Stop & Shop, allow shoppers to download digital offers on a smartphone to their loyalty card for easy redemption at the checkout. Digital coupons redeem at a much higher rate than freestanding-insert paper coupons — between 5% and 20%, compared with 0.9%, according to ABI Research, Moreover, digital coupons can reach shoppers, particularly of the younger variety, who don’t bother with paper coupons.

Food retailers are also using their websites, in concert with social media and mobile phones, to build brand equity and earn the loyalty of shoppers who are increasingly digitized in their shopping habits.

While coupons are becoming increasingly digitized, they are also changing in the physical world with the emergence of a new bar code, the GS1 DataBar. After two years of delays, manufacturer coupons bearing the GS1 DataBar as the only bar code are set to enter the marketplace in substantial numbers, with the expectation that most retailers will be able to scan and process them at the checkout.

The appearance of DataBar-only coupons in large numbers will signal the impending conclusion of an interim mode that began in 2008, during which time coupons have contained both the DataBar and the UPC-A bar code, the original coupon bar code introduced in the mid-1980s. The DataBar contains far more data than the UPC-A code (from 24 to 74 digits, compared with 12), allowing manufacturers to provide more complex coupon offers, while enabling retailers to automatically validate expiration dates and other promotion information.

In the SN survey, 54.3% of respondents, including 71.4% of larger retailers, said they can scan and process the DataBar on coupons. This reflects an ongoing trend in which independent retailers have lagged in their DataBar scanning capability. Among smaller retailers that can’t currently scan the DataBar, 26.6% expect to do so by 2013. The rest will be doing a lot of manual input of coupon information.

The DataBar, in a smaller version, is also being used on loose produce stickers along with the price look-up (PLU) number. Scanning the DataBar on loose produce eliminates the need for cashiers (or shoppers at the self-checkout) to key-enter the PLU number. The accuracy gained helps to reduce the shrink that occurs when organic or exotic produce is not identified correctly.

However, only 32.6% of survey respondents, including 42.9% of larger retailers, reported being able to scan and process the DataBar on perishables. Of those that can’t, half expect to be able to do so by 2013. 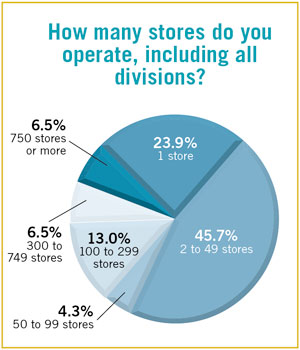 SN’s 18th annual State of the Industry Report on Supermarket Technology is based on a survey of 46 food retailing companies, including 38 retailers and eight wholesale companies with corporate retail stores. The survey was developed by SN editors and conducted Feb. 13-24 by Penton Research, a division of SN parent company Penton Media.

The job titles of respondents included CIO, CTO or VP of MIS (21.7%), president (21.7%), non-IT vice president (15.2%) and a variety of others, including director/manager and internal consultant.