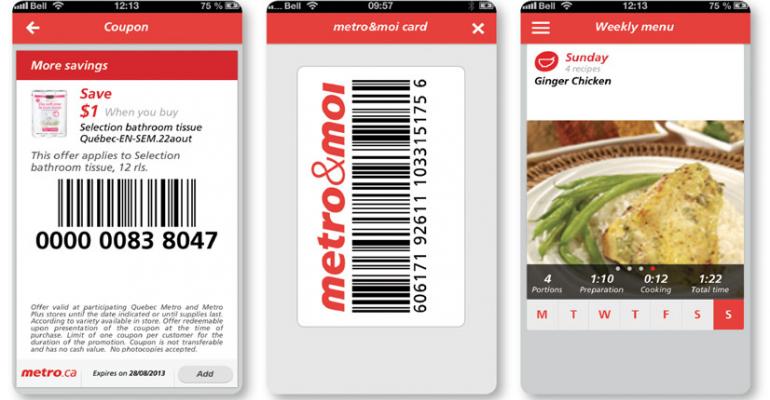 <p> Electronic coupons, left, and a library of more than 4,500 recipes, right, are part of the Metro &ldquo;digital ecosystem.&rdquo;</p>

MONTREAL — Metro’s partnership with Dunnhumby is helping the Canadian supermarket retailer provide an easier and more personalized shopping experience for its customers, according to the chain’s chief marketing officer.

In an interview with SN, Marc Giroux, vice president, chief marketing and communications officer for Metro, said working with Dunnhumby — the British loyalty marketing firm that also operates in the U.S. through a joint venture with Kroger Co. — has helped Metro develop an integrated platform that seamlessly blends its loyalty program with its website and mobile apps. Metro’s joint venture with Dunnhumby gives it an exclusive partnership for Ontario and Quebec.

Metro relaunched its loyalty program in 2010 with the metro&moi (metro&me in Ontario) program, and has since woven the loyalty program into what it calls its “digital ecosystem” offering coupons, recipes and other functionality.

“It has been very well-received by the consumer because we focused on what they were expecting in a loyalty program from a grocer,” Giroux said. “We delivered on what customers wanted, which is a simple program … that rewards you with dollar savings on your grocery bill.”

As Kroger did with its “Customer 1st” strategy that seeks to place shopper needs at the core of its decision-making, Giroux said Metro also approached its loyalty revamp with the customer’s needs foremost in mind.

“I came from 20 years of work in technology before grocery, and sometimes we were so focused on the technology that it was all about the technology and not about the consumer,” he said. “At Metro, we began this journey armed with a really customer-centric strategy.”

Giroux said Metro analyzed the “pain points” that customers encountered when planning their grocery-shopping trips, and then sought to find solutions that would help solve those problems through technology, and save customers both time and money.

As an example, he cited the shopping-list functionality of the digital system, which more closely mimics the way shoppers create lists in the offline world. Rather than sorting through various brands and sizes and flavors of yogurt, for example, shoppers using the Metro system can simply select “yogurt,” then see if there is a special deal being offered based on their past purchases of this product.

Working with Dunnhumby facilitates that level of personalization, he explained. All of the coupons and loyalty-program bonus offers are visible to the shopper via icons on the shopper’s screen throughout the digital ecosystem.

The digital system is also organized around the layout of the store, allowing shoppers to plan their actual trip through the store department by department.

Since launching the mobile app, it has become the most downloaded food-and-beverage app in Canada, and the number of downloads have been five times what the company anticipated, Giroux said. In addition, web traffic has increased 60% since the launch, he said. While all areas of the site have seen increased traffic, the shopping-list functionality and online coupon areas of the site have seen a disproportionate increase. Previously, the online sales flier had accounted for 50% of all website visits. (In Canada, about 65% of shoppers read the flier before going to the grocery store — a key factor in Metro’s planning of the digital ecosystem, Giroux explained.)

The system also includes more than 4,500 online recipes, which can be used to create the shopping list.

In Canada’s highly competitive food-retailing market, where Wal-Mart Stores and Target Corp. have in recent years joined a thriving discount-grocery segment, Giroux said the aim of the digital ecosystem was not necessarily to attract customers away from those competitors, but instead to provide its own shoppers with a better experience.

“The focus was, how do we improve the lives of our loyal shoppers and the people who love shopping at Metro, and how do we increase the perception of the great value we deliver by making sure that all of our promotional programs and loyalty bonus points become visible through that experience of planning to shop in our stores,” he said.