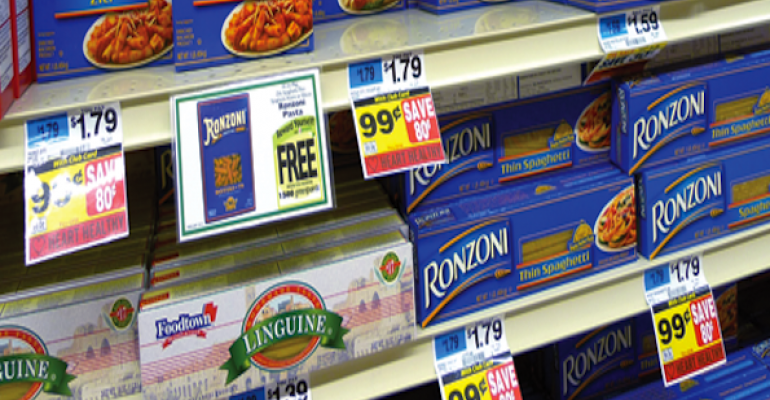 MT. VERNON, N.Y. — If you spend $300 or more per month at one of the nine Foodtown or three Freshtown stores operated by PSK Supermarkets here, company co-presidents (and brothers) Noah and Dan Katz want to know who you are.

These “top spending families” make up the core of the Katz’s longtime loyalty program, which tracks their spending habits and targets them for the most attractive promotional offers, in order to keep them in the fold as well as increase their numbers over time.

“We see gains in the number of top-spending families year on top of year,” said Noah Katz, who declined to provide specific growth numbers. “It’s what we focus on with the technology.” PSK also has a bonus program for store staff based in part on the number of top-tier shoppers the store serves compared with the previous year.

The program is based on software-as-a-service loyalty marketing technology provided by ProLogic’s Consumer Marketing Services division, Delray Beach, Fla. (formerly S&H Greenpoints, acquired by ProLogic last year), which delivers everything from points-based incentives to targeted offers. The platform, also used by other stores in the Foodtown cooperative as well as small chains such as Homeland and Harp’s, is designed “to appeal to retailers that don’t have large IT or CRM departments,” said Guy Keller,  senior vice president of sales & marketing for ProLogic.

PSK Supermarkets, whose stores are located within, and just to the north, of the New York Metropolitan area, was one of the first retailers to sign on to the program when it was introduced in 1999. PSK initially wanted the program to produce a 5% to 10% revenue increase over the previous year’s sales; it achieved that goal, “and generally compounded this increase each year since the onset of the program,” according to a white paper published by ProLogic.

In addition, Katz acknowledged that after accounting for the cost of the program, which he did not disclose, his company has realized bottom-line increases of about 1% annually. Keller said ProLogic charges a cost per store per week, plus the cost of points redeemed for gift cards offered via ProLogic.

PSK “has never raised prices to pay for this program,” Katz emphasized, adding, “The program pays for itself by holding onto more profitable customers. It’s a magnet that holds them to the store.”

It also works by increasing the number of visits that shoppers make to PSK’s stores. “The average family shops six times per month for groceries,” he explained. “They come to you three times and go elsewhere three times. What this does is get at least one extra visit to your stores. That extra business more than pays for the program.”

Katz said that promotions are funded in part by manufacturers but mostly by PSK, with markdown funds switched from generic deals to offers targeting higher-spending customers.

In addition to catering to top shoppers with promotions, the technology allows PSK store managers to identify and greet them at the checkout. Alerts indicating the presence of a top shopper used to be sent to managers’ beepers; that system is being replaced with text messages directed to smartphones. “The manager will ask them, ‘Is everything OK? Did you find everything?’ and help them bag up,” said Katz.

“Noah and Dan have done a fantastic job creating a loyalty culture,” observed Keller. “They make loyalty and taking care of their best customers a top priority.”

PSK’s loyalty program is driven by its Club Card, with more than 90% of its business processed through the card. The stores have had “virtually no dummy card use” — whereby cashiers use a generic card to allow card-less shoppers to get loyalty-card promotions — since the company started getting daily reports on cards scanned more than twice, Katz said, adding, “There’s so much value in the card that people want to use it.” Phone numbers can be entered into the POS system for people who forget their cards.

The points-gathering function of the card — 10 points per dollar spent — allows shoppers to get discounts on store products, often resulting in free items. “We have shoppers who have never paid for milk,” said Katz. Alternatively, shoppers can use their points to select from a variety of gift cards offered through ProLogic.  Katz calls the points incentives “a tie-breaker between us and the competition.”

The targeted offers made possible through transaction data collected on shoppers represents the “stealth marketing” aspect of the program. “We are utilizing data very effectively to market to customers and provide even more benefits based on who they are, what they buy and how much they spend,” said Katz.

Targeted offers down to the individual shopper level are delivered via several delivery mechanisms, including a separate checkout printer, email and traditional mail. Shoppers can print out the email offers, which are scanned at the checkout, or, increasingly, show them to cashiers on their smartphones, with the cashiers entering an offer code. “As technology has evolved, the program has evolved with it,” said Katz, who is beginning to experiment with offers on Facebook.

In addition, all stores associated with the Foodtown cooperative have recently introduced a mobile app that facilitates list-making and offers coupons downloadable to the Club Card.

ProLogic receives a constant stream of POS transaction data from PSK and turns it into “a world of reports,” Katz said, covering everything from sales trends to promotional results to retention rates. In addition ProLogic assigns a representative to work with PSK to develop a loyalty calendar as well as the targeted offers geared to top shoppers as well as other segments, such as new or lost shoppers or those interested in certain categories.

Katz said he has learned over time which promotions are the most effective. One example he gave is a store anniversary sale that starts with emails to generate awareness and offer some coupons. Shoppers who redeem the initial round of coupons are eligible for more so they “keep coming back,” Katz said, calling it the “boomerang theory.”