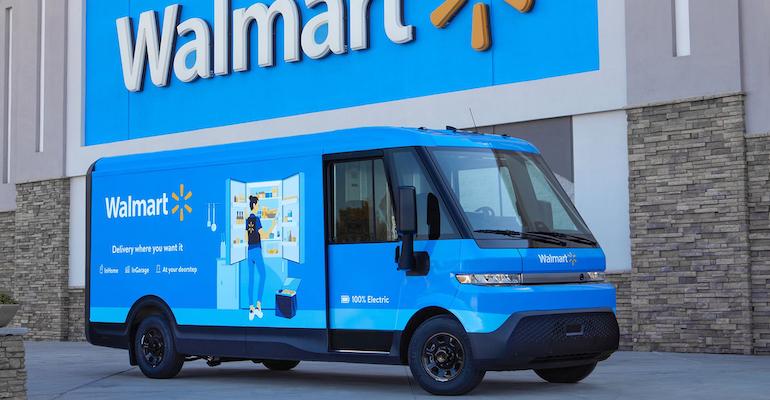 Detroit-based BrightDrop announced the deal this week at the 2022 Consumer Electronic Show (CES) in Las Vegas. Plans call for Walmart to use BrightDrop’s EV600 and smaller EV410 electric delivery vans for last-mile delivery of online orders, including for the expanding “food aisle to fridge” Walmart InHome delivery service.

The vehicles also will contribute to Walmart’s efforts to reduce its carbon footprint. BrightDrop said the EV600 is already in production, while the new EV410 is slated to become available in late 2023, when it could begin hitting the road for Walmart deliveries.

“As important as it is that we save our customers time and money through convenient delivery options, it’s just as important that we focus on creating a more sustainable last-mile delivery fleet that avoids emissions,” Tom Ward, senior vice president of last-mile for Walmart U.S., said in a statement. “BrightDrop’s proven ability to bring a sustainable electric van to market makes them a great partner to support our growing InHome delivery service, and we look forward to continue driving our goal of operating a 100% zero-emissions logistics fleet by 2040.”

The same day that BrightDrop unveiled the EV pact with Walmart, the Bentonville, Ark.-based retailer said it plans to expand InHome’s reach from 6 million U.S. households currently to 30 million households by the end of 2022. To that end, Walmart aims to add more than 3,000 associate delivery drivers this year and assemble a fleet of 100% all-electric delivery vans. Through the InHome service, groceries ordered online can be delivered directly to customers’ refrigerators, either via the front door or the garage.

Doug McMillon, president and CEO of Walmart, discussed the BrightDrop partnership in a virtual appearance during GM’s keynote at CES, following an introduction by GM Chair and CEO Mary Barra.

“Today, we’re announcing that we’re dramatically expanding InHome, taking it from being available to 6 million households to 30 million U.S. households. By the end of this year, we’ll support this growth by creating new roles for more than 3,000 associate drivers. This year, these will be our own experienced, vetted associates rather than independent contractors, and we’ll need a lot of vehicles to do it sustainably,” McMillon said via video.

“Those will be all-electric delivery vans. BrightDrop is an important part of this equation. We’ve been impressed with BrightDrop’s ability to bring a sustainable EV to market. So we’ve reserved 5,000 BrightDrop EVs that will begin hitting the road in 2023,” he explained. “The vans will not only be used to support InHome delivery in 2023, but also our broader last-mile delivery initiatives. This includes deploying BrightDrop electric vans to enable low-emission deliveries for other retailers and brands via Walmart GoLocal, our delivery-as-a-service business, which is being utilized by The Home Depot, Chicos and others, including small local retailers.”

“In the U.S. today, with partners like FedEx, we maintain our promise of free next-day and two-day shipping from our e-commerce fulfillment centers,” he said. “We can get orders delivered to customers’ doorsteps in two hours — and in some cases a lot faster than that.”

McMillon also cited electric vehicles’ role in Walmart’s sustainability initiatives. “Not only does the implementation of EVs support our goal of operating a zero-emissions logistics fleet by 2040, but it’s also supported by our growing infrastructure of 1,396 EV charging stations at our stores and clubs across 41 states,” he said.

BrightDrop publicly launched as a business at CES 2021, and its first EV600 electric light commercial vehicles were delivered to FedEx last month. Built on GM’s Ultium Platform, the EV600, was developed in 20 months before initial deliveries to FedEx, making it the fastest vehicle to market in GM’s history, the company noted.

“BrightDrop’s mission is to decarbonize the world’s deliveries. We leverage the best of two worlds: the innovation, agility and focus of a technology startup with the engineering and manufacturing might of General Motors,” BrightDrop President and CEO Travis Katz stated. “This combination, coupled with BrightDrop’s holistic solution set, gives us powerful advantages that uniquely position us to support the world’s largest delivery companies, like Walmart and FedEx, with their robust sustainability goals.”