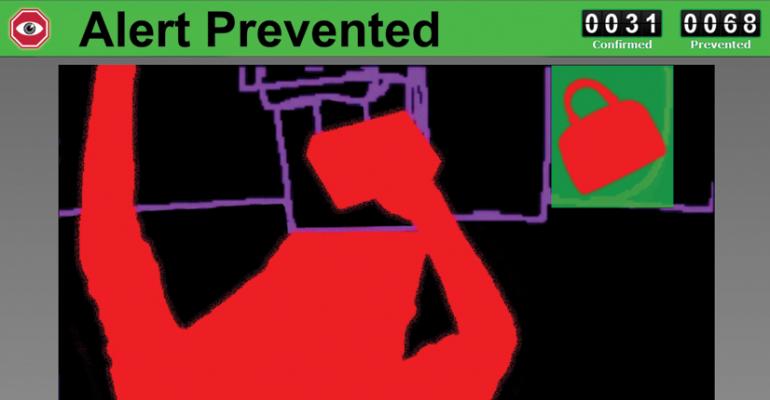 <p> The system recognizes when a non-product is placed on the belt.</p>
News>Retail & Financial

BOLIVAR, Mo. — A few weeks ago at a Woods Supermarket, a female shopper, whose activities were caught on a surveillance camera, tried to pull a fast one at a self-checkout lane.

She had two, 10-pound rolls of ground beef, priced at about $40, in her shopping cart along with a two-liter bottle of a soft drink and a package of cookies. After looking around to see if she was being watched, “she scanned the two-liter pop and the cookies, paid for them and put the bag on top of the meat in the cart,” said Doug Haworth, director of loss prevention at Woods Supermarket here. “Then she walked out the door.”

Haworth knew all of this because Woods, which operates eight supermarkets in Missouri and one in Kansas, as well as two convenience outlets, subscribes to a video analytics service, StopLift Checkout Vision Systems, Cambridge, Mass., that captured the entire incident on video.

The technology is able to watch checkout activities at both regular and self-checkout lanes via ordinary surveillance cameras and flag illegal behavior like sweethearting by cashiers or theft by shoppers — or just innocent scanning snafus — for later review and response by loss prevention executives and store personnel.

Woods has employed the StopLift system for two years at all 85 lanes in its nine supermarkets, including two stores that use it at their four self-checkout lanes. The system has saved Woods “a significant amount of money” by ensuring that products are scanned correctly at both regular and self-checkout lanes, said Haworth. (Sweethearting has not been detected — see Page 3 of this story.)

“StopLift dramatically decreased shrinkage coming out of the self-checkout lanes,” Haworth said. He declined to cite the cost of the StopLift service, but said Woods has recouped its investment “tenfold.”

On the other hand, he acknowledged the additional investment in labor needed at the corporate and store level to analyze and leverage video results sent by StopLift. The system also requires stores to have video cameras — Woods already did — and to install a video analytics server that sends video to StopLift via the cloud. Another challenge is addressing the concerns of store employees about being scrutinized by the system. To counter that, Haworth said he uses the video results as “positive reinforcement” with employees.

StopLift’s video analytics is able to identify self-checkout problems for later review, but in the second half of this year the vendor plans to release an upgraded application called Self-Checkout Accelerator that flags issues in real time. The Accelerator was demonstrated last month at the National Retail Federation Conference & Expo in New York by StopLift, as well as by NCR and Fujitsu, which have integrated it into their POS systems. Pricing for the new system is “still being figured out,” said Malay Kundu, chief executive officer of StopLift.

The Accelerator can send an immediate message to the Woods employee manning the self-checkout area — called remote assistant personnel (RAP) — who can engage customers, suggesting that they may have neglected to scan some items, and giving them a chance to correct their oversight. Haworth calls this approach “aggressive hospitality” and it’s used whenever a RAP attendant observes suspicious customer behavior.

The Accelerator will also prevent the RAP from accosting the customer unnecessarily — as when she puts her purse on the conveyor belt; the system will recognize it’s not a product and override the alert, thereby improving the customer experience.

Haworth said he plans to adopt the Accelerator when it becomes available so that “the RAP attendant will get alerts while the customer is still there.” In some instances, attendants would pass a real-time alert to the store manager or defer to the customer. “In this day and age, if the customer is belligerent, we let them go and do a police report,” he noted.

StopLift, which is also used by Smart & Final, Big Y and Tesco, is among a growing number of video analytics companies that are helping with retailers with everything from loss prevention to inventory control. For example, Datalogic’s Lane hawk BOB system is employed by hundreds of stores to prevent items at the bottom of the basket from going unscented, including some ShopRite outlets belonging to the Wakefern Food cooperative. “Lanehawk helps us identify items that the cashiers may or may not see,” said Natan Tabak, senior vice president, Wakefern Food, Keasbey, N.J., during a session at the NRF Conference.

Also at the NRF Conference, Scopix Solutions, Burlingame, Calif., showed how its video analytics system can identify inventory gaps and send alerts to employees to fill them before they become ongoing out-of-stocks. In a post-NRF webinar, Paula Rosenblum, an analyst with Retail Systems Research (RSRresearch.com) pointed out other applications of video analytics and heat sensors such as dwell time and queue management, traffic counting and planogram compliance. “Video analytics are here to stay,” she said.

However, Haworth offered that “retailers as a whole underestimate what gets lost at the self-checkout — I did. If it’s not managed properly, it sure can be an area of shrink.” But he added that only “a very small percentage of customers” deliberately try to steal at the self-checkout.

According to StopLift’s Kundu, self-checkout tends to have between 50% and five times more “scan avoidance” than conventional checkout, based on his company’s video analysis.

Haworth emphasized that he uses StopLift not only to deter theft but as a training tool for employees. Sometimes cashiers are distracted or neglectful and fail to scan something — a tendency that can be corrected when they see it on video. At the self-checkout, the video shows “customers who are confused and don’t scan all the items,” or instances where the RAP failed to scan an item or remove it from the cart when called to the lane to help a customer.

As for the woman with the purloined beef, the current StopLift system captured her likeness, but because she paid with cash, her identity has proved elusive. “Nobody recognized her but the stores will be watching out for her,” said Haworth.

If she returns to the store and is recognized, she will receive a heavy dose of aggressive hospitality, said Haworth. The RAP employee will “stand with [her] at the scanner and say they want to make sure ‘everything works well for you,’” he explained. “If they had ill intent, they can’t do it today. And if it was an honest mistake, they’ll think, ‘Woods really cares.’ We do it with a smile on our face.”

Over the past six months, in three cases where intent to steal was clearly shown by StopLift video evidence, Woods won shoplifting convictions, he noted. The chain is also about to roll out a loyalty card program that should help with customer identification.

Sidebar: No Sweethearts at Woods

BOLIVAR, Mo. — While the video analytics provided by StopLift Checkout Vision Systems has proved effective in identifying “sweethearting” — cashiers deliberately not scanning items — Woods Supermarket has not identified a single case in the two years it has employed the system at its nine supermarkets.

Woods has focused instead on using the system to correct cashiers’ inadvertent scanning errors.

But how to explain the lack of sweethearting? It could be the deterrent effect of the system, but Doug Haworth, director of loss prevention, Woods Supermarket, also attributes it in part to an “honesty and integrity” program in place before StopLift was adopted. “We tell cashiers there is an opportunity [for sweethearting] but we ask them to be honest and not to do it,” he said.

Before the program, Woods had a couple of cases of sweethearting, but none since. “It sounds hokey, but it appears to work,” said Haworth.