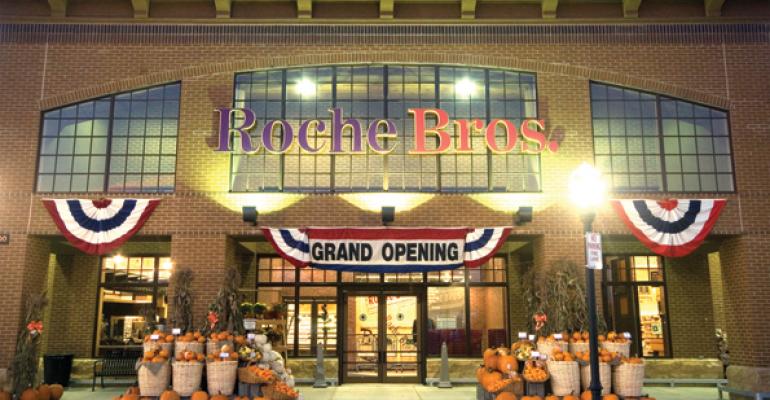 &ldquo;The values of my father and uncle who founded the company were simple &mdash; treat the customers and vendors and associates the way you want to be treated, and that&rsquo;s the way it stands today.&rdquo; &mdash; Ed Roche, chief operating officer, Roche Bros.

WELLESLEY HILLS, Mass. — Most people would probably not cite the local supermarket as their first choice to cater their wedding — unless they happen to be customers of Roche Bros.

“You really have to trust a retailer to give them your wedding, and we do a lot of weddings here,” said Gary Pfeil, president of the 18-store chain, in an interview with SN. 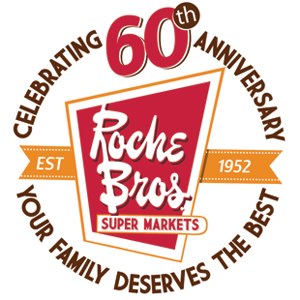 He said the family-owned chain, which is marking its 60th anniversary this year, owes much of its success to its commitment to offering a high-quality product to its customers and to its strong relationships with its workers. Those elements have given it a premium positioning in its marketing area around Boston.

“When it comes to giving great service, a lot of people talk the talk, but we walk the walk,” Pfeil told SN. “If you go back to the beginning, Buddy and Pat Roche opened a small meat market, where they had a one-on-one relationship with people — they were always talking to their customers, and I think that spirit of Buddy and Pat carries on very much today.”

Pat Roche, who died earlier this year, founded the chain with his brother Buddy in 1952, opening a 450-square-foot meat and produce shop in Roslindale, Mass., with the slogan, “The Best Meats Sold Anywhere.” 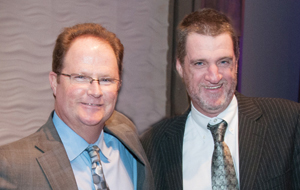 The chain, which today generates sales estimated at close to $600 million, remains family-owned, run by brothers Ed and Rick Roche (pictured) as chief operating officer and chief executive officer, respectively, along with Pfeil as president.

“The values of my father and uncle who founded the company were simple — treat the customers and vendors and associates the way you want to be treated, and that’s the way it stands today,” Ed Roche told SN. “Our mission is of course quality and service, and we add to that cleanliness.”

As the chain has grown, it has added larger and larger stores and more and more services, with its focus on strong perishables and perimeter departments like deli, bakery, meat, seafood and produce. It has also opened three stores under the Sudbury Farms banner. 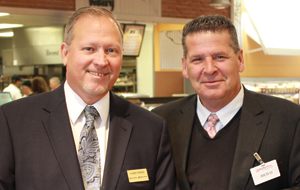 “It has continued to grow and grow and grow,” said Pfeil (pictured with Rich Ordway, facilities director). “And the feedback we get from it is fantastic.”

Other initiatives that have gained traction in recent years include home delivery, which is showing considerable promise, Pfeil said, and self-service hot-food bars, which have now been rolled out to more than half a dozen locations.

“The self-service bars are working out very well,” said Ed Roche. “It was an initial shock for the customer, but they end up buying more, and it also ends up saving us some service hours.”

Perhaps the most significant initiative under way at the company is a plan for a small-format store. The company has been opening larger stores over time — its typical new location now measures about 40,000 to 45,000 square feet, more than double the size of the stores the company was opening in the 1960s and 1970s — but now it is looking for sites where it could open a store in the 15,000- to 25,000-square-foot range, focusing heavily on perishables.

“With competition coming in like it is, and with CVS and Walgreens and Wal-Mart all selling groceries now, it’s gotten a little crazy, so we are trying to develop a format where we are competitor-proof,” said Roche. “We are trying to develop a small format that we can take into cities or more high-density population areas where we can go in and do more perimeter, perishables sales, with a smaller quantity of groceries, and just do what we do best.”

He said Roche Bros. has been looking at several potential locations to test the new format, but has not yet found a suitable site.

Roche stressed that the company’s current 40,000-square-foot box “still works” and that it will continue to seek out such sites as well.

“With all the competition doing what they are doing, we felt we wanted to try something different,” he said. 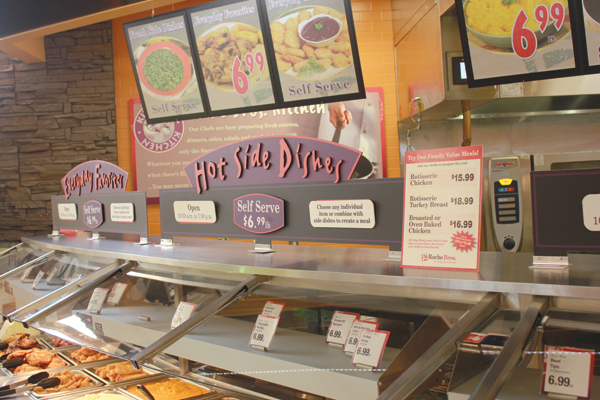 That competition includes a new incursion from Rochester, N.Y.-based Wegmans Food Markets, which opened its first Massachusetts location one year ago this month in Northborough, with additional locations planned. In addition, Whole Foods Market has a strong presence in the area and continues to grow, as does another strong local operator, Demoulas Market Basket.

“Wegmans is a fine retailer, and in our estimation, competition from Wegmans, as well as Market Basket, Stop & Shop, Whole Foods and Shaw’s, will only make us better,” said Pfeil. “But today competition is not only in our channel, it’s also in the other channels of business that 10 years ago didn’t exist to the level they are now — from club stores to drug stores to dollar stores to gas stations — everybody today is selling groceries.

“We’ve got to continue to refine our offer and make sure it’s compelling, so we give people a reason to come here.”

Roche Bros. has maintained its relatively high-end positioning in the market despite the weakness in the economy that is constraining consumer spending.

“I think, by and large, people are having to make choices about what they purchase and don’t purchase, and they are a lot more careful with their dollar than they were when the economy was great,” said Pfeil. “We just need to continue to put a compelling offer out there.”

Asked if Roche Bros. was pressured to lower its price positioning in the market because of the economy, Pfeil said that is not really the banner’s identity.

“I would say we want to make sure we have a fair offer out there, but Roche Bros. is a premium brand, and we’re not really looking to change our brand.

“We might be more competitive in some areas, because the market demands it, but it’s not really changing our brand. We feel we have a very defendable position, and we like where we are.”

Roche Bros. is supplied by Cheshire, Conn.-based wholesaler Bozzuto’s, as well as a network of other suppliers, and also sources private label through Topco Associates, Skokie, Ill.

Investing in efforts like online ordering can only help the company’s image as a service provider, Pfeil explained.

Although he declined to discuss sales volume of the home delivery service, Pfeil described it as “a big and growing business.”

“It’s a valuable service to our customers,” he said. “It’s popular with young mothers, the elderly, people that can’t get out, people who are working in their homes, and we see it as a pretty big growth vehicle going forward.” 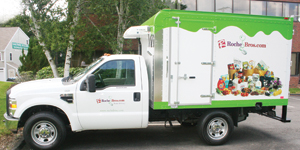 The company has a fleet of three-compartment vans with sections for frozen, refrigerated and ambient-temperature storage.

“When the business is strong enough, it is sustainable, and we are finding ways to improve our profitability, and provide a service that’s very needed in this marketplace,” Pfeil said.

The company also continues its strategy of deliberate expansion through new traditional store locations, primarily in its core marketing areas around Boston.

“When we can expand and it is in the right area, we certainly will, but we are not impatient about expansion,” Pfeil explained. “We just want to make sure wherever we go the brand fits in the marketplace, and we will be successful.”

The high service levels at the chain are key, Pfeil and Roche told SN, and stem from a familial culture at the company where employees are deeply engaged.

“Our people go above and beyond,” Pfeil said. “I could tell you 100 stories about associates who pulled apart a whole case looking for someone’s diamond ring, or fixed flat tires in the parking lot, or sent customers’ orders home when they forgot their checkbook.”

He cited as an example a fire that damaged one of the stores last year. When other employees learned of the fire at 11 p.m., “hundreds” of workers showed up to clean the store and restock the shelves to get ready for a 7 a.m. opening the following day.

“There is a responsibility of this ownership to the people, that is very uncommon in business today. The family certainly understands that they would not be successful without the support of the 4,200 people who work for us. It’s a two-way relationship. The associates feel it and the ownership feels it.

Roche Bros. prices itself on never having laid off any of its employees, who rally around the service culture at the family-owned chain. Growth as been steady and deliberate for 60 years, resulting in 18 locations, all in the Boston area and southern Massachusetts. In honor of its 60th anniversary, Roche Bros. last month kicked off 60 days of celebration, featuring retro pricing specials and other events.

• 1957 The first store expands to include grocery offerings.

• 1959 The Roche brothers open a second store in Needham.

• 1970 Roche Bros. opens in Westwood, with a store that includes a bakery, a florist and an in-store restaurant.

• 1983 Second store under the Sudbury Farms banner opens in Randolph.

• 2002 Replacement store in West Roxbury boosts size to 46,000 square feet, becomes state-of-the-art flagship for the chain as it celebrates its 50th anniversary.