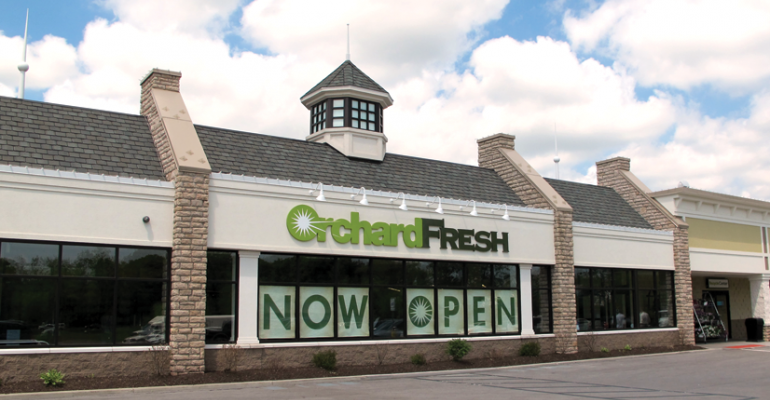 ORCHARD PARK, N.Y. — There are not many places to buy camel-meat burgers or a frozen python filet in western New York State.

Those items are certainly nowhere to be found at the traditional Tops Friendly Markets that blanket the Buffalo/Niagara region. Both offerings are on display, however, at Tops’ new Orchard Fresh format, an upscale, destination store for foodies that the company recently opened in this Buffalo suburb.

With a large, prepared-foods area as the centerpiece of the 30,000-square-foot store, and a strong focus on natural, organic and specialty product, sales at the new store have been performing “way above expectations,” Frank Curci, Tops president and chief executive officer, told SN during a tour of the store last week.

Curci said he thinks Tops could open “a handful” of the stores in each of its market areas, complementing its more traditional Tops supermarkets.

“It fills a hole in the market in upstate New York,” he said. “There are lots of players at the low end, and we feel now we have a vehicle for the upscale customers and communities.”

Orchard Fresh could eventually be rolled out beyond Tops’ current marketing area as well, Curci added.

“We think we have hit on a format that resonates with customers,” he explained.

The store, run by a separate operations team from traditional Tops stores, has radically rethought the traditional Center Store departments, eschewing traditional grocery brands almost completely in favor of local and niche purveyors. The emphasis is on the expansive perishable offerings, as well as the prepared foods island that occupies the middle of the floor space.

The store currently generates about 72% of its sales volume from perishables, said Kevin Donovan, director of Orchard Fresh. It carries about 150 varieties of organic produce, boasts a 36-foot service meat counter and counts among its suppliers between 80 and 90 local vendors.

“We like the theater aspect of the whole thing,” Donovan told SN. “That’s why it is in the middle of the store.”

Orchard Fresh went through a careful selection process in staffing the store, Donovan explained, estimating that about half of the 116 workers live an “organic and natural” lifestyle. Employees are also encouraged to be creative, and in fact helped develop many of the offerings.

Donovan himself came to Tops with a background working at gourmet specialist Balducci’s, and he also ran the “Conscious Corner,” a group of natural/organic lifestyle stores in Maryland.

“Anyone can put up a building — it’s the people that make the difference,” Donovan explained.

“We gave employees the opportunity to help create what they do in every department,” he added.

Employees contribute recipes — from meat marinades to coffee concoctions — based on their extensive knowledge and experience. In addition, about 150 signs around the store indicate staff “picks” of their favorite product, featuring photos of the employees who recommend the items.

Store-made offerings at Orchard Fresh include an extensive selection of sausages, super-sized doughnuts and other baked goods, fresh-squeezed juices — orange, grapefruit and tangerine — and value-added meats like stuffed quail, and mustard-and-pretzel-coated chicken.

The camel burgers, python meat and other exotics — including rattlesnake, kangaroo and alligator — are available frozen alongside the expansive meat selection. All meat products are antibiotic-free at a minimum, and many are natural.

Even the dry grocery offerings evoke an artisan feel, with 250 selections of craft beers, bulk coffee and teas, an extensive selection of salts and oils, and a grind-your-own peanut-butter station.

The store has a strong emphasis on healthful product as well, with 1,600 gluten-free offerings, and many items geared specifically for vegans or vegetarians.

“We have a huge focus on special diets,” Donovan said.

In addition to its focus on perishables ands specialty product, a key element to the success of Orchard Fresh, according to Curci and Donovan, has been its focus on being a “store of the community.”

With 18,000 square feet of selling space and well-signed navigation, Orchard Fresh makes for a quick, convenient shop, while at the same time allowing customers to linger in the seating areas at the front of the store and around the café.

“We wanted to create a coffee-shop feel,” Donovan said of the store’s design. “If they just want to wander around, and talk to our team members about something, they can, or if they want to hang out and watch TV or use the WiFi, that’s great.”

Plans call for adding online ordering and a catering service to the store’s offerings, while at Tops’ headquarters in nearby Williamsville, the real estate team is seeking to identify additional locations for further rollout.