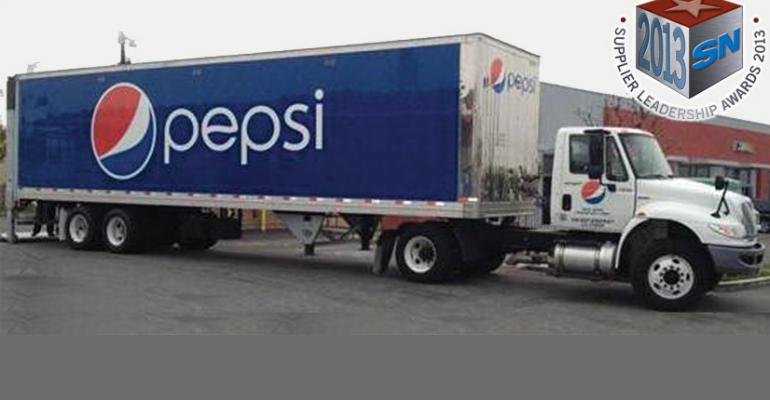 • PepsiCo has introduced a direct-store-delivery program called GEO Box at 70 locations that allows it to combine the beverage-delivery routes for both grocery and convenience stores on a single truck.

• GEO Box has allowed PepsiCo to increase the number of customers served per route by 15%, and cut its fuel costs by 5%.

• Because pallets are 100% built ahead of time, retailers benefit from increased in-store service as PepsiCo delivery staff are spending less time assembling orders at each retail stop.

PepsiCo beverage-delivery personnel can spend more time providing service in stores and less time assembling orders from their trucks with a new direct-store-delivery system in which pallets are assembled ahead of time.

The beverage giant has been rolling out the new system for the past two years. It replaces a previous DSD system in which deliveries to supermarkets and to gas/c-store accounts were made separately, using different trucks on separate routes.

In the GEO Box system, PepsiCo replaced its bay trucks with box trailers, which allows the company to prebuild pallets for each delivery at the warehouse. Each box trailer is equipped with a liftgate on the back for loading and unloading product.

“The new box truck allows us to make deliveries to both small- and large-format accounts from the same truck,” explained Ray Brown, senior director of supply chain go-to-market strategy for PepsiCo.

With pallets 100% built-to-order in the warehouse and loaded prebuilt onto box trucks, it eliminates the need for employees to pick product from bay trucks while making each delivery.

The switch to box trucks also gives the company more space to utilize in the trailer, Brown explained. The new system makes use of dual jacks that can be used to deliver product to small-format and large-format stores, and it also allows for the use of half pallets for c-store deliveries.

“The use of half pallets gives us the maneuverability to make deliveries in [convenience and gas] stores where space can be limited,” Brown explained.

The rollout of the GEO Box delivery system has allowed the company to achieve cost savings and increased efficiency in its delivery process.

“GEO Box delivery allows us to increase the speed by which we make deliveries, and so far we’ve seen about a 15% increase in the number of customers we can deliver to on one route when using the system,” Brown explained. “It also allows us to reduce our fuel usage by over 5% in converted locations.”

For retailers, Brown said the benefits of GEO Box also include increased order accuracy and less time spent assembling orders while on site.

“Through the GEO Box system we can build pallets 100% to order, vastly increasing the accuracy of our order fulfillment and converting ‘parking lot’ time into ‘in-store service’ time,” Brown said. “This creates a more efficient delivery process for retailers and for our employees. All the time saved in routes and load-in is invested back into our customers in the store.”

Brown described the results of the GEO Box system so far as “very positive.”

“Customers continue to tell us they appreciate our work to make doing business easier and more efficient,” Brown said.

At the end of this year, PepsiCo will have been using this system in over 70 locations across the U.S. and Canada for two years. The company doesn’t have a timeline yet on the further rollout of the system, a PepsiCo spokesman told SN.

The shift to the Geo Box system comes amidst a massive revamp of the warehouse DSD system that was launched in 2011, based in part on new innovations in automation for case picking and load building in which a handful of highly automated warehouses feed prebuilt pallets to satellite warehouses, from which orders can be completed for store deliveries.

In addition, under the company’s “Power of One” strategy to combine the strengths of the company’s various divisions, PepsiCo in 2010 also shifted its Gatorade division to DSD from a warehouse-delivery system, following the consolidation of its largest bottlers into the PepsiCo Beverages Co.

“All of these projects are part of our broader effort to increase our productivity and efficiency, which ultimately enables us to better serve our customers,” Brown said.

Asked about PepsiCo’s initiatives on the DSD front during a conference call with analysts earlier this year, Indra Nooyi, PepsiCo’s chairman and chief executive officer, said the company would be able to update analysts and investors early next year.

“We’re doing a lot of things with our North American Beverage business,” she said. “We’re investing in brands, and all the brand equity scores are trending up nicely. We’re optimizing the supply chain to reduce costs, doing a lot of work on price-pack strategies. And while doing all that, we’re looking at structural alternatives — sensible structural alternatives to improve profitability and return.”