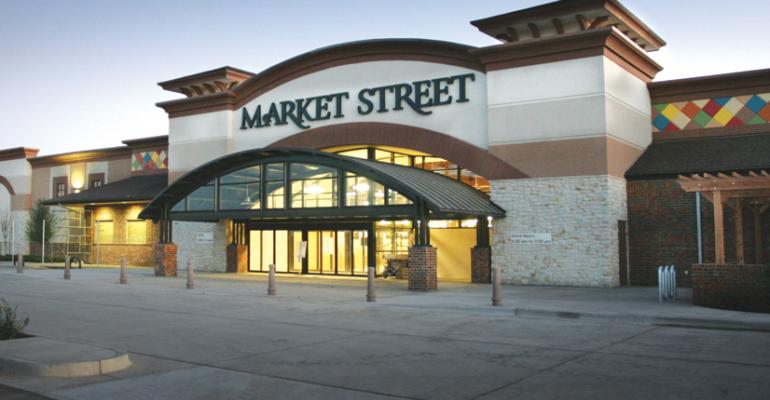 The store will have new checkout counters and updated flooring. All fresh food departments will be enhanced or expanded.

“I think the fresh departments are probably getting a much more visible overhaul than center store­ — for lack of a better term,” Eddie Owens, director of communications and public relations, told SN.

For instance, Owens said the produce department will be getting a “face-lift.”

“The coffee shop and deli areas will be updated significantly. We have an Italian kitchen in the Market Street store, and we’re going to be taking part of that out and replacing it with sushi.”

Sushi bars at other Market Street locations have been well-liked by customers, Owens said.

Much of Market Street’s offerings revolve around prepared foods, so the chain is updating its seating area at the stores, too.

“That’s a real niche for them to be able to get fresh prepared food that they can bring home for dinner, for example, when they are picking up their milk and eggs, too,” said Owens.

On the higher-end side, the location will begin to offer dry-aged U.S. Department of Agriculture certified Angus Prime Beef. One other Market Street meat department offers this product, and has proven popular with customers there.

“It is not cheap by any stretch of the imagination, but I had some for Memorial Day weekend or something — my first try of it — and it was the tenderest meat I’ve ever had in my life,” Owens said.

In addition to fresh foods, Market Street is also expanding up its health and wellness areas of the store with more supplements, and more bulk, natural, organic and gluten-free foods.

With the renovation, the company is working to improve the layout of the store.

“Guests will notice how we’ve opened up the aisles to make them more manageable. In the end, the updates should provide them a more enjoyable shopping experience,” said Wes Jackson, chief merchandising manager, in a prepared statement.

The remodels involve replacing the old banner logos with new logos outside and inside the store. The company is also updating its staff apparel to reflect the new color scheme.

Both logos incorporate a symbol of Texas, with the United Supermarkets logo including a Texas star and the Market Street logo using the state fruit — grapefruit.

“One of our chief positioning efforts across all of our brands is that first and foremost, we’re a Texas company. And so we wanted a logo that’s emblematic of that fact,” said Owens.

This remodel is part of a larger United Family initiative to remodel almost all of its 57 stores eventually, starting with its older stores.

The company originally planned to remodel five stores this year, Owens said, but then adjusted to three.

Keeping the stores open as the company renovates can be a logistical challenge.

“Some of the work, or a lot of the work takes place overnight, but frankly that’s not always possible so we have to move things around and close departments or relocate departments and make do the best we can,” said Owens.