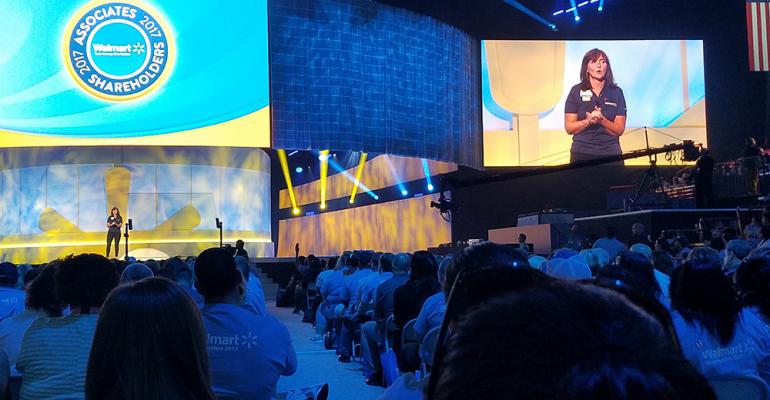 Wal-Mart Stores on Wednesday opened its annual Shareholders Week activities focusing on foundational progress the company has made since its first training academies opened just over a year ago.

Since March 2016, the retailer has opened 155 such facilities with plans to reach 200 later this year. The academies are located adjacent to top regional Supercenters and have become the vehicle through which the company has driven process change that officials said have contributed to Walmart’s recent sales momentum, while reducing turnover and creating happier and more satisfied workers, Judith McKenna, Walmart’s U.S. COO, told a gathering of journalists visiting a Walmart academy alongside a store in Fayetteville, Ark. That is helping Walmart capture more sales at retail through better customer service and improved execution of the basics in stores like on-shelf availability. “The training program isn’t just for the here and now,” McKenna said. “It actually creates a platform for us for the future for everything else we want to do.”

Walmart established new training procedures as part of its $1.7 billion investment in employees announced in 2015, which also included wage increases, and has underpinned an operational rebound that also included new rounds of price investments and expansion of e-commerce. Around 250,000 U.S. Walmart employees will undergo academy training programs this year, which can last between two to six weeks. The program’s current focus is on department managers, assistant store managers and newly promoted workers, said Tom Ward, VP of U.S. central operations for Walmart, and includes a mix of classroom training and exercises on the floor of the adjoining stores.

These employees are being trained to execute any number of duties and store processes that have been re-engineered over the past two years under Walmart’s U.S. leadership team including McKenna and Mark Ibbotson, Walmart’s U.S. EVP of central operations, who ran a similar training program at the company’s Asda chain in the United Kingdom prior to their U.S. assignment. Ibbotson referred to the process changes — which touched virtually every duty employees have at a store — as “one best way” strategy that encourages standardization across stores. Officials demonstrated teaching methods including virtual reality to prepare workers for real-life situations and simulated shopping missions for customers.

A panel of recent Walmart academy graduates testified that the program was helping them and their co-workers to find more meaning and direction in their careers, in part because it demonstrated that supervisors were vested in their work.

“A lot of associates would get upset and leave the company because they felt they weren’t getting the proper training,” C.J. West, an assistant store manager in Fayetteville, said. “Their department managers, their supervisors, even their assistants weren’t involved. Now if you get the people the right training and allow them to develop and grow, you have a better chance at keeping your people. I know I wouldn’t want to work at some place where I wasn’t trained, and that’s happened here in years past.”