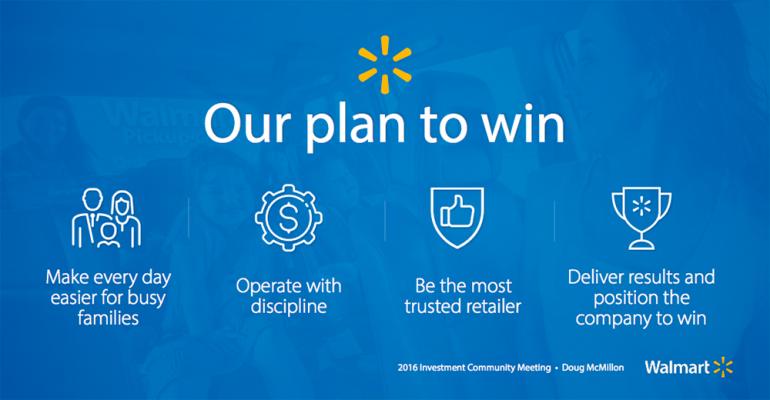 Walmart to investors: Investments will be worth it

For a second straight year officials of Wal-Mart Stores delivered disappointing news to Wall Street at its annual investor's day meeting, but wrapped it this time in the growing confidence that the heavy investments that continue to put earnings under pressure were showing some measurable progress, particularly in the U.S. where investments in price and freshness are hitting their mark.

"We really feel like we're on solid footing on Walmart U.S. and we're really starting to play some offense and operate from a position of strength," Doug McMillon, Walmart's CEO, told investors at the event Thursday morning at its headquarters in Bentonville, Ark.

A year ago at the same event, Walmart outlined a grim three-year earnings forecast that sent the company's stock tumbling as investments in store employees and e-commerce would weigh on results amid modest sales growth. While officials maintained those figures this year, it said additional investment in newly acquired e-commerce platform Jet.com would likely result in earnings hitting the low end of expectations during the fiscal year ending in February of 2019, the final year of the period. That accompanied a modest 3% drop in Walmart stock on Thursday.

Walmart is adjusting to the diminished outlook in part by slashing capital expenditures for next year and reducing U.S. new store growth to just 55 stores — levels not seen in decades —but officials said the those changes were positive.

Greg Foran, CEO of Walmart U.S., said the company would increase remodeling activity next year from 400 stores this year to 500 in 2017. He said the remodels, particularly at Neighborhood Market stores, would be made with an eye on helping stores achieve profitability faster and resembling the new fresh-focused prototype that opened this spring in Fayetteville, Ark.

"Some of you've asked, why we don't open more Neighborhood Markets. Well, we think we're onto something here," Foran said. "We've got nearly 695 Neighborhood Markets at the moment, we'll have probably 699 by the end of the year. [But] we need to get more of the existing stores starting to look like [the Fayetteville store], and I can tell you, that takes quite a bit of capital."

The "Fresh Angle" initiative to improve sightlines, presentation and turns of produce in stores in having a positive effect on traffic, comps and basket sizes of fresh items, Foran added, as well as customer impressions of how well Walmart is executing in the departments. He said Walmart's impressions of the department as measured by surveyed customers improved by 7% from the same period last year. "That's a pretty big shift," he said.

Foran said Walmart's previously announced plan to invest "several billion" in lower prices over three years kicked off this spring once officials were satisfied that improvement in stores provided momentum, but Foran declined to elaborate on geographies or merchandise categories where the company was implementing the lower retails.

"We'll be rational about this," McMillon was quick to add. "I don't want an overreaction to the price component."