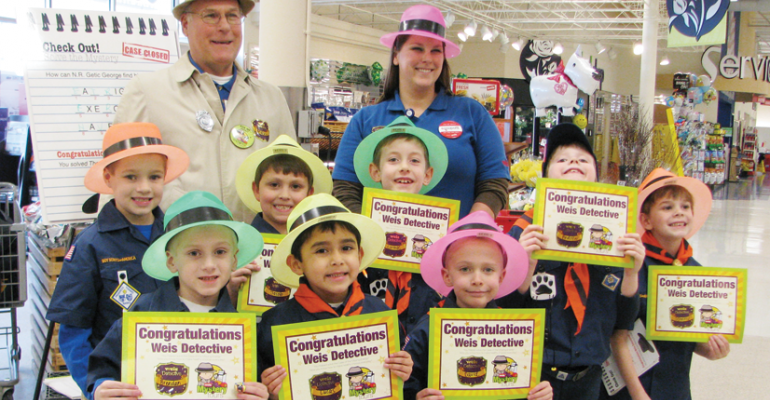 Most kids love a mystery, right?

Knowing that, Weis Markets’ dietitians developed a program that teaches youngsters about eating healthier, even as they’re absorbed in solving a “mystery.”

The chain’s proprietary Mystery Tours send second, third and fourth graders into the produce aisle and other parts of the store searching for clues to solve The Case of the Missing Energy.

By now, the program has captivated thousands of kids — and their parents and teachers — in Pennsylvania, New York, New Jersey and Maryland, officials say.

“Our mission with the Mystery Tours is to combat childhood obesity through education,” Karen Buch, registered dietitian and Weis’s director of lifestyle initiatives, told SN.

“The program brings children and their families into our stores for a real-world educational experience.”

Weis has taken big measures to make the tours attractive to youngsters, decking out each kid as a detective. They’re given neon hats, spyglasses, writing pads so they can take notes, and detective badge patches. At the end of the tour, they receive a certificate indicating they’ve solved the mystery.

The mystery program features the fictitious character Energetic George, who has lost his energy but doesn’t know why. The children are charged with finding out what happened to George’s energy. Is it because he doesn’t eat red peppers? Or broccoli? Or red meat? Or drink enough milk?

During the course of the tour, they kids learn about different vegetables and how important their color is related to the energy-giving nutrients they contain.  They also learn what a serving size is.

“If it’s a cup, we have them put their little hands together, as if they’re holding something, and we tell them that’s approximately a cup,” Buch said.

“Produce plays a huge role in the tour, but then we go to meat and dairy departments, and to grains, and then to the beverage department. There we tell them how important plain water is, and that they should not choose real sugary beverages.”

While looking at some drinks on the shelves, the kid detectives literally measure and count out the number of teaspoons of sugar, which would be the equivalent of the sugar a particular beverage contains.

In addition to teaching kids about nutrition, the program helps build good relationships with the community, especially with schools and educators.

“Teachers love it when we help make their job easier,” Buch said.

Take-home materials  keep facts about good nutrition on children’s radar. Among the Mystery Tour hand-outs are colorful booklets on nutrition and one called, “Kids Can Cook,” which offers simple recipes featuring healthful ingredients.

The fact that the program is so interactive at each station makes it unique, and an effective teaching tool.

“We had a college professor from Keystone College bring his psychology students in to go through the program,” Buch said. “They were interested in how we brought the facts out through interactivity.”

It’s the interactivity that’s most often mentioned when parents and teachers comment on the program.

One third grade teacher from State College, Pa., said this about the interactive part of the Mystery Tour:

“When they [the kids] needed to look themselves for what was being discussed, it helped them remember it. … It made an abstract concept concrete. Now, they’re analyzing their family’s grocery items while shopping.”

A lot went into planning and organizing before the company was ready for the official launch that put the program into a selected 60 of the Sunbury, Pa.-based chain’s 165 stores.

The 60 stores are in heavily populated areas, often with  more than one school district. But the tours, which are run year round, are not limited to schools.

“We’ve had summer camp kids and scout troops, and other organizations do the tour,” Buch said.

The concept of the Mystery Tours was Buch’s idea, and in 2007, a pilot program was tried in three stores. They were successful. Other stores were added in the next year when research data had been made public that obesity has its start in children’s formative years, Buch explained.

The program’s corporate launch, however, didn’t come until 2010 when details had been worked out and enough tour guides had been trained.

The number of participants in a Mystery Tour is limited to 25 and then the group is split into two. So two tour guides — Weis associates — are required for each Mystery Tour.

“We work with our HR department and individual store managers to choose candidates to be Mystery Tour guides,” Buch said. “Associates apply to be a tour leader and they’re chosen based on personality and their interest in working with kids. We have a good virtual training program, which starts at the first station, produce, and takes them through to the last station.”