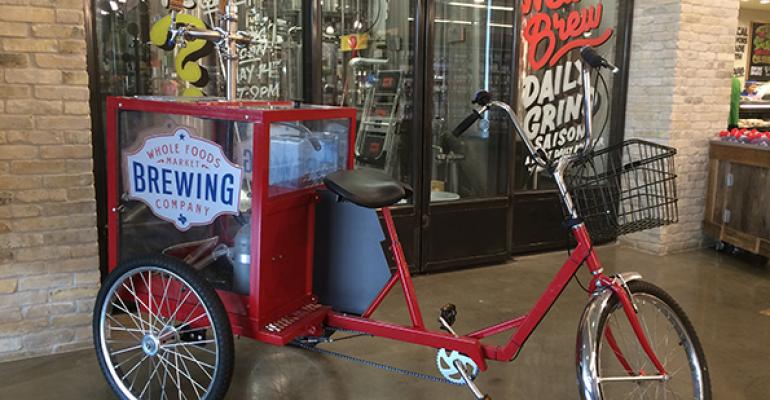 A new trend is brewing at Whole Foods

Shopping carts have cup holders for customers to store their beer glasses. A keg-equipped “beer bike” rides around the store transporting beer to shoppers. A brewmaster peruses the store to select new ingredients for his next recipe.

“We’re in a unique situation where we are a retailer and also a beer producer,” brewmaster Dave Ohmer told SN.

The brewery and store opened in November. A second on-site microbrewery opened in December in Emeryville, Calif.

New Beer Out Today: Saison of Liberty - an american dry hopped saison. Light easy drinking, with a nice hop aroma from the Lemondrop, and Simcoe hops that balences nicely with the spice from the saison yeast.

The microbrewery has a five-barrel, two-vessel brewing system made by Criveller, which specializes in high quality stainless steel tanks. Capable of producing up to 500 barrels annually, the brewery houses an on-site bar with windows overlooking the tanks, 20 taps (about 11 of which are Whole Foods beers), and seating for about 40, with additional seating in an upstairs mezzanine.

Just can't get enough of this view! #brewingatpostoak

Ohmer, who previously worked at a Tennessee brewery, and his brewing associate produce a new beer nearly every week. 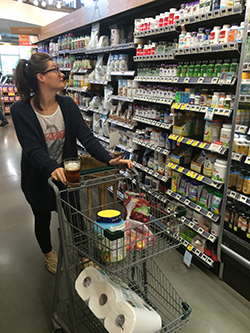 The beer is sold on draught in pints that sell for about $4 to $7, and in 32- and 64-ounce growlers. One of the biggest benefits of being located inside a Whole Foods supermarket is the immediate availability of fresh ingredients to use in beer recipes, said Ohmer.

Ohmer is free to roam the store to find the local produce, fresh herbs, spices and other foods to use in his flavor combinations.

“I have the biggest pantry of any brewer in the country,” Ohmer jokes.

Ohmer frequently consults with produce managers and other store associates to find out what’s new and in season.

“Our team members know much more about what’s in season than I do, so they are a big help to me in planning ahead,” he said.

Store-supplied peaches, grapefruit and pineapple are among the produce Ohmer recently incorporated into his brews.

While the brewery utilizes products sold in the store, the store benefits from the microbrewery as well. The bakery department, for instance, uses spent grains for fresh bread; the meat department uses the beer for beer brats; and prepared foods, for beer-battered fish and other recipes.

The brewery has immersed not only within the retail store, but also the local business community by partnering with fellow craft brewers for joint brews. Several collaboration brews have already been launched.

Just last week came the release of Cage Free IPK, a West Coast-style IPA fermented with Kolsch yeast. It is a joint brew from WFMBC and Southern Star Brewing Co. of Conroe, Texas.

Several months ago, the brewery introduced Whole Buffalo Saison, a partnership with Buffalo Bayou Brewing Co., also in Houston. Whole Buffalo Saison is a 7% ABV saison that incorporated Texas grapefruit and coriander along with hops from Germany, New Zealand and the U.S.

Both brews were released at beer dinners Ohmer hosted onsite.

More collaborations are on the way, said Ohmer.

“It’s a great way to dip into each other’s fan base and get more exposure,” said Ohmer. “We all benefit by the exchange of ideas.”