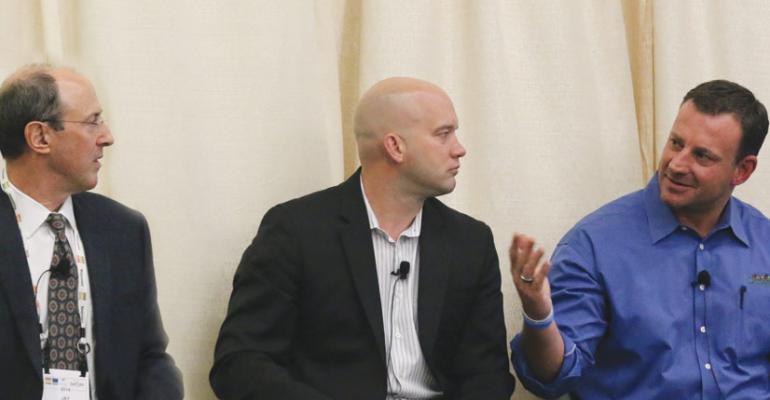 <p>Jay Jacobowitz of Retail Insights, left, with Chris Sherrell of Fresh Thyme and Jim Nielsen of Sprouts Farmers Market, who is speaking at right.</p>

Farmers’ market formats like Sprouts and Fresh Thyme are going after the transitional health-oriented consumer — one migrating away from conventional options on the road to becoming a loyal natural and organic shopper, executives from the two companies told an industry audience in Anaheim, Calif.

“Food is a $600 billion industry, and natural and organics account for $100 billion, and we consider our consumer to be anyone who buys food,” Jim Nielsen, COO for Phoenix-based Sprouts Farmers Market, said.

“But we look for the customer who’s looking for a stepping-stone to better health and who’s making the transition from the conventional to the natural world.”

According to Chris Sherrell, CEO of Fresh Thyme Farmers Market, Phoenix, and the former CEO of Sunflower Farmers Market, “We target traditional shoppers with middle- to lower-level incomes who want to move up and eat better — not the high end that Whole Foods goes after. So we try to draw the trial customer with special promotions to get him into the store and then help him transition.

“Because we offer a different shopping experience, getting that customer to become loyal to us requires authenticity. And now that natural food stores are becoming more mainstream, people are less afraid to come in, and the engagement we have with them is very different from what the conventional stores offer because our people really care.”

Jay Jacobowitz, president of Retail Insights, Brattleboro, Vt., said healthy foods have become a major draw for consumers. “For 100 years the supermarket model has relied on convenience. But is convenience still No. 1 with shoppers? Today fresh and healthy foods and wellness are challenging convenience.”

According to Sherrell, “Natural and healthy is a lifestyle, and it’s the future. People don’t go back to processed food.”

The executives made their remarks during a seminar entitled “Supermarket News at Expo West: Driving Health and Wellness at Supermarkets.”

Both Sprouts and Fresh Thyme rely on pricing to draw consumers, the executives said.

“It’s a question of sustainability. They can’t give away the farm on produce because that’s not their model, and they will always revert back to what they’re used to doing.”

Nielsen, of Sprouts, offered similar remarks. “We feel good about our value proposition. We have 14 price zones across nine states and are priced 20% and 25% below the market.”

He said he’s confident that approach will work as Sprouts enters Atlanta.

“Five years ago we could sneak up on people. For example, one of our stores [that was then operating under the Henry’s banner] shared a wall with a conventional retailer at a location in Southern California, and the manager of the chain store didn’t even know who we were before we opened — until we had a record-breaking opening day. Then we saw a lot of ‘suits’ coming through our store every day and checking us out, though they couldn’t figure out what we were doing.

“The chain did sharpen its pricing. But with a company of that size that’s doing less than 5% of its business in natural and organics, it’s hard to focus on one or two competing stores.”

For a company like Sprouts to succeed, “we have to keep relevant and innovative,” Nielsen said. “But we can’t be all things to all people. We have to stay within our segment and refine it, and that’s what we’ve done as we combined the Henry’s, Sunflower and Sprouts banners.”

Nielsen said the environment in Sprouts is different than in a conventional chain operation. “When you walk in, it’s a neighborhood store, with familiar people helping customers. Our guests like spending time with team members.”

He said Sprouts incentivizes employees with service awards and regular discounts of 15%, “and we empower them to make decisions in the stores because we need to differentiate ourselves from conventional retail.

“And when our executives visit the stores, we wear jeans, and we’re there to listen to find out things we can do better. It’s a distinct culture, and it’s the culture that builds the strategy.”