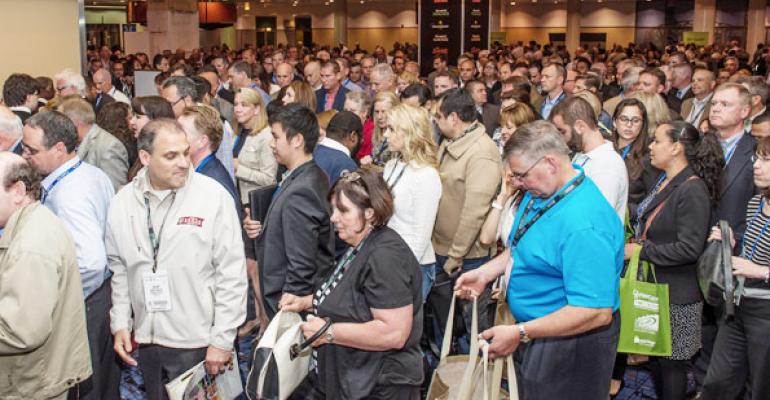 &ldquo;Everyone I spoke with at the show said they are bringing more people next year.&quot; &mdash;KEVIN DAVIS, Bristol Farms

Although some retailers and wholesalers said they thought attendance was a little lighter than they expected at FMI Connect and United Fresh 2014, they were broadly and enthusiastically supportive of the return to an every-year educational conference and trade show, and also appreciated having the event in Chicago again.

“I think it was a really good first step to bring the show back to Chicago,” said Kevin Davis, CEO of Bristol Farms, noting that relocating the show each year made planning more difficult for attendees.

Also, staging the show on an annual basis makes it easier for both retailers and vendors to keep it in their budgets from year to year, he pointed out.

He said he brought seven people from his company to the show this year, and plans to bring 20 next year.

“Everyone I spoke with at the show said they are bringing more people next year,” he said.

He cited in particular educational opportunities for store managers and for independent retailers (Davis is chairman of the Independent Operators Committee at FMI).

“We want to bring more store managers,” he said. “This is a great opportunity to get them energized, and they bring that back to their people in the stores.”

Other attendees said they were interested in everything from produce merchandising to educational sessions to the latest equipment and technologies. Following are comments from retailers and wholesalers interviewed by SN at FMI Connect and United Fresh 2014:

“I think it’s important, it’s viable and it provides value,” he told SN, adding that “Chicago is a great place to have it.”

Haaraoja, who gave a presentation about SNAP incentives for produce purchases, said SpartanNash sent 15 people to the conference this year.

In addition to his role as a presenter, he also said he was at FMI Connect and United Fresh to check out the equipment on display and to “see the trends in produce, and talk about new programs we can use in our store.”

She said Kroger plans to send representatives to the show every year. “I hope it's me, because I just consider myself a foodie,” she added.

She said her goals included networking and finding ways to bring ideas back to incorporate into her daily work. “And to also see what the latest and greatest trends are.”

Jill Webster, deli manager at Valley Natural Foods, a co-op in Burnsville, Minn., said she likes that FMI Connect is now an annual event, although she probably won't come every year.

“It'd be nice to have that option, because they have so many educational classes,” said colleague Jackie Dvorak, financial manager.

The two were the sole representatives of Valley Natural Foods attending FMI Connect this year. Webster said she hoped “to grow our knowledge” through the education sessions, and also to get ideas for the second location that her co-op is working on.

Erin Horton, chef at Top’s Orchard Fresh banner, who won in the “Side Dish/Mini-Meals” category of the Supermarket Chef Showdown at FMI, said she thinks an annual event is “fantastic,” adding that she looks forward to the Chef Showdown taking place every year instead of every two years.

“It was amazing,” she said of her participation in the competition. “It was a great time. We have chefs from all across the country that obviously don’t know each other, but we all do the same things.”

Other than competing in the Chef Showdown, Horton said she was at the conference “just really seeing what’s out there.”

“To me, because my store is natural and organic, [I’m not looking] so much at the food stuff, but the equipment and the technologies.”

“For me personally, the show is a good show,” she told SN. “I always find two or three vendors that I can work with.

“I will probably come every year until I find that it doesn’t benefit me coming.”

Quintero, who was the only one from her company at the conference, said she was looking at certain equipment at the show.

“I’m also looking for opportunities to bring aboard some new distribution lines from the United States,” she added.

As the purchaser for the international retailer that she represents, “My responsibility is to always look for whatever’s new on the market, for new opportunities and new vendors, direct lines, outfitting equipment because we’re building new stores,” she explained.

Bill Wall, a produce merchandiser at Fry’s Food and Drugs, Phoenix, who was interviewed with Jeff Haines, a produce manager at the Kroger-owned chain, said he thinks having FMI Connect every year is a good idea.

“I think it will be good for the industry as a whole,” Wall told SN. “It seems like there’s a lot to see, a lot to learn. I know we can benefit from it because I have people like Jeff and myself. We’ve already learned a lot and we’re looking forward to more.”

“I love the fact they combined [FMI] with United Fresh,” Haines added. “It gives it a bigger presence, and it should be really good going forward.”

Wall said he’s like to be able to come every year.

“I’d love to do something like take a produce manager and just walk them around and let them go to some of the events,” he said. “The organic session [‘Expanding Organic Sales Impact on Overall Produce Growth’] was outstanding. That’s stuff we deal with every day with our customers.”

Added Haines, “Someone who works in the store being able to see this and meet with some of the vendors is a great opportunity to experience.”

Overall, Wall said he hoped “to walk away with a better understanding of what the near future holds for us as far as produce.”

“Our big challenge is trying to find a consistent supply of organics, and have a consistent supply of other products, especially now that we have a lot of weather issues in California. Our customers don’t fully understand what’s going on in the world and expect cheap produce every day. They have to feed their families, and we have to make sure we help our customers.”

Jerry Golub, president and CEO, Price Chopper, Schenectady, N.Y., said he thinks “the goal of having an every-year show is excellent.”

“We need to continue to figure out how to add value to the show for retailers and for CPG companies, so they see the benefit of coming every year,” he said.

He said that among his goals at the conference, in addition to speaking on a panel on social media, was “seeking to understand what’s new in the industry.”

He said he likes the idea of having so many different facets of the industry — from technology and equipment to fresh foods — together in one place.

“It adds value to the experience of the high-level executives who attend the conference,” Golub said.

Price Chopper sent “about a dozen” people to the show this year, he noted, adding that Price Chopper “absolutely will support this conference every year.”

Safeway makes pharmacy the center of health and wellness
Jun 13, 2014