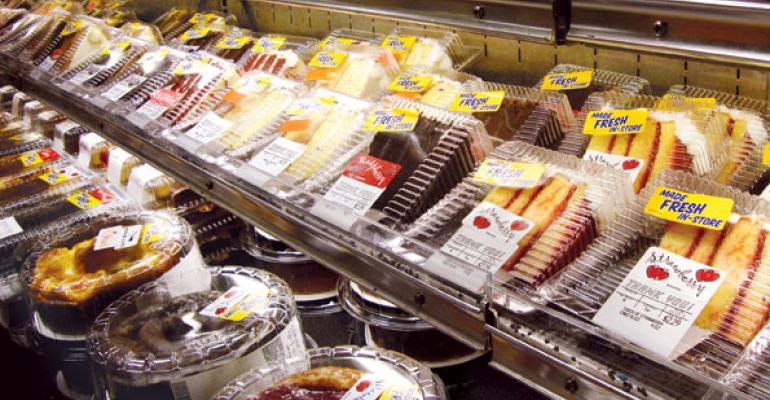 Retailers are having success with single-serve cake slices, and now are trying smaller-sized packs of everything from muffins to doughnut holes.

Some, like Harp’s Food Stores, Springdale, Ark., have been selling single-serve bakery items for years, but have recently pumped up their variety.

In fact, Harp’s is exploring sources right now for containers for its probably-soon-to-be-launched push-up cake pops.

“We haven’t introduced them here yet. We’re looking for packaging. They’re a twist on cake balls on a stick,” Danny Lane, bakery technician at the 70-plus-unit chain, told SN.

The cake version of an ice cream push-up pop layered with filling was a major attention-getter at the International Dairy-Deli-Bakery Association’s Show & Sell Center at IDDBA’s Seminar and Expo this June in New Orleans. Lane is a member of a team of retailers and suppliers that orchestrates IDDBA’s Show & Sell Center to give show attendees merchandising ideas.

All sorts of small cake items are being tried by other retailers, and many have already proved their sales worthiness. 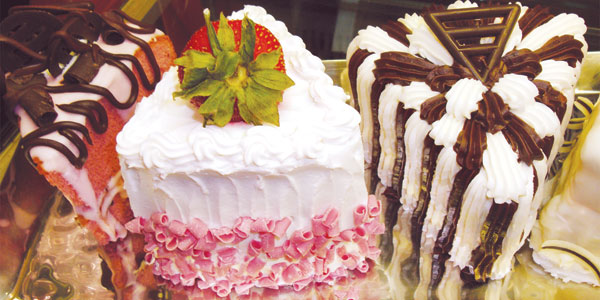 (Photo: The Show & Sell team frosted the sides of cake slices to keep them from getting dry, Anne Terrien of IDDBA said.)

Cake for Two — two slices, sometimes different varieties packed together — is a new intro at one chain, and another has expanded space in a refrigerated grab-and-go case for a longtime customer favorite: single cake slices in a clamshell package. Another is ready to launch a two-count pack of muffins in several varieties.

All of these things offer convenience for the consumer who wants to pick up something quick, is looking to limit his spending and limit his intake of calories, wants to try something new, but doesn’t want leftovers, or all of the above.

The retailer benefits, too.

Single-serve items drive sales up, and boost margins at the same time, they told SN.

Hodges said even with additional packaging and labor costs, he still comes out way ahead with single slices.

“Not only that, but return sales are quicker,” he said. “People’s shopping patterns are changing. They come in almost daily. Their perception is that everything is fresher if they do that, and that’s certainly true in our bakery.”

Hodges said the retail price of a cake slice can bring down the sticker shock a customer might feel when he sees the retail on a whole cake. He also contends that people don’t stop buying sweets during tough times, and they’re apt to figure they can afford $2 for a piece of cake.

Hodges is also looking to add more less-pricey bakery items. Next up, he said, is a two-pack of muffins. “And for the holidays, a small, 4-inch cheesecake, and a small, loaf-type fruitcake.”

While Nyla Stromberg, cake department manager at Marketplace Food & Drug, Minot, N.D., is just coming off her busiest season. Working to fill graduation cake orders, she’s also paying a lot of attention to smaller items. She said she has price points in mind, but also the convenience of a single or double serving, easily portable and easily consumed.

When her team has time, Stromberg sets up a line of “cake pops,” cake balls on a stick, often decorated whimsically.

But more recently, since the town of Minot is booming, with the discovery of oil in North Dakota bringing an influx of oil-rig workers, Marketplace is super busy in all its departments, including the cake department.

Even with a constant, hectic pace, Stromberg has stayed on top of the single-slice of cake trend. Right now, she’s promoting Cake for Two — two slices, 2 by 3.5 inches, packed in a clamshell. The retail: $2.99.

“We sell a lot of those and also our 5-inch, double-layer novelty cakes for $10.99,” Stromberg said.

“We have a huge variety of sizes and price points, and our cake sales this year are better than they’ve ever been.”

Another retailer, John Chickery, bakery director at Riesbeck’s Food Markets, St. Clairsville, Ohio, turned the spotlight on individually packaged cakes squares, cut and iced from half sheets. ‘We’ve been offering cake squares for a long time, but I just noticed a while back that those were going so fast I thought we should do more with them.”

So in January, Riesbeck’s dedicated about 10% more space in its refrigerated grab-and-go case for the cake squares and began cross-merchandising them in deli. It worked.

“Sales of the individual cake squares, at $1.69 each, have risen 15% since the first of the year,” Chickery said. He, like Hodges at Piggly Wiggly Carolina, said the bakery usually doesn’t suffer much in a bad economy if the mix and price points are right.

Chickery said his sales have grown each year right through the recession. Now sales are up 8.59% year-to-date.

Next on Chickery’s agenda is a six-count pack of cake doughnut holes in a dome-topped, tamper-proof container, to retail for $1.49. He had already changed a 24-count bag of doughnut holes to a 20-count in a large clamshell, with at price slash of 40 cents.

That move too, was successful, but Chickery is still intent on offering more smaller-count items for the customer’s convenience.

While snacking has become a trend, the quest for fresh has accelerated and that gives the in-store bakery an edge on the grocery aisle’s snack items, an industry source noted.

David Wright, senior associate at The Hartman Group, Bellevue, Wash., pointed out that “snack” implies something small, and he cited statistics that affirm retailers’ decisions to add more single-serve items.

A full 44% of adult eating happens alone, and snacks account for 48% of all eating occasions, according to the 2012 Hartman Group Compass Occasions data. And the last U.S. Census shows 28% of U.S. households are single-person households.

All industry sources SN talked to agree that the trend for everything in smaller portions is here to stay because current lifestyles demand it. Add to that the dim economy that has people looking for a bargain. Also, with everyone from Mom to Michelle Obama urging people to eat healthier, they’re getting cautious about buying sweet indulgences. They might want to try a new variety, but don’t want a whole cake, Robert Breault, bakery director, Pennington Quality Market, Pennington, N.J., told SN.

“In the last six or seven months, we’ve added a lot of individual pieces of cake. We have wedge-shaped containers that look great,” Breault said.

“People love to eat dessert, but why buy a whole cake if there aren’t enough people to eat it. I think smaller portions are great.”

“With consumers keeping close track of how they spend their dollars and calories, it’s easy to see why single-serve or smaller portions are gaining ground,” Christison said.

“From a single slice to a cupcake to a half cake or mini cake, it’s all about ‘right-sizing’ for today’s appetite.”

Demographics can be a factor, too, which underscores the need for retailers to know their customers.

At Hank’s Thriftway bakery in Hillsboro, Ore., Patty Smith, one of the company’s bakery managers, said, “We don’t do a lot of individual packaging. We have single slices, even jelly roll slices — and lots of doughnuts — but that’s because people eat in here.”

The bakery has seating for 12, and business booms between 6 and 8 a.m.

“Our fried doughnuts and apple fritters are the best sellers, but when people buy cake here, it’s usually a big one, at least a quarter or half sheet,” Smith said.

“We’re in a rural area. People have big gatherings, celebrating, weddings, anniversaries, and other things. This is the kind of town where everybody knows everybody else … gatherings are big.”

Large cakes may be popular in Hillsboro, but not so in a lot of other places.

“They’re an expectation,” he said.