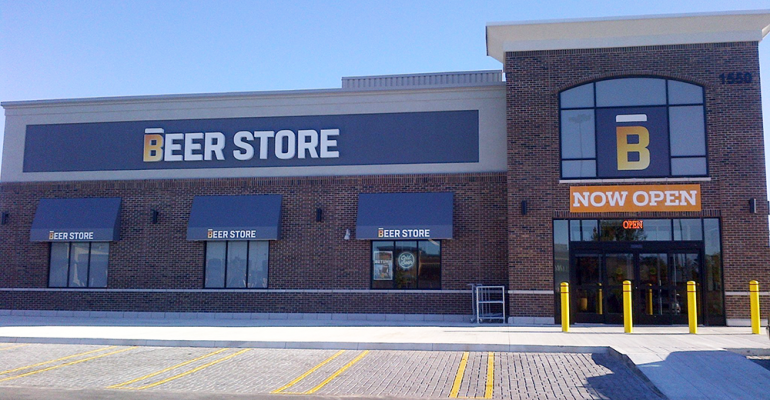 The Ontario government is angling to break what it calls a “near monopoly” on beer retail sales in the province by enabling beer to be sold at more stores.

Minister of Finance Vic Fedeli has introduced legislation to terminate the contract of The Beer Store, a brewer-owned wholesaler/seller that until several years ago was Ontario’s only retailer sanctioned to sell beer for off-site consumption.

In 2015, Ontario signed a 10-year pact with The Beer Store (Brewers Retail Inc.) and its owners — Molson (Molson Coors Brewing), Labatt (Anheuser-Busch InBev) and Sleeman Breweries (Sapporo) — that extended beer sales to grocery stores but not to convenience stores. Called the Master Framework Agreement, the contract gave The Beer Store exclusive rights to sell 12- and 24-packs at retail and to sell beer to licensed bars and restaurants. The number of new retailers, permitted to sell no more than six-packs, was limited to 450 outlets until 2025.

The Beer Store operates 450 retail outlets and is owned by 33 brewers, primarily Molson (51%), Labatt (45%) and Sleeman (4%). Currently, 364 grocery stores are authorized to sell beer in the province, which they procure from the Liquor Control Board of Ontario (LCBO). Stores selling beer in Ontario include banners from Loblaw Cos., Sobeys Inc. and Metro Inc. as well as grocery retailers such as Longo’s and Walmart, among others.

According to Fedeli, the Ontario’s Bringing Choice and Fairness to the People Act (Bill 115), introduced May 27, would expand beer sales to corner stores (i.e., convenience stores), big-box retailers and more grocery stores and lower prices by increasing competition.

"The unfair agreement with The Beer Store puts the interests of three large global brewers ahead of Ontario consumers, taxpayers and small businesses. It's a bad deal for people in Ontario who want more choice and convenience, and it's deeply unfair to businesses who want to compete in this sector,” Fedeli said in a statement last week announcing the legislation.

The Beer Store accounts for almost 70% of volume beer sales in Ontario, which totaled $3.3 billion in beer sales for 2017-18, according to an alcoholic beverage market review conducted for the province by special adviser Ken Hughes.

By channel, The Beer Store and 224 brewery on-site retail stores generate 68% of beer sales in Ontario, followed by 29% from 663 LCBO stores and 3% from grocery stores, the report said. LCBO outlets include 209 LCBO Agency stores, which typically are part of a general store or grocery store and buy beer wholesale from LCBO and The Beer Store. 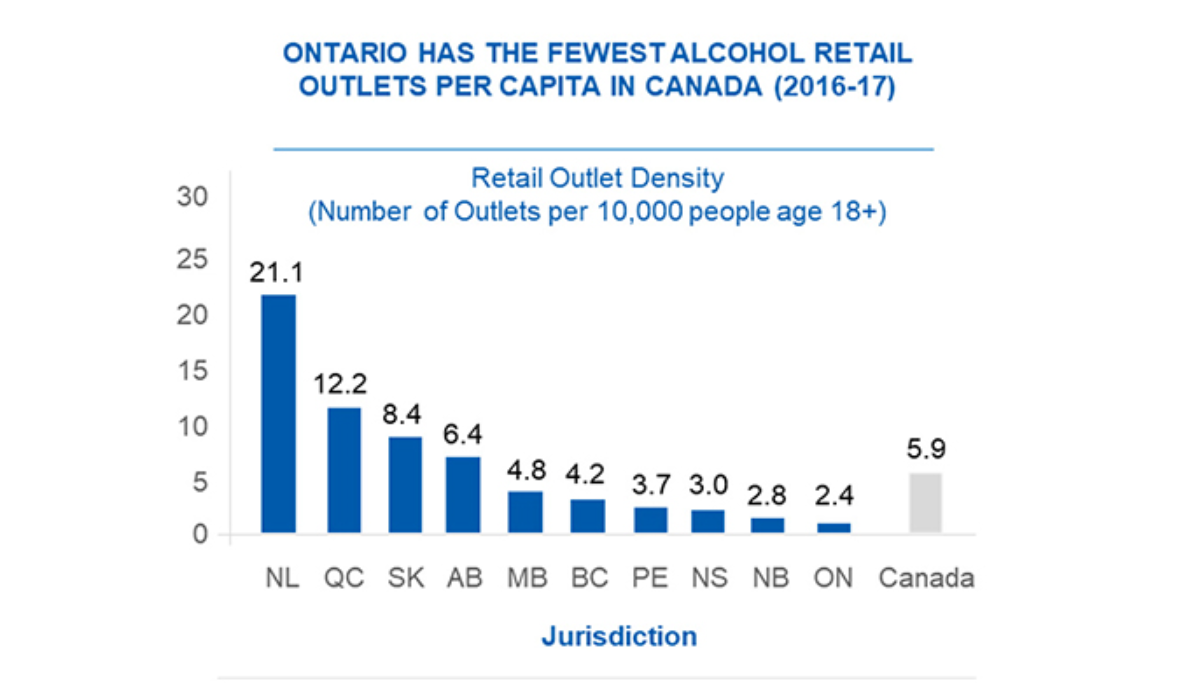 "Many of the current challenges with alcohol retail in Ontario stem from the 2015 Master Framework Agreement signed by the previous government, The Beer Store and the three large global brewers who own it," Hughes stated. "Because of it, many small businesses are shut out of alcohol retail and the economic benefits that could come from an expanded market."

Craft beer sales represent less than 2% of sales at The Beer Store, compared with more than 10% at LCBO outlets and over 15% at grocery stores, according to Hughes’ review. His report said changes instituted by The Beer Store to help craft brewers “have not resulted in a comparative increase in market share” and that the basic retail format of most Beer Store locations “provides limited opportunities for craft brewers to market their product.”

"We're ready to provide new retailing space for Ontario craft brewers and wineries to showcase their products in their communities, while continuing to be responsible retailers,” said Dave Bryans, CEO of the Ontario Convenience Stores Association, in announcing OCSA’s support of Fedeli’s legislation.

When the Ontario government introduced Bill 115, Mississauga-based The Beer Store said it will challenge the measure for its proposal to cancel the Master Framework Agreement. The privately held company also contends that its model keeps beer prices low for Canadians by enabling them to buy in volume from a wide selection, encompassing more than 860 beer brands. Customers also can purchase beer online or via The Beer Store mobile app for pickup at a store or home delivery.

"We are currently reviewing the government's announcement related to the Master Framework Agreement with The Beer Store and are pursuing our legal options. The government cannot extinguish our right to damages as outlined in the Master Framework Agreement. It is critical to understand that The Beer Store has, in good faith, based on a legally negotiated 10-year operating agreement with the province of Ontario, invested more than $100 million to modernize its stores and to continue to upgrade the consumer experience,” The Beer Store President Ted Moroz said in a statement. “We have today sent a legal letter to the government and will fight this legislation vigorously through the courts.” 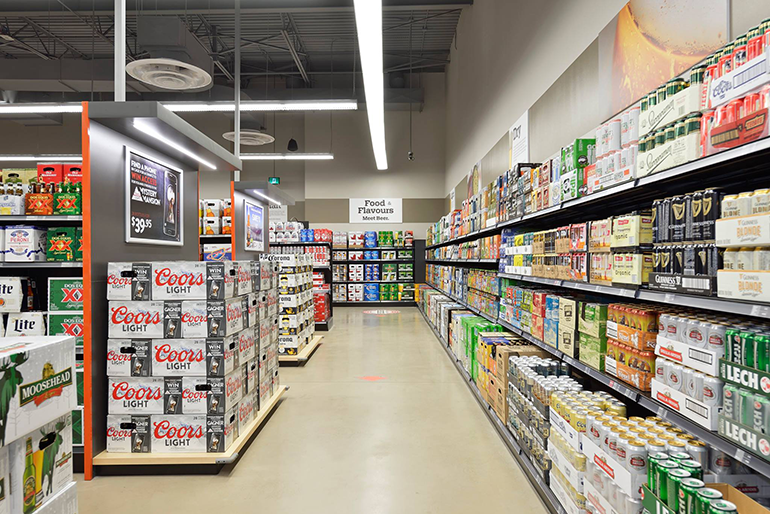 The Beer Store offers more than 860 brands of beer.

According to the United Food and Commercial Workers (UFCW) Local 12R24, which represents The Beer Store employees, Ontario’s bill to nix the contract would cost 7,000 jobs and billions in taxpayer dollars.

“We have a government that is now introducing legislation for the sole purpose of destroying the livelihood of over 7,000 Beer Store employees in communities large and small across Ontario and wasting taxpayers’ money,” commented John Nock, president of UFCW Local 12R24.

The Master Framework Agreement “modernized the beer retail model” by expanding beer sales to grocery stores in addition to The Beer Store to “maintain Ontario’s pretax beer prices as among the lowest in Canada,” Nock explained. He noted that the pact was intended to establish a stable business environment for brewers, retailers and workers for 10 years.

“[Ontario Premier] Doug Ford promised no one would lose their jobs as a result of his policies. And now he’s cancelling contracts, creating chaos and kicking good jobs to the curb,” he added. “We will fight this government and this premier to keep our jobs and to save the taxpayers the billions Ford is willing to pay to put beer in corner stores.”

A study by the Retail Council of Canada (RCC), released at the end of April, said polls have shown that 73% of Ontarians support the sale of 12- and 24-packs in grocery stores, and 68% of Ontarians support the sale of alcohol at all grocery stores in the province. RCC’s “Alcohol in Ontario: Choice & Convenience” report also found that, after removing taxes, 24-pack beer prices in Ontario are 8.3% more expensive than identical products in Quebec, the only province legalizing grocery and corner store sales of beer and wine.

RCC noted that Ontario is well behind other provinces in retail availability of alcohol. Based on Statistics Canada data cited in the council’s report, Ontario has 2.4 retail outlets per 10,000 people versus the national average of 5.9 outlets. To attain the national average, Ontario would need to add 4,028 retail locations selling alcohol.

What’s more, RCC’s report said allowing more retailers to sell beer and alcohol in Ontario would create 9,100 new jobs and lift the province’s gross domestic product by a $3.5 billion a year. The dollar total is based on a study of the British Columbia alcoholic beverage market, which determined that licensing a grocery store to sell alcohol would raise its sales by an estimated $880,000 and create 2.3 jobs.

"Ontario is dead last in Canada when it comes to alcohol choice and convenience," Karl Littler, RCC senior vice president of government relations, said in a statement on the release of the Hughes report. "Ontario currently has the lowest density of retail outlets selling beer, wine, cider and spirits in the country. Today's report, if fully implemented, would see increased choice and convenience for the consumer, more jobs for industry and lower prices."

An analysis done for The Beer Store by Ankura Consulting Group blasted the findings of the RCC and Hughes reports.

“The RCC report is flawed, as it is based on cherry-picked data and incorrect analyses that have no predictive value about prices, jobs or GDP growth in Ontario. The Hughes report relies heavily on the RCC report and, as such, it would be incorrect to place any weight on its obviously flawed conclusions relating to jobs and economic impact,” Ankura Senior Managing Director Debra Aron and Managing Director Justin Lenzo wrote in a letter to Charlie Angelakos, chairman of The Beer Store.

“We conducted a thorough analysis of beer pricing in Ontario, Alberta and Quebec. Contrary to the reports, it is clear, based on robust data and accepted statistical methodology, that Ontario has the lowest beer prices, despite the highest taxes, in these three provinces,” Aron and Lenzo noted.

Working toward an accord

At the end of June, the Ontario Chamber of Commerce plans to release a report on regulatory and policy issues facing alcoholic beverages, including beer, wine, cider and spirits. The chamber said its review will include input from industry stakeholders.

“Modernizing the sale of beverage alcohol is an important objective, and we support a more competitive marketplace. However, breaking a legitimate contract is a short-sighted approach,” Rocco Rossi, president and CEO of the Ontario Chamber of Commerce, said in a May 29 letter to Finance Minister Fedeli. “Before the government proceeds with the MFA termination, the OCC would like to see a comprehensive and evidence-based plan on the future of alcohol sales in the province. Our members believe that the government of Ontario must take a strategic — rather than piecemeal — approach to alcohol policy, one which aims to serve both the industry and consumers fairly.”

The Hughes report recommends that Ontario’s government work with The Beer Store and its owners to authorize more alcohol retail outlets under the Master Framework Agreement and, if those negotiations fail, to “consider other available options within its powers” to expand retail sales. In addition, the report said the authorization of new retailers and alcoholic beverage products should occur in a “phased approach,” and the government should promote price competition between retailers.

"We support today's report by Ken Hughes, which if implemented, would see the market deregulated,” RCC’s Littler said. “Any decision that offers further deregulation on alcohol is a win for consumers and a win for Ontario's economy.”