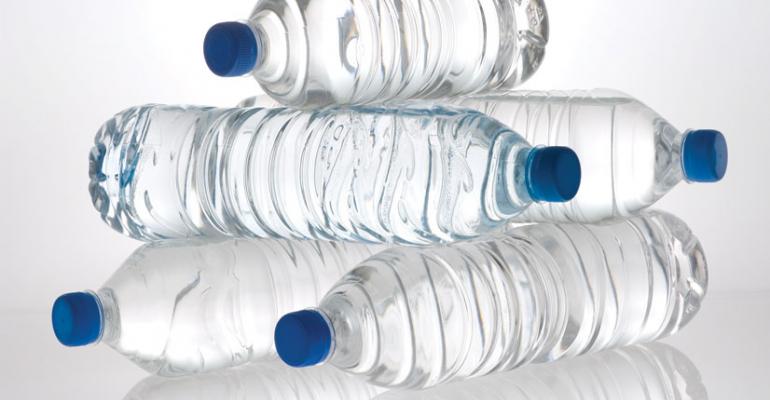 With bottled water sales on the rise, retailers are making more room for single-serve packs

For the grand prize winner of its first “Get On The Shelf” contest last year, Wal-Mart Stores named HumanKind Water, which uses 100% of its profits to fund clean water projects around the world. The brand was made available online and at select locations around the country.

“Get On The Shelf has brought out the best in American ingenuity and creativity with products that are clever, fun and useful,” said Joel Anderson, president and CEO of Walmart.com, of the three winners at the time.

HumanKind’s noble goal may have appealed to the retailer’s customers, who made the final decision, but the fact that the winning product was a bottled water surely appealed to Wal-Mart. The category is a mainstay of beverage aisle profitability, and experts say nothing is likely to change anytime soon.

The most recent annual snapshot from the International Bottled Water Association found that overall 2012 U.S. consumption grew faster than any other beverage, increasing by 6.2%, while sales grew 6.7%, to a tidal wave reaching $11.8 billion. The average consumer gulped nearly 31 gallons of bottled water last year, up 5.3 gallons from 2011. Only carbonated soft drinks are more popular, with per capita consumption at just over 42 gallons.

“Bottled water is the second-largest beverage category at this point in terms of consumption,” said Gary

Hemphill, managing director of research, at Beverage Marketing Corp., New York, which conducted the IBWA survey. “And for a category this size to see this kind of accelerated growth is fairly impressive.”

The key segment for supermarkets is the retail PET subcategory, which makes up two-thirds of total bottled water volume. It includes single-serve 16.9-ounce/half-liter bottles, 8-ounce minis and 11-ounce, kid-friendly “pods,” all of which are usually packed in multiples. While the larger category can also include gallon jugs, 2.5-gallon refrigerator dispensers, pricier imports and sparkling varieties, the breadth and reach of retail PET dictates the level of success.

“In looking at the multi-pack mainstream category, we carry five brands but do have one additional ‘packer label’ brand for price and image only, due to the lower price points being seen at competitors,” noted Mark Stewart, Center Store business manager at United Supermarkets, Lubbock, Texas. “We try to place all of our beverage items such as water, CSDs and isotonics together, but with the growth of water the past few years it dominates the aisle it sits on.”

United typically carries about 125 SKUs of mainstream water, including its own private label, Kristal. Select stores with larger versions of the retailer’s Living Well natural/organic section might carry closer to 300 SKUs due to the inclusion of more specialty waters.

Like all conventional supermarket operators, United promotes bottled water weekly, primarily the 24-pack, half-liter size. While one brand is kept on the retailer’s display program all the time, another is featured in a pallet drop on the sales floor.

Pallets may not be the most attractive merchandising scheme supermarkets have employed for a product, but they’re effective. These bulk set-ups emphasizing low prices are capable of moving a flood of product out the door. The impact of this strategy can be measured by the number of cardboard trays and torn pieces of shrink wrap left by shoppers at the end of the day.

Stacked and Priced to Move

The ShopRite chain of stores supplied by Wakefern Food Corp., Keasbey, N.J., utilizes platform displays in areas of high traffic near its popular delis. Pallets are dropped under a “Featured Items of the Week” sign that includes several other products on promotion. Bottled water is also stacked and priced to move at C&K Market, a chain of 62 stores based in Brookings, Ore.

“We pretty much do it like everyone else,” said Terry Spencer, C&K’s vice president of merchandising and marketing. “We put the pallets out on the floor, and cut the shrink wrap.”

C&K, which operates  supermarkets under the C&K Market, Ray’s Food Place and Shop Smart banners, spiced things up last year when it deployed a unique secondary bottled water display in the lobby area of stores using its  Super Chill private label as the foundation. A summertime lock down promotion offers 24-packs of Super Chill water and 12-packs of Super Chill CSDs at $3. But C&K takes the merchandising one step further.

“A lot of the larger stores are taking a 24-pack and actually staging it in the shopping carts, so we’ll have three or four carts up front that already have the 24-pack of water in them to help the customers,” said Spencer.

Even though the chain sells upwards of 25  water brands throughout its stores, Super Chill is a sales leader, in large part due to the aggressive pricing and suggestive merchandising. Such tactics have helped boost single-serve sales to the point where they represent up to 25% of C&K’s overall single-serve beverage volume, “and that has been steadily growing over the last five years,” Spencer added.

Pricing and convenience are practical reasons behind the growth of bottled water consumption, but not the only ones: Increased consumption can also be traced to the efforts of public health advocates. BMC’s Hemphill found that health concerns are a significant factor in consumers choosing more bottled water over CSDs and similar sugary refreshments.

“Great positioning as a healthy beverage, as well as aggressive pricing, are the two keys that have been driving the category,” he said. “In general, products with greater health attributes and functionality are outperforming those that don’t offer those attributes.”

“Information on water is discussed when determining fluid requirements during consultations as well as during in-store events,” she said. “A common one this time of year is the hydration station, where the dietitians highlight the importance of meeting fluid requirements in hot weather. The stations feature water along with other low-calorie and calorie-free beverages such as unsweetened tea, tea bags, low fat milk, carbonated water flavored with a splash of 100% fruit juice, or even fruits and vegetables that are predominantly made of H2O, such as watermelon.”

“Not only is it a calorie-free beverage that the body cannot survive without, it also helps to balance blood sugar and blood pressure, helps things move through the liver and kidneys better, and assists the digestive system as well,” she said. “We frequently tell guests to eat more fiber, but that also means they must drink more water at the same time.”

Campaigns like “Take Back the Tap,” sponsored by the non-profit Food and Water Watch, have tried to get consumers to kick the bottled water habit, but the water industry has helped alleviate environmental concerns by introducing bio-degradable, plant-based plastic bottles and removing excess material from containers themselves.

“The category as a whole has been very aggressive in lightweighting the packaging and the closures,” said Gary Hemphill, managing director of research at Beverage Marketing Corp., New York. “If you drink a single-serve bottle of water today, they’re fairly easily collapsible, there’s so much plastic removed.”

Combined with improved efficiency of the production line, greener bottles mean that companies are now able to deliver water to the retail shelf in a more cost-effective way — “and that’s allowed for more flexibility in pricing,” Hemphill added. 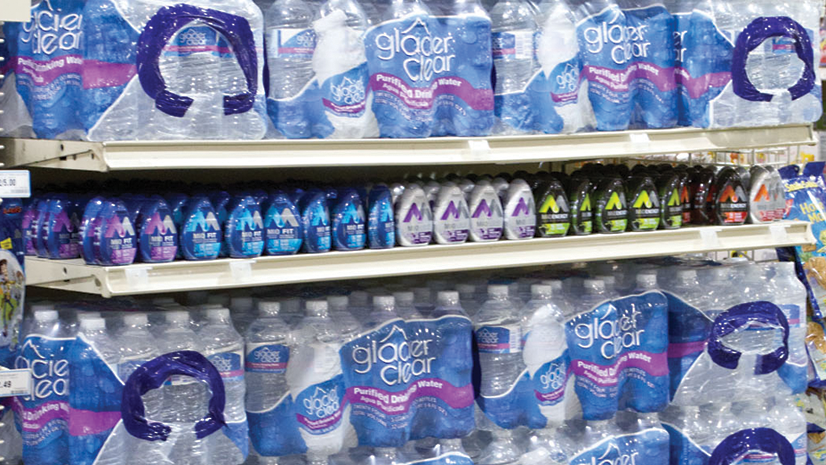 A Water for Every Taste

If anything is dropping in bottled water sales, it’s likely a flavoring agent like Mio, Dasani Drops or new Kool-Aid Liquids. The add-ins have opened up a whole new growth area that’s sure to fuel additional water demand. Bottled water has become a blank canvas that can be customized by flavor, function or nutrient.

Like many supermarkets, C&K Market, Brookings, Ore., merchandises most of the liquid additives in the juice aisle, though the water section gets cross-promoted, too.

“We’ve put some racks and little shelf fixtures up that display products like Mio or Dasani Drops in front of the water,” said Terry Spencer, vice president of merchandising and marketing, for the 62-store chain.

Melanie Dwornik, retail dietitian supervisor at Wakefern/ShopRite, Keasbey, N.J., said that choosing a flavoring product is a personal choice. It helps that many are low-calorie or calorie-free.

“For consumers who prefer to add flavor or variety to their hydration regimen, flavoring agents may be an option,” she said.