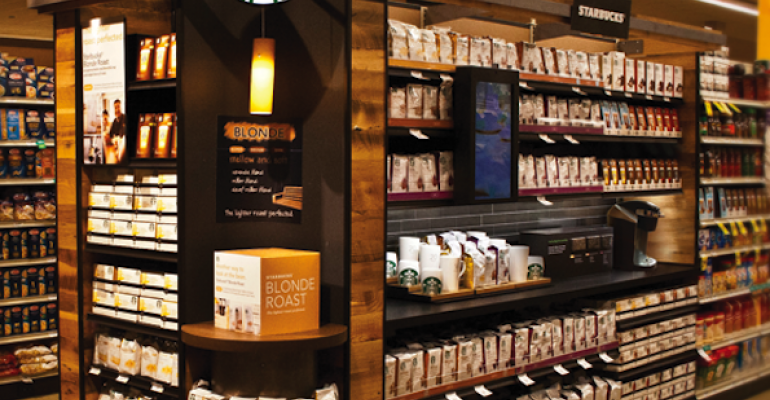 PLEASANTON, Calif. — Starbucks has perked up the Center Store of 23 Safeway locations.

The size of the new fixture varies depending on store layout, but typically runs about 9 feet long. Safeway declined to comment.

What makes the fixture unique is that it has the look of a Starbuck’s cafe, complete with the mermaid logo, reclaimed wood accents and brand messaging. Starbucks will even bring in barista ambassadors to conduct coffee brewing demonstrations.

“It has the ambiance and visual appeal of our coffee houses,” Joe Manning, Starbucks’ director of channel development, told SN.

“We are making coffee-buying an engaging experience,” Manning said.

The Signature Aisle, also in place in one Kroger unit, is slated to roll out to 100 stores within the next year. Safeway and other retailers are part of the expanded rollout. Starbucks declined to name the other retailers.

“Our goal is to create a destination,” said Manning. “We want to elevate the coffee-shopping experience.”

At a time when retailers are scaling back on Center Store in favor of the heavier-shopped perimeter, the display adds excitement to what previously was a standard dry grocery section, said Manning.

“We want to create the same shopability of the perimeter in Center Store,” he said.

The displays feature strategically placed products. For instance, tapping into the popularity of the single-cup market, Starbucks merchandises K-Cup single-cup packs adjacent to Via instant coffee.

“Putting them together enables shoppers to get single-cup offerings in one place,” he said.

The end of the Signature Aisle features product-related messaging that changes seasonally.

“We will deliver different messages so that it stays fresh,” said Manning.

The current featured product is the company’s new Blonde Roast, a lighter-bodied coffee. In June, the endcap will highlight the introduction of the Starbucks Card Rewards program in food stores, which were previously only available in Starbucks cafes.