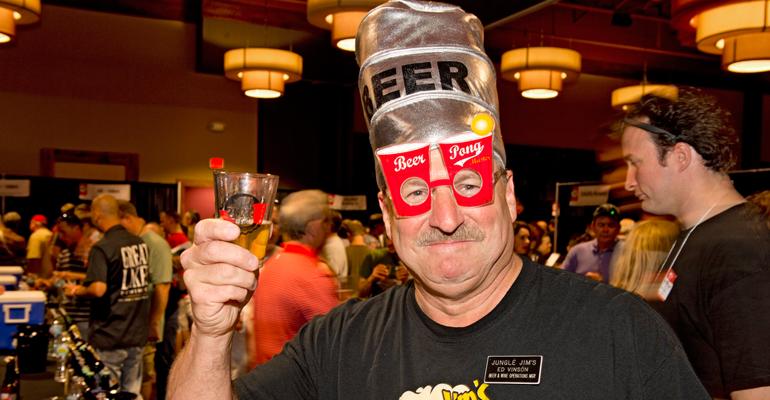 Lucky’s Markets offers shoppers $2 glasses of beer to sip while they peruse the aisles.

A Whole Foods store in Houston that has its own microbrewery promotes it with a keg-equipped “beer bike” offering quaffs to thirsty customers.

Lowes Foods offers Pint Nights every Friday to attract crowds to sample the latest creations of local brewers in its in-store Beer Dens.

Perhaps no product in the supermarket says “fun” more than a freshly poured glass of cold beer, and supermarkets seeking to differentiate themselves by creating a more rewarding shopping experience are turning on the taps.

Hartline launched beer and wine tastings at Kingma’s soon after acquiring the store in 2014, and has transformed the store into a destination for craft and local beers in particular.

“I don’t think there’s a Michigan beer that we don’t carry,” he said.

Kingma’s offers a selection of about 400 beers along a 28-foot “wall of beer,” and hosts beer and wine tastings every Friday and Saturday night. The events sometimes take the form of themed nights, such as a recent retro beer tasting featuring brands such as Stroh’s, Old Style, Pabst Blue Ribbon and Schlitz. The event was made even more exciting for consumers with the addition of giveaways from the brewers, Hartline explained.

Kingma’s Market also recently served as the exclusive launch venue for the first-ever retail availability of beers from Elk Brewing, a local brewer in the Grand Rapids area.

“We were the first retailer in the nation — actually in the universe — to receive Elk Brewing beer, and we sampled it on the very first day it hit the market,” Hartline said, adding that the event was highly successful in driving sales of the product.

He said he plans to continue offering in-store beer tastings as he expands Kingma’s to a second location later this year in Ada, Mich., an affluent suburb of Grand Rapids. The thirst for craft beer isn’t necessarily defined by income, however, he added.

“A lot of young Millennials might not have a car, and they might have a modest 1,200-square-foot home, but craft beer is important to them, and eating organic is important to them,” Hartline said. “They will spend their disposable income on those areas because they want the experience.”

Although some reports indicated a slowdown in the rate of craft beer growth in 2016, it is still far outpacing overall beer sales growth in the U.S., and supermarkets are a leading venue, according to the Brewers Association, Boulder, Colo.

In 2015, craft beer captured $22.3 billion, or 12.2% of the overall $105.9 billion U.S. beer market. That represented an increase of 16% in dollar volume, the Brewers Association reported. The association has not yet released volume data for 2016.

Ryan Dee, creative director, Interactions Marketing, a division of Daymon Worldwide that provides in-store events and other marketing services, said beer and other adult-beverage sampling programs can help differentiate retailers from their competitors.

“It sets the supermarket up as the voice of authority,” he said. “They can say, ‘These are the new varieties and flavors that are going to hit the adult beverage space, and this is why you should try them, and why we believe in them so much.'”

The growth of the craft beer industry has dovetailed with an era of flavor experimentation among Millennials, helping propel the popularity of beer sampling events, said Dee.

“[Consumers] are always looking for the next new thing to try,” he said. Supermarkets also can leverage the “local” cachet that partnering with a regional brewer can confer, Dee explained.

“Just as we see the prevalence of locally grown produce, anytime you can source locally from the communities that you serve, it’s a point of differentiation for the retailer and hugely important to a lot of consumers, especially in the Millennial space,” he said.

Lowes Foods, based in Winston-Salem, N.C., is among the food retailers that have added taps and leveraged their beer offerings and local partnerships to create an engaging in-store experience for shoppers.

The chain works with local breweries to create unique, new brews that it offers in its stores through events it calls Collabeerations. In December, for example, Lowes partnered with a local brewer to create Swiggy Puddin’, which the retailer described as a malty, slight sweet base of Scotch ale with the flavor and aroma of freshly baked cinnamon rolls.

The chain has been partnering with local brewers for the past two years, said Charles Slezak, category manager for beer and wine.

“We are supporting local brewers in the Carolinas and bringing unique tastes to our guests,” he said.

Certain Lowes locations — the company declined to reveal how many — include a Beer Den with about eight to 10 taps where customers can taste beers and purchase growlers.

“We also welcome local vendors to join us at The Community Table, where the vendors themselves join us to share the stories behind their beers,” he said.

Lowes supports its in-store beer offerings with an extensive section dedicated to its Beer Dens on its website, including listings of what beers are available on tap at which locations, and through social media postings.

Jungle Jim’s International Market, the two-store operator with locations in Cincinnati and Fairfield, Ohio, was among the food retailers that embraced the craft beer boom early on.

The eclectic independent retailer keeps its beer selection front and center in the minds of consumers with its Pint Nights featuring a selection of draft beers every Friday at both locations. The Fairfield Jungle Jim’s recently upgraded its Tasting Bar and now features more than 30 beers on tap, and the Eastgate (Cincinnati) location has more than 40 taps.

While Jungle Jim’s conducts some themed Pint Nights — such as Ohio Valley beers — most Pint Nights feature offerings from local, regional or national breweries, according to Jared Bowers, social media and content coordinator for the retailer.

“We try to maintain a good mix, and do our best to have something new, unique or exclusive on tap to make each Pint Night worth standing in line for,” he said.

As is the case with an increasing number of supermarket beer-tasting events, Pint Nights have evolved into a social occasion for customers.

“Pint Nights are about the experience of sharing your favorite brewery, or trying a beer or two from a brewery you’ve never had something from, with friends and family,” said Bowers. “They’ve become a weekly tradition for a lot of people, so Friday nights feel more like a bar with a grocery store around than a grocery store with a bar inside.”

Local distributor or brewery representatives often stop by Jungle Jim’s for Pint Nights to discuss the beers on tap, share the tasting experience and help direct customers to the takeout offerings, he said.

“For our guided tastings, it’s all about making them entertaining and educational, offering great beers and making it a valuable experience,” said Bowers. “Given the depth and breadth of our selection and the knowledge and expertise we have between both locations, that’s essentially second nature for us.”

Jungle Jim’s also stages three major festivals dedicated to craft beer: the Barrel Aged Beer Bash, which is a celebration of the art of barrel aging beers, the Buckeye Beer Bash, which features craft beer from across Ohio, and its flagship beer event, Jungle Jim’s International Beer Festival, which is held every June and features more than 400 beers from 100 breweries from around the world. In some states, such as Michigan, in-store beer sampling only became legalized in recent years, and several retailers capitalized immediately, said Sharlan Douglas, a co-owner of Professional Pours, a third-party sampling service provider that has worked with Kroger Co. and other retailers in Michigan.

“Everyone jumped on the bandwagon as soon as this was possible,” she said.

The key to successful beer sampling programs is having knowledgeable, well-trained staff who can engage customers and interact with them around the products, she said.

“Our team members are very assertive about speaking to everyone who passes by,” Douglas said. “That has been the key to our success — speaking with customers, and bringing them in.”

She said Professional Pours obtains key selling points from brewers and then prepares training materials for its workers, who are independent contractors.

Dee, of Interactions Marketing, said that in an age of growing ecommerce threats, in-store beer events present a prime opportunity for retailers to bring customers into their stores and enhance their own brand image.

“Until Amazon starts delivering samples by drone, it’s one of the last ways that retailers can make their stores true destinations, and establish themselves as voices of authority when it comes to anything culinary,” he said.

Energy drinks up, alcohol down in mixed year for beverages
Aug 12, 2022