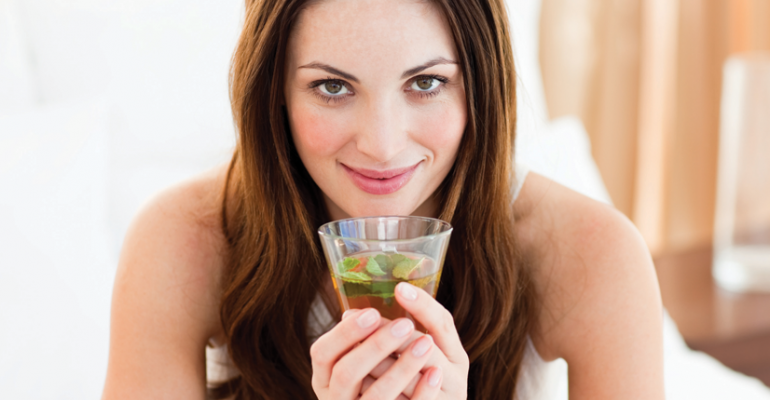 Steeped in health benefits and infused with new forms and flavors, the mature category is enjoying a resurgence of interest as younger consumers discover the nuances of tea.

“Tea is no longer that lonely middle-age woman sitting on her couch under her afghan,” said Tom Pirko, president of Bevmark Consulting, Buellton, Calif.

“Tea is rock and roll, it’s healthy, it’s getting a lot of good movement from the backlash against carbonated soft drinks, a lot of people are drinking it and there is a lot of competition.”

Just as Millennials host get-togethers centered on discoveries of wine and craft beers, 20-somethings are making an occasion of tea, observers told SN.

“Historically one of the big bets many tea companies made was to get younger kids interested in tea through the ready-to-drink format, and now you look at what Millennials are drinking and it’s ready-to-drink and loose-leaf tea; they’re even creating their own little tea ceremonies because they’ve bought tea pots and they’re trying different teas,” said Peter Goggi, executive vice president of The Tea Association of the USA. “We’ve achieved a new level of acceptance of tea by this generation. They’re not drinking their grandmother’s tea, but defining the category for themselves.”

“I see quite a few members of the younger generation coming over and trying tea,” he said. “I have a customer who gets together with his friends and everyone brings a different tea. It’s just like bringing beer or wine to a party but it gives you the chance to try something different.”

Goggi likewise equates tea discovery to the experimentation that happens with wine.

Indeed, the category shows so much promise that Starbucks last week debuted a first-of-its-kind teahouse on New York City’s Upper East Side. The Teavana Fine Teas + Tea Bar will both elevate the premium tea experience and make it more accessible, according to Starbucks, with a curated assortment of handcrafted tea beverages, premium loose- leaf teas, tea-inspired food offerings and tea merchandise. The tea bar’s “Wall of Tea” merchandises a range of loose-leaf tea and tea blends.

“The Teavana Tea Bar is a critical first step for us to meet the needs of tea drinkers everywhere by providing a place where tea enthusiasts and casual tea drinkers alike can learn about, enjoy and share in the tea experience,” said Cliff Burrows, Starbucks group president, Americas, Europe, Middle East and Africa, and Teavana, in a statement.

The launch comes a year after Starbucks acquired Teavana, whose “teaologists” engage and educate tea shop visitors about the ritual and enjoyment of tea.

Exotic blends like Youthberry White Tea, which combines soft tea with candied pineapple and mango pieces, and Fuji and Golden Delicious apples, are among its best sellers. Starbucks hopes to open at least 1,000 coffee-free teahouses in North America over the next five to 10 years, according to reports.

Pirko sees the move as transformative as it will lead to increased mainstream exposure to premium tea.

“Starbucks will take what it did with coffee and apply the same to tea,” he said.

There are even teas mixed with sweets like chocolate or vanilla and flowers. Chocolate Chai and Caramel Chai Tea are among the latest varieties from Bigelow Tea. And Lipton has a Vanilla Caramel Black Tea. There is also Slimful Chocolate Decadence Oolong Tea from Teavana. Billed as a guilt-free treat, it draws inspiration from warm Hawaiian chocolate cake and includes toasted coconut and pink rose petals.

“Tea has been rethought, so in some ways it’s a new beverage,” Pirko said.

Tea is so versatile, in fact, that it’s been named one of Boulder, Colo.-based Sterling-Rice Group’s new food trends for 2014.

“Tea: We’ve seen chefs use it in entrees, we’ve seen it used in desserts; really cool chocolate bars that we’ve seen lately are from the Tea Room and [Good] Societea, so we expect teas to have this proliferation beyond the tea cup,” Kazia Jankowski, associate culinary director, SRG, told SN.

Kelsey Schauer, a dietitian at Hy-Vee’s Albert Lea, Minn., store said that bold new teas make it easier for shoppers with a high concentration of triglycerides in their blood to get their levels under control.

Like all Hy-Vee dietitians, Schauer conducts biometric screenings and makes dietary recommendations based on the results.

“If someone has high triglyceride numbers I will ask them, ‘Are you drinking soda or a lot of sugary drinks,’ and most times people say, ‘Yes,’” noted Schauer.

Since many have grown accustomed to sweet tastes and are looking for some flavor, she recommends hot or cold tea sweetened with zero-calorie stevia.

“It’s hard for people to think about going straight from soda to water,” Schauer said. “If they want more of a juice taste I recommend herbal tea without caffeine in flavors like triple berry or chocolate.”

Herbal tea is a good choice, she says, since it’s decaffeinated and therefore offers hydration.

A similar recommendation was made last summer by the New York City Department of Health in a public service announcement that encouraged consumers to switch out heavily sweetened beverages for unsweetened tea. The message built on NYC Mayor Mike Bloomberg’s failed attempt to limit the sale of large soft drinks at establishments that receive a grade from the health department

In addition to health benefits, new forms are helping boost consumption, with over half of Americans drinking tea on any given day, according to The Tea Association of the USA.

Take tea pods that can be used with the single-cup brewing systems that helped boost coffee sales in grocery.

Goggi says that these systems are helping spur more frequent tea consumption throughout the day.

“It seems the impact on tea will be parallel to coffee,” he said. “We’re already seeing increased consumption of tea.”

There are also tea-based flavor enhancing drops that can be added to hot water to make tea.

Along with bagged and loose-leaf teas, products like these are desired by grocery buyers since they contribute high margins and take up relatively little space.

“Retailers will always jump on stuff that they think is going to help their margins, and tea has classically fallen into that space,” said Goggi.

But that’s not to say that  food retailers don’t need to be selective when curating expanding tea sets, warns Pirko.

“Don’t get lost by clogging your shelf with repetition of the same thing, but look for all the new things that are attracting interest, especially from young drinkers,” he said. “But give it more space since you’ll get a better return.