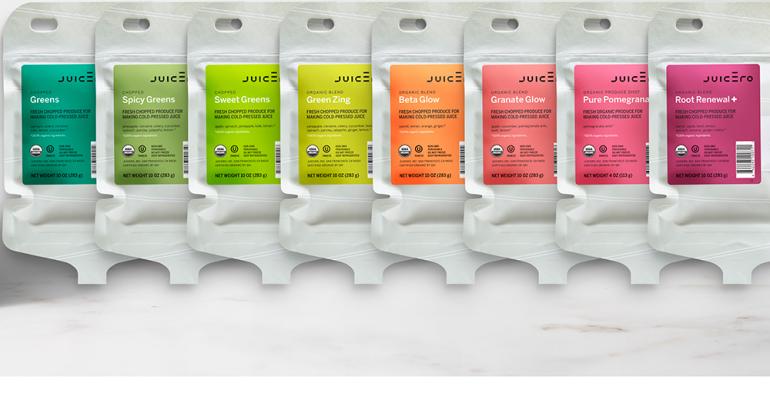 Merchandised from the kiosk are Juicero Produce Packs, which contain recently harvested, triple-washed and chopped, organic fruits and vegetables. Each of the stores will carry four to seven varieties with names like Sweet Greens, Beta Glow and Root Renewal+. “Juicero allows for a convenient, affordable cold-pressed juice that meets our high quality standards and we’re excited for our customers to have this new option for grabbing a juice on the go.”

Before interacting with the juice press, shoppers must either pay for their desired Produce Pack or a plastic cup at one of the store’s checkouts, said Jeff Dunn, CEO of Juicero.

“We’re trying a few different configurations, but this is so new that we’d like to figure out what the best sequence is,” he said, adding that in a few months, Juicero will test an app that will allow users to pay for their juice at the Juicero station.

The stores, some of which also offer full-service juice bars, are likewise testing the placement of the bars, which feature one to three juice presses in different areas throughout the store, according to Dunn who noted that some are positioned in the prepared food sections while others are placed close to the checkout. The stations are on wheels but require use of a power outlet as well as a Wi-Fi connection so that the juice press may read QR codes. Juicero markets its juice presses for home or commercial use, and offers home users delivery subscriptions of its Produce Packs, which retail for $5 to $8 each. The juice presses are currently sold for $399.

Among the most popular varieties are Beta Glow, containing carrot, lemon and ginger, and Root Renewal, with ginger, beet, carrot, apple and turmeric.

The company is able to keep prices low at Whole Foods due to scale, noted Dunn who said Juicero will sell juice presses at road show-type events at Whole Foods. Produce packs could also eventually be sold by the retailer for home consumption, he added.

Juicero has teamed with independent retailers on similar arrangements but this partnership marks the first with a chain retailer. Whole Foods is a great fit given its values and those of its shoppers, Dunn said.

“We’re very vegetable forward. Six of our SKUs are green drinks and we find that Juicero fits with people’s daily health routines,” said Dunn. “People want more nutrition in their diet and this is easy and accessible.”