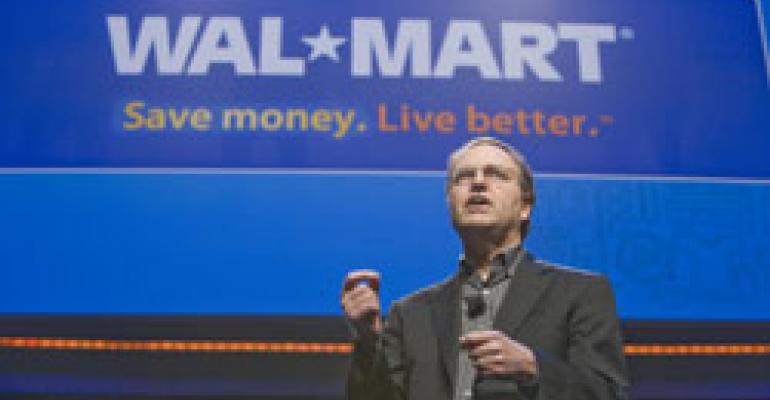 In a speech yesterday to more than 7,000 store managers, Wal-Mart CEO Lee Scott spoke of a future where solar panels and windmills might greet customers as they drive into a store parking lot. Considering where the world’s largest retailer stands right now, with more than 3,100 stores and a history of breakneck expansion, that’s wishful thinking — Scott channeling Don Quixote, if you will.

But Wal-Mart has been making tangible strides toward sustainability of late — like the recently launched packaging reduction program, among other things — and so the lofty statement mainly underscored this progress as well as similar plans for the future.

And those plans are substantial. Within the next three years, Scott said, the company will work to become 25% more energy efficient, primarily through leveraging its considerable influence with suppliers.

“We will only work with suppliers who maintain our standards throughout our relationship,” said Scott. “So we will make certification and compliance part of our supplier agreements, and ask suppliers to report to us regularly.”

In addition, the company wants to pass the energy saving habit on to these suppliers, as well as to customers. Scott said Wal-Mart will expect suppliers to reduce their energy use by 20%. The retailer would also like to “double the sale of products that help make homes more energy efficient,” according to Scott.

On the healthcare front, Wal-Mart plans to drive down prescription costs, saving more than $100 million for customers and employers. The retailer also plans to increase the number of electronic prescriptions it fills by 400%.

“E-prescribing will be more convenient for our customers,” said Scott. “But more importantly, it will be safer.”

Scott’s goals for Wal-Mart are admirable, and perhaps they should be. The company didn’t become number one by being environmentally sensitive and nice to neighbors. They changed a lot of communities and paved over a lot of trees. That was savvy business at one point, but now that’s changing as companies and consumers grow more environmentally conscious.

Considering all of this, you have to wonder: Could this be Wal-Mart’s way of saying sorry?