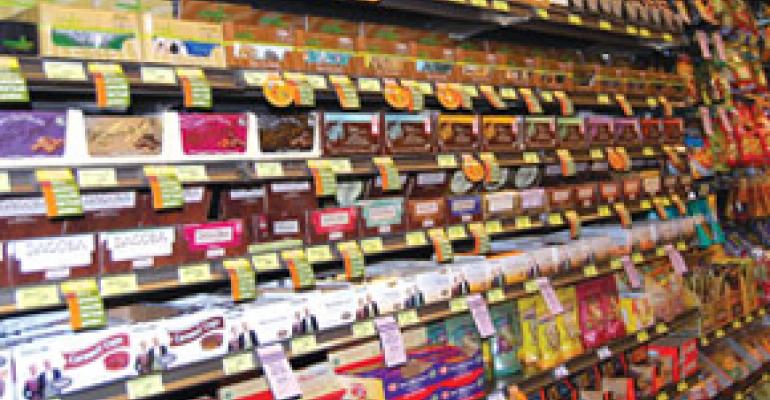 Everyone's looking for a bit of comfort in the middle of a recession, so retailers should be paying attention to their candy aisle. What's making consumers feel good are affordable luxuries. While shoppers may be forgoing their vacation to the Caribbean, they can afford a $2.50 bar of chocolate. People are having smaller indulgences, said James Field, candy category manager at Heinen's Fine Foods,

Everyone's looking for a bit of comfort in the middle of a recession, so retailers should be paying attention to their candy aisle.

What's making consumers feel good are affordable luxuries. While shoppers may be forgoing their vacation to the Caribbean, they can afford a $2.50 bar of chocolate.

“People are having smaller indulgences,” said James Field, candy category manager at Heinen's Fine Foods, Warrensville Heights, Ohio. Plus, he added, if you've eaten better chocolate, it's hard to go back to mainstream chocolate, and it may even be cheaper, since given the quality, less is more.

Area producers are benefiting from the trend.

“It seems that people are buying more snacks, since they're eating at home more.”

Much of what's offered in specialty grocery stores' candy aisles these days is either locally produced or Fair Trade Certified. Both of these have completely different value propositions, said Krista Faron, a senior analyst with Mintel International Group, Chicago.

“Fair Trade is about doing good for human welfare. There's no taste benefit or quality benefit, so it will only appeal to a certain subset of consumers who can pay a premium,” she said.

The motivators are quite different for locally produced candy, she said. “We see consumers gravitating toward these for taste and quality. The buyer might be more of a gourmand, but it's for a selfish reason: They're buying these candies because they taste good.”

However, every year sees more Fair Trade candy, according to Datamonitor's Product Launch Analytics. In 2008, 58 SKUs of Fair Trade candy were introduced in the U.S., more than double the 22 launched in 2007.

“I think it's because there's an increased awareness of quality chocolate and there's support for the smaller producers,” said gourmet food buyer Roger McElroy. And while customers may hope to support and connect with the smaller producers with their purchase, their main reason for buying local candy is less altruistic. “For the most part, it is the benefit of the higher-quality chocolate,” he said.

Fair Trade just isn't as well recognized, he added, although it is growing — slowly. Although locally produced candy makes up between one-fifth and one-quarter of the candy offered at Straub's, it takes the lion's share of candy sales at 60% of sales, while Fair Trade accounts for just 15%.

The difficulty with Fair Trade candy, said McElroy, is price. “Customers are not willing to pay if the gap [between prices] is too great. They usually won't buy Fair Trade candy if it's more than 15% more than other candy.”

To boost sales of Fair Trade and local candy, Straub's employees make use of their face time with customers.

“Our stores are pretty small, so we don't have much room for shelf information, and have no newsletter or circular,” said McElroy, so helpful information from the experts certainly works best.

In fact, Straub's employees even open packages of candy for customers to taste. “Most vendors give us a credit for packages we open,” said McElroy, “but customers often buy the leftovers because they feel guilty — even though we assure them they don't have to.”

PCC Natural Markets, Seattle, also does regular tastings. Each candy company tends to hold tastings two to three times a year, so there's an event at least once a month.

PCC has been carrying locally sourced candy for a long time, but customers are starting to notice Fair Trade, said deli merchandiser Jan Thompson. “People are getting more knowledgeable about chocolate and food in general,” she said. “They travel more and are just more interested in the world, especially if they've been to a certain place.”

Popular here is local candy from Theo Chocolate, Fran's Chocolates and Dilettante Chocolates; Fair Trade products are from Green & Black's, Sjaak's Organic Chocolates and Blanxart Chocolate. Most popular is dark chocolate, for the health benefits, said Thompson, “although single-origin chocolate gets a little esoteric, and customers don't really know 85% from 95%.”

Pacific Northwesterners also like some flavor in their chocolate — espresso, hazelnut and almonds, for example — and PCC sells more flavored than straight chocolate.

The top flavor additions at Straub's are almonds, walnuts, blueberries and pomegranate, said McElroy, and sales are split 50-50 between dark and milk chocolate. Dark chocolate fans tend to want the darkest their palate deems good, he added.

In the past year, dark chocolate has really taken off at Caputo's Fresh Markets. In fact, sales of dark chocolate have now surpassed milk and see 20% to 25% higher sales, according to Caputo.

There's also the form the chocolate comes in to consider. Two- to 3-ounce bars of local candy are the best sellers at Straub's, and boxed chocolates do well as reasonably priced gifts, said McElroy. A lot of boxed sales are for dinner parties, he added, but candy bars hold their own, since they're considerably cheaper.

Smaller bars sell best at PCC Natural Markets — anything from 1.6 ounces to 3.5 ounces. But small packets of bite-sized Sjaak's and Green and Black's sell well because consumers like portion control, said Thompson.

CVS unveils store-brand additions across the store
May 26, 2021