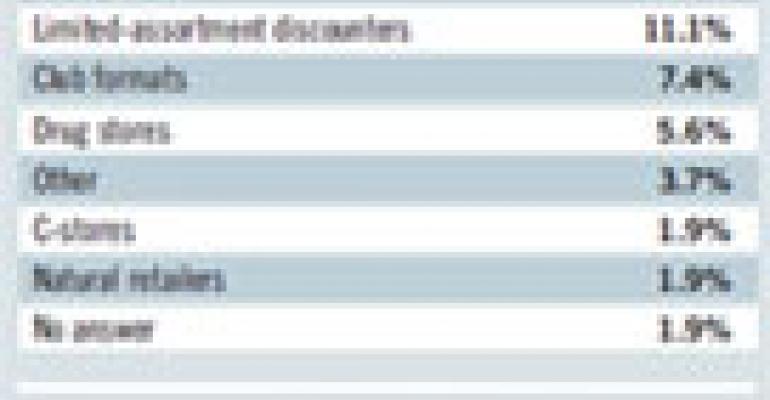 National brands have yet to recover share lost to private labels, according to the majority of food retailers (79.6%) and manufacturers (58.8%) polled by SN as part of its seventh annual Survey of Center Store Performance. Nearly one in five retailers (18.5%) and 41.2% of manufacturers indicated the opposite: that national brand marketers have indeed won back share. Other members of the industry also

National brands have yet to recover share lost to private labels, according to the majority of food retailers (79.6%) and manufacturers (58.8%) polled by SN as part of its seventh annual Survey of Center Store Performance. Nearly one in five retailers (18.5%) and 41.2% of manufacturers indicated the opposite: that national brand marketers have indeed won back share. Other members of the industry also weighed in.

“National-brand companies are looking for ways to improve their position,” observed a food wholesaler. “I see many using coupons to drive consumers back to their brand, but they're going to have to do more to change the tide back away from private label.”

Several manufacturer respondents cited the importance of branded products to consumers, using as example Wal-Mart's decision to bring back national-brand SKUs that were pared as part of its Project Impact rationalization effort. Cereal, carbonated soft drink, laundry detergent, pet treat and health and beauty categories were among those affected.

“Wal-Mart has acknowledged going too far in private branding and is just starting to give back space,” said one supplier.

At least one retailer respondent made a similar revision to its merchandising mix, indicating that heavily promoted national brands became so popular they led to the ouster of private labels.

“In some cases we have stopped carrying our store brand due to the name brand being overpowering,” said the retailer. “This is all mainly due to the national-brand companies pushing deals harder than I have seen in the past.”

Elsewhere, different plans are under way.

Looking to the future, 46.3% of retailers and 47.1% of manufacturers expect private labels will replace national brands in at least one of the categories in which they compete.

“National brands have done a poor job in advertising and service,” said one retailer. “They have cut back so much personnel over the years they've created a situation where they deserve to have their brands replaced.”

A manufacturer agreed that some counterparts are to blame, noting, “Stupid brand marketers let private label win the wars by overpricing their brands and fearing retailer retribution if they are also a private-label supplier.”

More than half of retailer (51.9%) and manufacturer (52.9) respondents do not expect store brands to replace national brands. But most have already experienced SKU rationalization involving a private-label/national-brand switch.

During the past year, national-brand items have been replaced by corporate brands in at least one of the categories in which they compete, according to 59.3% of retailers and 61.8% of manufacturers.

“Retailers have expanded the private-label choice with up to four tiers of private label — economy, national-brand equivalent, organics and specialty products,” said a retailer. “‘On the bubble brands’ have been eliminated.”

“If the consumer doesn't find the product that they want in their usual market, they will go where they can find it,” said a manufacturer. “It will be harder to gain that consumer's business back once they leave that particular store.”

“Wal-Mart is the biggest threat, but dollar stores and limited assortment are faster-growing threats,” observed a respondent.

When it comes to the most effective ways to fight these competitors for Center Store sales, one-third of retailers said that price is paramount. Nearly one-quarter (24.1%) said private label was most important, and the same number — 21.4% — chose value-added offerings such as clubs, loyalty cards, targeted offers, educational and nutrition programs.

“My small independent can never compete on price, but what we do is offer a friendly atmosphere, personal service and rewards for loyal customers,” said a retailer.

The exclusivity of corporate brands are also attracting shoppers.

Compared with this time last year, consumers are spending more on private labels, according to 83.3% of retailers. Just 3.7% said shoppers are spending less on store brands, while 13% indicated that they're spending the same.

To help maintain this momentum, the vast majority of retailers will add to or update their store-brand offerings during the next 12 months with most focusing on specialty products (40.7%), natural/organic (38.9%), healthy reformulation such as sodium reduction or an elimination of trans fats (37%), ethnic offerings (33.3%) and an additional tier of product (18.5%). Just 5.6% of retailers do not plan to update their corporate brands.

While they craft their promotional strategy, supermarkets are keeping a close watch on the cost-saving tactics employed by their shoppers.

The majority of retailers have at least experimented with social media to reach consumers with offers for Center Store products.

“We just started in April,” said a retailer respondent. “For an old guy, it is a slow process and huge learning curve with slow results.”

“We continue to grow in popularity,” said a retailer. “If it grows enough we may decrease our paper format ads and rely on these new ways to reach the customer more often.”

Digital and mobile coupons are also getting in front of shoppers before — and in some cases during — shopping trips.

Two-thirds (66.7%) of retailers are involved with Internet coupons that can be printed at home, while 18.5% are using digital coupon hubs that aggregate offers from multiple manufacturers and 13% provide a service that downloads Internet coupons to loyalty cards. The same number (13%) are linking digital coupons to loyalty cards, and 3.7% provide text message offers that must be presented to the cashier at checkout. One in five retailers (20.4%) are not involved with this type of couponing, many because of issues like counterfeiting and misuse.

“Somebody better get a handle on the amount of fraudulent coupons that are becoming available,” said a retailer.

Others will persevere with their efforts, as seven in 10 (70.4%) supermarkets plan to grow their use of digital/mobile coupons in the next 12 months; 24.1% said it will remain the same; and 1.9% said it will decrease.

“Promotion by cell phone and text will increasingly become the norm,” said a retailer.