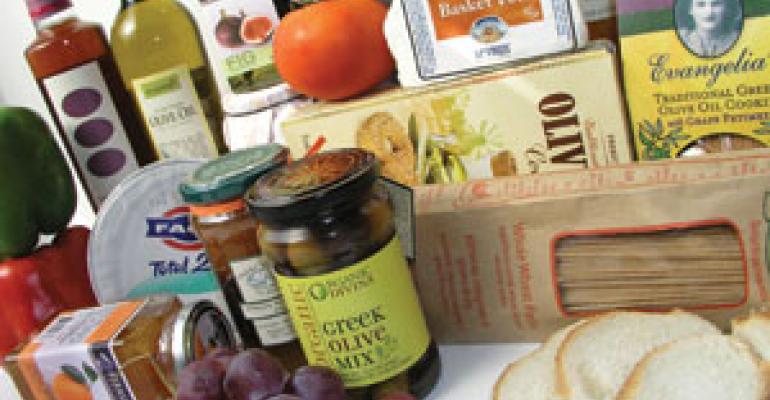 Grocers are appealing to the hearts of shoppers with romantic fare sourced from the indulgent Mediterranean region. The heart-healthy culinary traditions of Greece and southern Italy from around the 1950s when the rates of chronic disease there were discovered to be among the lowest in the world, and life expectancy among the highest are being revisited in international aisles throughout the U.S.

Grocers are appealing to the hearts of shoppers with romantic fare sourced from the indulgent Mediterranean region.

The heart-healthy culinary traditions of Greece and southern Italy from around the 1950s — when the rates of chronic disease there were discovered to be among the lowest in the world, and life expectancy among the highest — are being revisited in international aisles throughout the U.S.

The Mediterranean way of eating recommends making olive oil the primary source of dietary fat; food from plant sources; low to moderate consumption of fish and poultry weekly; and low to moderate amounts of cheese and yogurt daily. It also supports moderate wine consumption, according to Oldways Preservation Trust, the Boston-based nonprofit food-issues advocacy group that created the Mediterranean Diet Pyramid in 1993. Tips include substituting olive oil for butter; snacking on almonds instead of fat-free cookies; and substituting mayonnaise with an avocado spread.

“We started working on it around a time when the U.S. government said heart disease was a major problem for Americans, and it was almost frantically trying to figure out what to do,” said Dun Gifford, president and founder of Oldways. “Who doesn't like crusty breads, salads, fish and spaghetti? The science supporting it is so strong and, by gosh, it tastes wonderful, so it's not like putting some ketchup on sawdust.”

Indeed, the taste and health benefits of the fare are appealing to a host of retailers.

“Almost all of our [retail] accounts are asking for Mediterranean foods, because many of these items are all-natural and typically they contain little or no preservatives,” said Kimberly Wallace, category director of ethnic foods for specialty food distributor Tree of Life. “It also appeals to so many because it's exotic and romantic.” The category is achieving year-over-year growth in the 35% range, she noted, with items like hummus and tahini selling particularly well.

Bethesda, Md.-based Balducci's is so keen on foods from the Mediterranean region that it recently added more than 50 items imported from Greece to its shelves. Spoon sweets, olive oils, whole fruits preserved in sugar syrup and vinegars made from Corinthian grapes are among the new arrivals. About 80% of the Mediterranean foods that Balducci's carries are imported.

“It is typical for our merchants to find exceptional new products in their travels around the world — olive oils and cheeses especially,” said Pascal Jubault, vice president of buying and operations for Balducci's. “A monthlong celebration of Greek Mediterranean cuisine allows us the opportunity to showcase the rich heritage of Greece, and how its traditional flavors impact so many of our favorite dishes.”

Balducci's wrapped up its chainwide Greek food festival last week. The celebration included food tastings, expert chef cooking demonstrations and a chance to win a trip for two to Greece. In the past, it's hosted similar events highlighting Italian and Australian foods.

“From fragrant olive oils to hard and soft piquant cheeses, crisp salads and hearty meat dishes, there's so much to discover,” read an educational handout distributed during the event. It featured a guide to understanding fine Greek olive oils and cheeses and information that let shoppers know that because it's rich in monounsaturated fatty acids, olive oil works to raise HDL (good cholesterol) while lowering LDL (bad cholesterol).

Newly imported products and their health benefits were also outlined. Evangelia's Olive Oil Cookies in Orange Juice, Wine and Petimezi flavors, for instance, are low in fat and contain no cholesterol — and they work well with the vegan diet, since they're egg- and butter-free, the retailer imparted to shoppers. Recipes for Mille-feuilles, Garlic Bucatini, and Mushroom, Amfissa Olive and Sun-dried Tomato Pilaf were also distributed.

“For the festival we added a lot of products to our line, and due to strong sales we will continue to offer them,” noted Jennifer Barton, spokeswoman for Balducci's. “The customers are responding well and seem to love the products that we brought in. We'll definitely consider running a Greek promotion again in the future.”

Event-related coupons were distributed by mail to Balducci's rewards customers and prospective shoppers who live near its locations. Offers included $5 off any purchase of $20 or more; $2 off any $10 Greek product purchase; buy one Eleona Extra Virgin Olive Oil, get one free; and buy one Fage Total Yogurt and get the second one at half price. In-store demos took place from 11 a.m. to 2 p.m. on Saturdays from Sept. 29 through Oct. 20 and included moussaka made from ground lamb, eggplant and tomatoes; spinach and feta pie with greens inside a puff pastry shell; nutty Kefalotyri cheese; and peppery Lakonian and buttery Messinian olive oils.

“We've found that sales increase when customers are able to taste new products that they may not be familiar with,” noted Barton. “During our festivals it creates a fun atmosphere for customers to try new things in each department and spend the day sampling, tasting wine [in Maryland, Washington, D.C., and Virginia locations] or reviewing new products.”

“We recently asked ourselves, ‘Why aren't consumers paying attention to this elegant science?’” said Gifford. “We kept getting emails from people saying, ‘Can't you help us understand what belongs in the Mediterranean diet?’”

To be eligible for displaying the Med Mark, foods cannot have more than 8% of total calories from saturated fat, or more than 480 milligrams of sodium for individual foods and 4 grams of added sugar. Products also cannot contain any added trans fats. The symbol is currently featured on more than 60 products, including the Lucini brand of Italian olive oil and sauces that are sold at Costco Wholesale Corp., noted Nikki Heverling, Med Mark's program manager. Foods don't have to be ethnic or imported to qualify for the mark. A Campbell's vegetable soup, for instance, may be eligible.

“We're gaining a critical mass of product” interested in qualifying, said Gifford. “It's more work than we can deal with at the moment, but it's very satisfying.”

The introduction of the Med Mark follows Oldways' 2005 launch of the Whole Grains stamp, which now appears on about 1,400 products. Another part of Oldways, called The Latino Nutrition Coalition, distributes the Camino Mágico pamphlet, which helps Hispanic shoppers make more balanced dietary choices.

Oldways is also helping retailers guide shoppers toward these foods. It's putting the finishing touches on an eight-page consumer guide that can be developed into a full-scale retailer outreach program, noted Heverling. The pamphlet is to feature educational information about the components of the diet and the pyramid, as well as a grocery list. It will be distributed to retailers free on request.

“We find that consumers know it's a healthy way of eating, but they don't know what it is,” Heverling said. “The handout features information related to some healthy fats vs. not-so-healthy fats, and whole grains vs. refined, so we want to educate them about the main points. It's going to be a really useful guide.”

To help mark the 15th anniversary of the Mediterranean Diet Pyramid next year, Oldways plans to sponsor educational food and wine pairing events with grocers and wine shops.

Lubbock, Texas-based United Supermarkets has yet to promote the Mediterranean diet in particular, according to Suman Lawrence, living well business manager for the chain. However, the retailer's corporate dietitian encourages shoppers to balance their diets in much the same way.

“She talks about olive oils and avocados, whole grains, the rich colors of vegetables and cutting meat down into small quantities and making sure it isn't fried,” said Lawrence. “Texas is meat country, so I think it'll take a long time before people here get into this type of cooking and lifestyle.”

Still, United merchandises a range of Mediterranean foods for its trailblazers.

United's sets include six feet of olive oils; three feet of vinegars; nine to 12 feet of pasta; six feet of rice and beans; three to six feet of canned tomatoes and olives; and six to nine feet of marinated vegetables.

Wegmans is also going Mediterranean. The Rochester, N.Y.-based chain introduced seven varieties of private-label specialty olives this month. Imported from Greece, the olives are hand-harvested, naturally brined and packaged by hand. Many of the varieties, which include Pitted Kalamatas; Greek Olive Mix; Green Olives Stuffed with Roasted Red Peppers; and Green Olives Stuffed with Bleu Cheese, are also sold in Wegmans' Mediterranean Bar. A 13.4-ounce jar retails for $4.99, while a 10.2-ounce jar costs $4.49. The olives are identified with shelf tags that read “new item.”

The 70-store chain is also actively promoting the health benefits of its store-brand olive oils, which it imports from Italy. An endcap display in its Woodbridge, N.J., location features mild, pure and extra virgin varieties in containers ranging from 16.9 to 101 fluid ounces and priced from $4.99 to $17.49. Shelf signage helps take some of the mystery out of the selection process. The extra virgin olive oil tag reads: “least processed of all olive oil, flavor determined by climate, region and harvest time, best if used as condiment or finishing oil.”

Other imported items, such as Krinos Tahini Ground Sesame Seeds and Peloponnese Sweet Pepper Spread, are merchandised in the European section of Wegmans' international aisle.