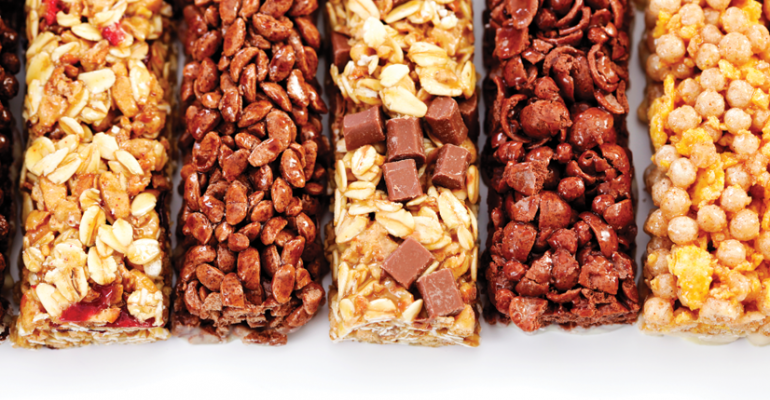 <p> Some of the more popular bars combine delicious sweetness with nutritional value.</p>

&ldquo;People eat these as meal replacements for breakfast or as an afternoon snack, so they want something healthier, something with protein that will keep them going until the next meal.&quot; &mdash; Roger McElroy, grocery buyer, Straub&rsquo;s

Dessert for breakfast? How about an afternoon pick me up?

Snack bars are making it all possible.

While the latest creations are not intentionally intended for post meal pleasure, many come in sweet treat flavors like mint chocolate chip, carrot cake and key lime pie.

Retailers report an uptick in sales of such sumptuous snacks, particularly if the products are also packed with organic or natural ingredients. Those containing essential vitamins, nutrients, protein and functional foods like pomegranate and goji berries are also popular.

At Straub’s, a St. Louis-based supermarket chain, select snack bars sell better than others. Some are decidedly dessert-like. Others are the always-popular sweet and savory varieties, according to Roger McElroy, grocery buyer for Straub’s.

“Vanilla yogurt Powerbar is a top seller, along with Kind almond and apricot bars,” said McElroy. “Chocolate is the No. 1 flavor of Clif bar, but we also carry carrot cake Clif bars, NuGo in mint chocolate chip flavor and Think Thin bars in brownie crunch, all of which resemble desserts. These dessert flavors aren’t the biggest sellers here, but there are enough people out there looking for unique flavors to justify them.”

The chain determines inventory by tracking sales of brands and varieties. Those that rank highest in sales are kept in-house. Underperformers are rotated out and replaced with the latest introductions.

Category performance is uneven, according to the latest figures from SymphonyIRI Group, a Chicago-based research firm. Overall, it appears sales are in a slump.

However, during the same time period, sales of nutritional/intrinsic-value health bars — including brands such as Kind, Powerbar, Atkins, Balance, Clif and Zone Perfect — actually rose 17.7% to $787 million.

The snack bar segment has grown at nearly twice the rate of other snack foods and almost three times the rate of total packaged foods during the past 10 years, according to Rabobank Group’s report, “Never Eat More Than You Can Lift.”

The report listed Clif Bar & Co., General Mills and the Kellogg Co. as three of the leading manufacturers in the sector.

“I see too much space devoted to snack bar brands that no longer sell as well as they used to and, therefore, they limit space for innovative new products,” Bishop told SN. “The open question facing the category is whether or not it is the best place to display premium health-oriented snack bars.”

One suggestion Bishop offered is to cross-merchandise snack bars with their key ingredients. Banana and granola snack bars might fit in well in produce. Bars containing flax seed would work well in a center store aisle next to packages of flax seed, he said.

Like Straub’s, space is at a premium at Highland Park Market, an upscale chain based in Glastonbury, Conn.

“We have small, 4-foot sections of snack bars, so each one has to sell well or it doesn’t make sense to have it in there taking up space,” said Tim Cummiskey, grocery manager at the retailer’s Glastonbury location. “We have some of the new dessert-type flavors like Lära Key Lime Pie, but while people might like them, they aren’t flavors that appeal to everyone. Mostly, people come in and grab them for lunch if they’re in a hurry or in place of a candy bar as a healthier choice.”

Whether replacing a meal or savoring an afternoon snack, an increasing number of Highland Park’s shoppers are reaching for natural or organic snack bars. Goji berry and pomegranate are popular at the moment — in essence, the same flavors that are trending in other categories, said Cummiskey.

Gluten-free, organic, vegan and all natural are phrases found on many snack bar packs in supermarkets today. According to Bishop, consumers across the country are less into sugar-packed, highly processed snacks.

Instead, they want snack bars that are healthful while still portable enough to eat on the run.

“Pomegranate and flax are big sellers right now for health reasons. So are banana and granola, which when called out on packages indicate that the products are made with real foods,” he said. “Some manufacturers are also segmenting more effectively nowadays, with snack bars centered on women’s health, energy and other specific subjects. The more specific they can get, the better the chances of attracting loyal customers.”

Indeed, Luna makes Women’s Nutrition bars with calcium and folic acid that are designed by women, for women. Balance has a line of high-energy snack bars that follow the 40-30-30 principle — 40% of calories from carbohydrates, 30% from protein and 30% from dietary fat — with the tagline “Energy bars to keep you going.”

Glucerna makes snack bars for diabetics. And all Kind bars are gluten-free, an appealing option for those with celiac issues.

Straub’s shoppers have shifted away from sugar-infused granola and breakfast bars and toward more nutritional products.

“We sell more specialty lines than national brands like Kellogg, Quaker and Nature Valley by far,” said McElroy. “People eat these as meal replacements for breakfast or as an afternoon snack, so they want something healthier, something with protein that will keep them going until the next meal. Once they’ve narrowed it down to the healthy bars like Clif, Lära and Kind, the biggest factor that leads them to choose one over another is taste, which is where the dessert profile comes into play.”

Gluten-free honey and walnut bars by Rise, and Think bars in chunky peanut butter are two of the most frequently purchased bar products at Straub’s.

The category has become so popular, upwards of 30% of the snack bars sold there are on sale at some point year-round, said McElroy.

Despite the proliferation of SKUs, promoting this category should be simple and straightforward, according to Robert Passikoff, president, New York-based Brand Keys.

“More and more consumers are looking at snack bars as a standard snack option and yet some supermarkets still bury these in inconvenient locations, like the bottom shelf near the cereal bars,” said Passikoff. “They need to be in a section of their own with at-shelf signage that clearly states what they are. Retailers should track the best sellers, merchandise those at eye level and let shoppers make their own decisions to what other unique flavors they might want to try.”

The best time of the year to advertise is now, as people steadfastly adhere to their New Year’s resolutions to eat healthier.

“Our shoppers buy bars for meal replacements, for an after-workout protein boost and for snacks for their kids,” Hiller said. “It’s not enough to have the convenience of on-the-go though. People want the bars to be gluten-free or vegan, and fiber is very important to them. Many want a low glycemic index or all natural or contain a combination of functional ingredients like flax seed or dried superfruits.”

Hiller noted that some companies are now adding omega-3s too, which is drawing a lot of attention from health-conscious consumers.

Kind bars are top sellers at Hiller’s Markets. The main reasons shoppers select this line is because it meets many of the aforementioned criteria, Hiller said. The entire line is gluten-free and contains all-natural, functional ingredients.

Kind’s Plus line, for instance, includes a bar that boasts 10 grams of protein from almonds, walnuts and macadamia nuts. The Pomegranate Blueberry Pistachio variety has antioxidants and 50% of the recommended daily value of vitamins A, C and E. The line’s Almond Cashew + Flax contains 50% of the daily value of B3, B6 and B12.

Most of the growth in the snack bar market has been driven by Clif Bar & Co. However, it’s the newcomers that are pushing the envelope with more unusual blends and a strong focus on hyper-healthy ingredients and environmental sustainability.

At St. Louis-based Straub’s, the more unique the ingredients, the better, said Roger McElroy, grocer buyer for the chain.

“I have my eye on two brands that just entered the mainstream market — Kate’s and Raw Revolution,” he said. “Kate’s hits on a variety of trends, including sweet tooth flavors and ingredients that appeal to organic- and natural-loving consumers.”

Raw Revolution’s snack bars are 100% organic and come in flavors such as Cashew and Agave Nectar, and Hazelnut and Chocolate. One Raw Revolution bar, Spirulina Dream, actually contains spirulina, a high-protein, vitamin- and nutrient-rich algae with health benefits that help with appetite suppression and inflammation reduction, as well as boosting energy and immunity levels.

Raw Revolution recently underwent a 70% reduction in plastic usage and a significant reduction in cardboard consumption to boot, promoting this earth-friendly action to its environmentally mindful customers.

“These new players are not found everywhere, so having them in-store would differentiate a retailer from one without such unique offerings,” said McElroy. “As this category develops further, I expect to see even more unusual ingredients, those that pack an even bigger health punch while being earth friendly too.”