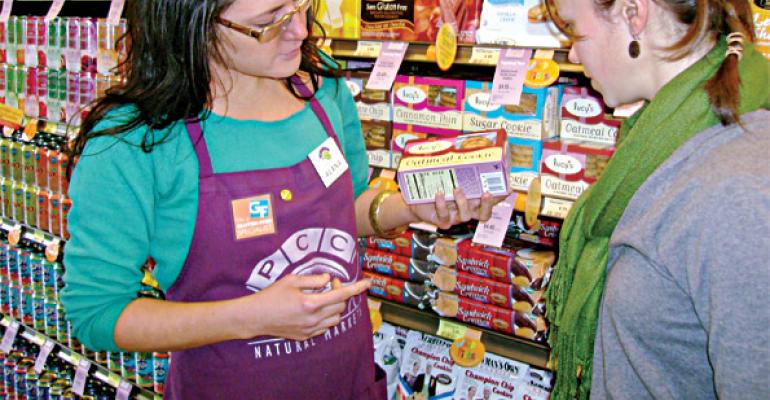 One-on-one interactions, community fairs and classes are just a few of the ways retailers are reaching out to gluten-free shoppers

“I was wondering, what if nobody comes?” said the director of the three-store company’s gluten-free programs and organizer of the all-day event. “I was really worried.”

The anxiety was for naught, it turns out. The doors opened at Dorothy Lane’s flagship store in Dayton, Ohio, and customers came streaming in. They sampled offerings from the vendors positioned around the store, sat in on seminars and chatted with one another like old friends.

“It was packed, I mean packed,” said Diltz. “You couldn’t even find a free grocery cart.” 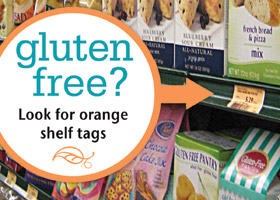 What Dorothy Lane experienced is not so different from what many other retailers have gone through. Having witnessed the incredible popularity of gluten-free products, which have doubled in sales since 2005 and are now worth more than $6 billion, according to market research firm SPINS, they’re trying to further capitalize on the opportunity by reaching out to the growing community of gluten-intolerant shoppers. Many of them don’t quite know what to expect.

According to Diltz, connecting with gluten-free consumers is a significant investment because they crave more than just gluten-free products. They’re also looking for fellowship, knowledge and support, she noted. To this end, supermarkets are offering fairs, classes, dedicated websites, and much more. And while it seems there’s no one right way to reach out to gluten-free shoppers, experts believe commitment is the key.

“What turns this community off is when they’re trying to get information from retailers who don’t know what they’re dealing with,” said Cynthia Kupper, executive director of the Gluten Intolerance Group, an educational nonprofit based in Auburn, Wash.

Many leading gluten-free retailers have found success in utilizing numerous marketing platforms, from the intimacy of one-on-one consultations with store dietitians to the marquee appeal of a community fair. Ingles Markets in Asheville, N.C., offers information and consultations through its dietitian, Leah McGrath. The company also sponsors a gluten-free fair each spring that features sampling booths from more than 50 national vendors, including Bobs Red Mill and Beanitos, as well as numerous local vendors. There’s also a raffle, keynote speakers and other festive activities.

Nature’s Market in Kent, Wash., also hosts a gluten-free fair once a year that brings in close to 50 vendors. Assistant manager Heather Sykes said the event used to take place twice each year, but that these became so popular they had to be consolidated into one large fair in the fall. To keep shopper excitement high throughout the year, Sykes said the store offers regular samplings of gluten-free products.

“We like to put products out and let people try before they buy,” she said.

Sykes also places a lot of emphasis on educating her employees. Nature’s Market carries hundreds of gluten-free products, and she makes sure associates know all of them — from the dozens of items in the dedicated gluten-free section to the hundreds integrated with the store’s specialty selections. Sykes estimated that 25% of her store’s grocery products are gluten free.

“We’re always making sure our employees are aware of what is gluten free and what isn’t because products can change, items get moved around and so you have to be careful,” said Sykes.

Employee education is at the heart of the gluten-free certification program that the Gluten Intolerance Group offers. Companies who sign up are required to establish a training program for all associates. That way, stumped shoppers can turn to anyone for help and not have to worry about quizzical looks or being passed along to another worker.

PCC Natural Markets in Seattle is currently the only supermarket that has received certification with GIG. Kupper said that Lunds & Byerly’s in Minneapolis is in the process of being certified, and the organization is in talks with Whole Foods. For its part, PCC credits the certification for helping it achieve 16% growth year-over-year in the gluten-free category. In addition to employee education, the certification requires companies to define and list gluten-free products on their website and to offer community outreach programs. Grocery merchandiser Scott Owen said every store has banners in the front windows that advertise the company’s endorsement from GIG.

“It has certainly brought us new customers and made shopping for gluten-free products easier,” he said. 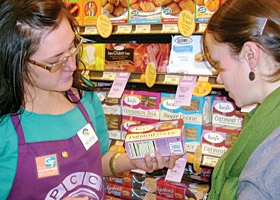 All level of PCC employee is trained to assist gluten-free shoppers.

PCC also markets its gluten-free efforts through in-store classes and events. It holds a “Walk, Talk & Taste” tour four times a year where nutrition associates walk shoppers through the stores, pointing out various products and offering samples. The co-op plans to expand these tours in the year ahead and to offer gluten-free cooking classes through its PCC Cooks culinary education program.

Dorothy Lane Market, meanwhile, wants its gluten-free shoppers to feel they’re not sacrificing anything by cutting out gluten. That’s why a few years ago the company started a Gluten Free Food Lovers Club, an outgrowth of its Healthy Living department that meets once a month at its Washington Square store in Dayton. The agenda usually includes a speaker, product samples and a store tour to show off the latest gluten-free offerings. Diltz, who heads up the club and is gluten intolerant herself, said it’s a way of establishing a sense of community within the company’s gluten-free shopper segment. She specifically tries to highlight gluten-free alternatives to traditional favorites, which she believes are improving from a taste perspective.

“We’ve found that people are not necessarily interested in gourmet meals,” said Diltz. “They’re interested in comfort foods and, ‘How do I make this thing I’ve made forever, gluten- free?’”

Another popular platform for companies to deliver their gluten-free messages is online via their websites and social media. Dorothy Lane Market’s gluten-free club has its own Facebook page, as does Ingles’ Gluten Free Asheville fair. Retailers from mainstream chains like Safeway to single-store operations like Nature’s Market are tweeting, blogging and altogether promoting their gluten-free products and interacting with shoppers.

“This consumer needs more than just a list of General Mills products,” said Dom Alcocer, marketing manager with the company’s new ventures group. “We need to surround their whole day in gluten free.”

In the absence of a federal definition for “gluten free,” the food companies themselves are the ones left to define the coveted term — or not. For manufacturers, third-party certifiers have cropped up as a testing option for those looking to prove their claims and stand out in the marketplace. Quality Assurance International and the National Foundation for Celiac Awareness recently introduced a standard that certifies products containing fewer than 10 parts per million of gluten. There’s also the Celiac Sprue Association, which has a label indicating fewer than 5 ppm.

The Food and Drug Administration is currently finalizing its standard, which requires no more than 20 ppm of gluten. Until that time, many retailers are content to take manufacturers at their word.

“We only mark items gluten free if the manufacturer states they are on the label,” said Scott Owen, grocery merchandiser for PCC Natural Markets. “Until the FDA sets a national standard for parts per million, we feel this gives customers information to make an informed choice.”