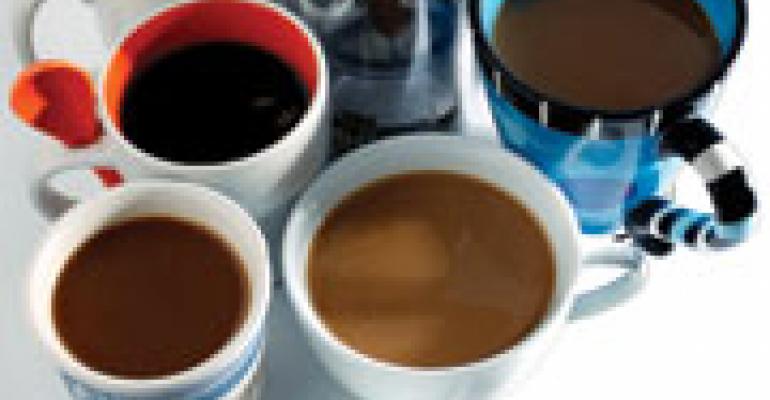 Single-serve coffee and tea pack convenience &#8212; and a messag

FEW OTHER COMMODITIES ARRIVING ON supermarket shelves are as well documented as coffee. From the bean, consumers can determine country of origin. Reading the label, they discover the region the beans came from, perhaps even the farm itself. Studying the package often reveals narratives describing the deeper benefits a purchase has on the bean farmers, their families and the environment.

Part of what makes the coffee story unique is that each step in the process — from tree to shelf — is recorded through channels that are largely free of government regulation. With the exception of certified organic, authenticity is verified through credible alternatives that vouch for a product's lineage or environmental impact.

Several organizations have emerged as stewards of the sustainable coffee business. Fair Trade USA and the Rainforest Alliance are two of the leading groups helping to cultivate sustainable coffee-growing practices. Other, smaller non-profit associations also contribute. Yet getting their particular message to consumers has been troublesome. A recent survey by Mintel shows that the concept of “sustainability” among consumers is high — some 13,000 products making green claims have been introduced around the world since 2005 — but comprehension of many terms remains low.

“Packaging claims such as ‘recyclable’ or ‘eco- or environmentally friendly’ are fairly well known to consumers, but sustainable product claims such as ‘solar/wind energy usage’ or ‘Fair Trade’ have yet to enter the mainstream consumer consciousness,” stated David Browne, a senior analyst at Mintel. “They may have heard of the terms, but they'd be hard-pressed to define them.”

Still, companies selling coffee try to get the message out, and consumers keep drinking. According to the 2010 National Coffee Drinking Trends Study from the National Coffee Association, the percentage of consumers drinking coffee in the past day and past week has remained stable despite the recession, though consumption has shifted decidedly to in-home brewing. In 2010, 86% of past day coffee drinkers consumed coffee prepared at home, an increase of 4% from the year before. At the same time, the percentage of past day coffee drinkers who consumed coffee prepared out-of-home declined from 31% in 2009 to 26% in 2010.

What are they drinking? In the past year, there's been a marked shift toward single-serve brews. Statistics from SymphonyIRI Group for the year ending Oct. 3 show that sales of single-cup coffee in the food-drug-mass channel (excluding Wal-Mart Stores) skyrocketed 107% to reach $183 million. The segment is growing quickly, and is now more than half the size of whole bean coffee, where sales during the same time period actually dropped 2.2% to $327 million.

As single-serve products deepen their presence in supermarkets, retailers are making more room for them.

“We started out with 3 feet and now it's up to 9 feet, and that's getting tight. It's selling really well,” said John Eichler, grocery manager at Jungle Jim's International Market, Fairfield, Ohio. “We started heavily into it about 8 or 9 months ago. We realized that 3 feet wasn't going to cut it so we expanded it, and now we're thinking of doing it again.”

The number of machines and coffee systems on the market continues to multiply. Just this month, Starbucks announced it would be introducing a proprietary home brew system using its Via instant coffee line. At the moment, Jungle Jim's stocks only single-serve packs made by Green Mountain Coffee Roasters, Waterbury, Vt., though Eichler says customers have also been asking for Senseo pods, made by Philips and Douwe Egberts, a subsidiary of Sara Lee Corp.

Other competing systems include Dolce Gusto, a partnership between Nescafé, Krups and Nespresso; as well as Tassimo, which uses machines developed by Kraft Foods and manufactured by Bosch. Each system brews coffee, tea and chocolate using different containers. GMCR uses plastic, lidded K-Cups, while Tassimo employs sachets called T-discs and still others use pods.

“It's a growing category for sure,” added Eichler. “Now it seems that more and more people are calling and asking for them.”

“As soon as we got them in our store, we posted the news on our Facebook pages, and in Russ's Market, which is our conventional store group, we ran an introductory ad,” he said. “Since then, sales have improved every period, and we expect that to continue as the weather gets colder and people start buying the brewing systems for the holidays.”

Green Mountain, along with its Keurig business unit, dominates the category with its well-known K-Cups and Keurig brewers. The most popular package in supermarkets, the 12-count K-Cup pack, has reached 62% ACV nationwide, according to SymphonyIRI. What's more, total K-Cup dollar sales now outpace sales of most major specialty coffee brands.

“Our offering fundamentally sits at the intersection of a number of key consumer trends that really creates a number of unique opportunities for us and our grocery partners,” noted T.J. Whalen, vice president of marketing in Green Mountain's specialty coffee business unit.

Companies like GMCR — along with pod makers like Senseo or Tassimo — know single-serve brews are convenient and waste less product. Practicality is repeatedly cited as one of the top reasons consumers love their one-cup systems. Yet manufacturers also know the cups, pods and discs are an ideal venue to get the sustainability message across.

“For a long time we've seen that consumers' interest in, and receptivity to, certified sustainable products outstrips their actual purchasing of those products, either because of a lack of availability or price, or because they're not familiar with certain brands,” Whalen noted.

Insufficient awareness hasn't stopped roasters from incorporating fair trade or eco-friendly varieties in their single-serve lineups. For example, Tassimo offers among its various brands Kenco, blends that include sustainably produced coffees from Rainforest Alliance-certified farms. Green Mountain Coffee branded products lead in both dollar and volume share for fair trade coffee. And though polls might show struggling awareness with fair trade's causes, those who are coffee drinkers seem to possess a more intimate knowledge of fair trade. The NCA's 2010 study revealed that awareness of fair trade increased 6% since 2009: 34% of consumers are aware of fair trade in 2010, as compared with 48% who are aware of organic.

Sustainability has come to define many aspects of the coffee culture, and manufacturers and roasters continue to take steps to deepen their commitment. Caribou Coffee, the second-largest coffeehouse chain in the United States, behind Starbucks, recently announced that its regular espresso is now 100% sourced from Rainforest Alliance-certified farms, an achievement that brings its full line of coffees to 85% of compliance with Rainforest Alliance principles. The chain's goal is to attain 100% certification by the end of 2011.

Similarly, Green Mountain announced that its two most popular coffees — Our Blend and Vermont Country Blend — have been “traded out” and are now 100% fair trade-certified. Both are part of the company's giant K-Cup program.

“About 30% of our overall volume is fair trade and/or fair trade/organic,” said Whalen.

Strong single-cup sales are helping retailers realize they don't have to sacrifice the sustainability message, which makes Eichler at Jungle Jim's happy.

“Bring it on. I've got one huge aisle devoted to coffee,” he said.

Much attention has been paid to sourcing sustainable coffee. Now, manufacturers of single-serve systems are taking steps to address the environmental impact their products have once they've served their purpose. Foil, plastic and other elements left over from the brewing process are perceived by some consumers as inconsistent with sustainability.

The category leader, Green Mountain Coffee Roasters, began offering K-Cups made with 90% paper for its Celestial Seasonings Honey Lemon Ginseng Tea. The company is also testing a pair of waste-diversion initiatives in high-usage location with the goal of keeping the plastic cups out of landfills.

“We're trying to determine if there are real benefits involved here, or whether it's just optical,” said Michael Dupee, Green Mountain's vice president of corporate social responsibility. The company is employing life cycle analysis to determine where else upstream or downstream other changes can be implemented, he added.

Many eco-minded consumers have taken the issue into their own hands, and use a reusable filter assembly first introduced to the market in 2005.