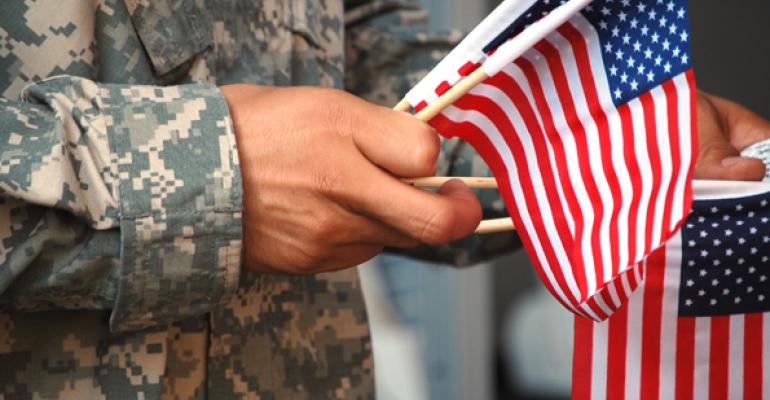 'Believe In Heroes' Grows and Evolves

&quot;We are up to about $10 million that we anticipate we will have raised by the end of 2013. We believe it has grown to become the largest program of its kind in the United States.&quot; &mdash; Aidan Tracey, president Acosta Mosaic Group

JACKSONVILLE, Fla. — The Believe in Heroes cause-marketing campaign, now in its fourth year, has evolved to become what might be the largest effort of its kind, according to Acosta Sales & Marketing, which created and oversees the effort.

The campaign, which this year involves more than 110 retailers and more than 40 CPG companies, funds programs through the Wounded Warrior Project, also based here.

“It started locally in Florida in 2010, and we raised about $200,000 that year. Now we are up to about $10 million that we anticipate we will have raised by the end of 2013,” said Aidan Tracey, president of Acosta Mosaic Group. “We believe it has grown to become the largest program of its kind in the United States.

“To get that many brands and retailers excited about one thing is a great feeling for our organization, and obviously it’s a great benefit for the Wounded Warrior Project.”

The Wounded Warrior Project supports a range of programs that seek to help veterans and service members who have sustained mental or physical injuries since Sept. 11, 2001. It was launched in 2003, and is marking its 10th anniversary tis year with the tag line, “A Decade of Service. A Lifetime of Commitment.”

Believe in Heroes is one of several campaigns that support Wounded Warriors, Brea Kratzert, director of strategic partnerships at WWP, told SN.

“It also reaches the public where they are — and they can support it simply by going to the grocery store.”

She said the campaign is unique in that it involves so many brands and retailers, and also in the awareness it creates, both among consumers and among veterans themselves.

The Believe in Heroes campaign began with Jacksonville-based Winn-Dixie as the lone retail participant, but it has since expanded nationwide. This year some 23,320 individual supermarkets have displays set up in their stores. The campaign runs from Sept. 11 to Nov. 11, with the big marketing push coming as Veterans Day approaches.

Individual brands participate by donating to Believe in Heroes. Acosta puts together a freestanding insert with all of the participating brands and their offers, which was delivered to 53 million households on Nov. 3.

In addition, the offers are available online for download at wwpbelieve.org. Special coupons are also available for the first time this year through the SmartSource Xpress mobile coupon application.

Acosta also has engaged in a more robust social media effort around the campaign this year, with a dedicated Facebook application that it created, as well as outreach through Twitter, Instagram and Pinterest, and through some “key influencers” in the blogosphere.

'An Opportunity' for Food Lion

Salisbury, N.C.-based Food Lion led all participating retailers with its Believe in Heroes effort last year, raising nearly $1 million — a level it expects to meet or exceed again this year, according to Tosh Potter, manager of Center Store merchandising at Food Lion.

“It’s an opportunity for us to support a great program, honoring the veterans who have served our country,” he said.

He said Food Lion has multiple displays in all of its stores, and also conducts several efforts on the digital front, promoting not only the products involved but also letting customers know how to support Wounded Warriors with direct donations.

Christy Phillips-Brown, a spokeswoman for Food Lion, said the chain’s customers “are passionate about military causes.”

Food Lion also offers 10% off for all active, retired or honorably discharged veterans on Veterans Day, among other efforts to support the military throughout the year.

White Plains, N.Y.-based Sabra Dipping Co. is one of the newest brands involved in Believe in Heroes, and one of the first from the perimeter of the store.

“Recognizing that these volunteers often come from communities where there’s not a lot of opportunity — they see the service as a way to improve their lot in life and get training and come back and be competitive in the workplace and support their families — and they put it all on the line,” said John McGuckin, executive vice president of sales at Sabra. “I think we need to bring as much attention as we can to these folks, and give as much help as we can so they can experience a good life.”

Sabra is offering a $1-off coupon as part of the program, and has created custom displays for each of the retailers that carry the company’s products.

Paul Cooke, vice president and director of industry development at Nestlé Purina Pet Care, said the opportunity to work with retailers on this campaign and offer them something unique was important to that company as well.

“This is an outstanding cause that connects personally with our customers and consumers,” he said. “Our military gives the ultimate sacrifice so that we can live the lives that we do.”

He said Nestlé Purina Pet Care sees Believe in Heroes as “so much more than just a merchandising opportunity.”

“It’s a way for us to help make a difference for the families of our wounded warriors,” he said.

The effort has grown each year at Nestlé Purina, and this year Dog Chow, Beneful, Cat Chow, Friskies and Beggin Strips were all involved. All of them have increased their involvement through digital media, merchandising vehicles and coupon support, Cooke said.

The company has established Believe in Heroes as a major program in its fourth quarter tying in with Veterans Day.

“There is a great opportunity for our retail partners to leverage a great cause between Halloween and Thanksgiving,” Cooke said.

In a statement, a spokeswoman for Nestlé Nutrition said the company’s participation in Believe in Heroes “is an extension of the ongoing efforts to support veterans, which includes providing cash donations to the Wounded Warriors Project and targeting veterans for employee recruitment.

“Nestlé is proud to give back to those who serve us so humbly.”