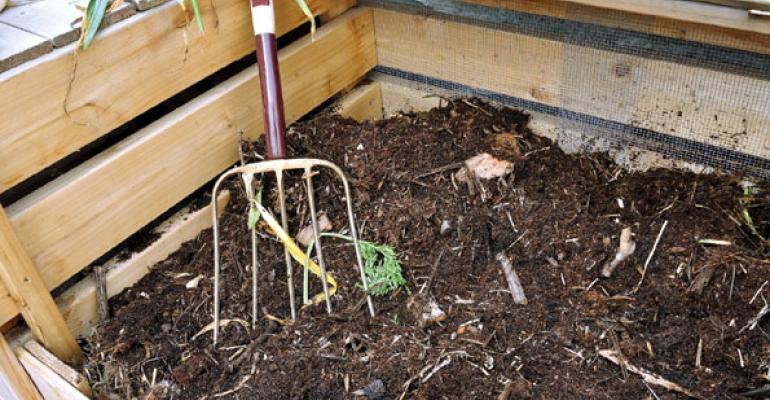 Recycling catches on as a way to reduce solid waste costs. &ldquo;We put so much valuable resources into growing food that it should never go into landfill.&rdquo; &mdash; Michael Hewett, senior director of sustainability and environment, Publix Super Markets

Not many people knew what to make of the 18-foot-tall fixture that was installed behind PCC Natural Markets’ Issaquah store one morning back in March. The contraption included a large silo-looking cannister attached to a metal shed.

The strange-looking apparatus is actually a state-of-the-art food scrap “harvester” being tested by PCC as part of its ongoing waste reduction program. The harvester, developed by WISErg Corp., a local clean technology firm, creates organic liquid fertilizer using discarded food scraps. The finished product is sourced from PCC’s own food waste and available for sale to PCC customers in all nine of the retailer’s locations.

“The WISErg Harvester enables businesses like ours to turn the problem of food scrap disposal into an opportunity for our communities and the environment,” said Tracy Wolpert, PCC’s CEO.

SN Poll: How do you dispose of perishable food unsaleables/waste at your stores?

Diverting solid waste has become an industrywide priority. Last year the a number of trade groups decided to do something about the vast amount of food waste that still ends up in the nation’s landfills instead of being diverted to better uses. It’s one of those no-brainer issues that virtually everyone agrees is bad for the environment and costly for business. A large part of the effort is simply pointing out feasible alternatives to dumping unclaimed food stuffs — namely donating the edible part to food banks and recycling the inedible part into compost or energy, or offering it to farmers as animal feed.

“We put so much valuable resources into growing food that it should never go into landfill,” said Michael Hewett, senior director of sustainability and environment at Publix Super Markets.

Publix expanded a perishable recovery program in late 2010 in partnership with Feeding America affiliates at select stores to donate unsaleable but still edible produce, meat, deli and dairy products. Last year, the chain rolled out the program companywide and continues to add units in 2012, with roughly 70% of its stores now participating, said Maria Brous, a Publix spokeswoman.

The chain has also been partnering with Waste Management on a composting pilot project using an organics recycling facility opened by the hauler last November in Okeechobee, Fla. The pilot began with 42 Publix stores contributing organic material to the facility, which creates compost that is marketed by Waste Management subsidiary Garick.

Larger industry strategies are being coordinated by the Food Marketing Institute, Grocery Manufacturers Association and the National Restaurant Association. Last July the groups formed the Industry Coalition of Food Waste and launched a three-year initiative, “Food Waste Opportunities and Challenges,” of which Publix’s Hewett is co-chair along with Bob Branham, director of customer sustainability at General Mills.

The measure has quickly gained the support of various retailers, including Wegmans, Ahold, Supervalu, Kroger and Wal-Mart Stores, and such CPGs as Campbell’s, Kellogg’s, ConAgra Foods and Sara Lee, as well as Feeding America and Waste Management. It has committees on assessment, communication, emerging solutions and policy.

According to research conducted for the groups by Business for Social Responsibility, 121.6 billion pounds of post-harvest food waste is generated annually in the U.S. — between 20% and 40% of all food grown and processed. Of that, about one-third, or 42 billion pounds, is diverted to useful purposes. That means that more than 79 billion pounds ends up in landfill, creating “an enormous amount of greenhouse gases” in the form of methane, pointed out Jeanne von Zastrow, FMI’s senior director of sustainability and industry relations.

The BSR study also broke out how post-harvest food waste is distributed. The largest share, 44%, comes from consumers. Supermarkets account for 11%; restaurants, 33%; institutions, 10%; and industrial, 2%.

Retailers of all sizes are getting involved. Rudy Dory, owner of one-store Newport Avenue Market, and a member of the FMI board, estimates that he sends about one ton of food waste per week to composting, plus hundreds of pounds per week in donations. He has reduced his monthly landfill contribution (including inorganic materials) from 251 yards to 104 yards, a drop of nearly 60% — which saved him about $1,000 in the first quarter of 2012, he said. In February, his store was recognized with the first Leadership in Composting Award from the Oregon Refuse & Recycling Association.

The potential for profit isn’t the primary motivator behind these waste reduction measures, but it certainly helps. At PCC, the Harvester costs range from $40,000 to $55,000 per store and monthly servicing can range from $350 to $800, compared to about $1,000 per month in hauling fees. ROI is estimated at about seven years, but that could be much less as fuel costs soar, according to officials. Initial capital costs are also offset by the profit from selling the organic fertilizer.

At this juncture, the industry’s three-year food waste plan is focused on what it alone can do about preventing and diverting food waste. But everyone involved has realized that recruiting consumer support will be integral to winning the battle against waste.

“Initially we need to be focused on our own four walls,” said Hewett. “But long-term, to tackle this issue, we have to deal with the large amount of food waste generated at the consumer level.”

Retailers interested in getting a handle on their food waste can join the Environmental Protection Agency’s “Food Recovery Challenge” by signing into its free WasteWise Re-TRAC program (www.epa.gov/foodrecoverychallenge/).

Re-TRAC is a web-based data management and reporting system that tracks a company’s waste generation and reduction activities.

Under the three-year WasteWise program, companies in year one commit to at least a 5% increase in at least one of the three food diversion categories (prevention, donation and composting) or a combined 5% increase across all three categories. In years two and three, they set site-specific numerical targets based on opportunities at their facilities.

Companies must commit to submitting baseline data within 60 days of registering with WasteWise and report on waste management activities annually.