Walgreens Boots Alliance (WBA) is one of the world’s largest retail, pharmacy and drug wholesale companies. WBA has more than 21,000 pharmacy, health and beauty stores in 11 countries and operates one of the biggest global pharmaceutical wholesale and distribution networks, with over 425 distribution centers delivering to more than 250,000 pharmacies, doctors, health centers and hospitals each year in more than 20 countries.

Walgreens Boots Alliance is the successor of Walgreen Co., founded in 1909 by Charles R. Walgreen Sr. after he bought the Chicago drugstore where he worked as a pharmacist in 1901. Walgreens grew primarily organically through its first century, joining the New York Stock Exchange in 1934, reaching $1 billion in sales in 1975 and opening its 1,000 drugstore in 1984. Strong growth continued in the 2000s — including the 3,000th store in 2000 and 6,000th store in 2007 — but Walgreens also began making acquisitions, including Happy Harry’s in 2006, Take Care Health Systems and Option Care in 2007, Duane Reade in 2010, and drugstore.com and beauty.com in 2011. Walgreens entered the global market in 2012 with the purchase of a 45% stake in U.K.-based Alliance Boots, followed up in 2014 with the acquisition of the remaining 55% interest, forming Walgreens Boots Alliance. In 2015, Walgreens unveiled a $17.2 billion deal to acquire rival Rite Aid Corp., but the Federal Trade Commission rejected the merger in 2017. To gain FTC approval, the companies later in 2017 downsized the deal to the sale of 1,932 Rite Aid stores to Walgreens. Currently, Walgreens is the second-largest U.S. drugstore retailer, with over 9,000 stores. 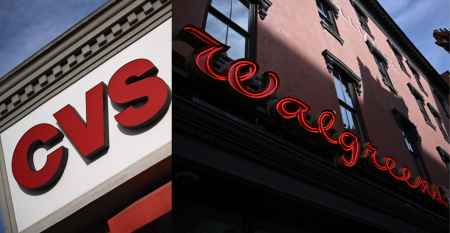 CVS, Walgreens agree to pay $10.7B to settle opioid lawsuits
Dec 13, 2022
A coalition of 17 state attorneys general negotiated the settlement