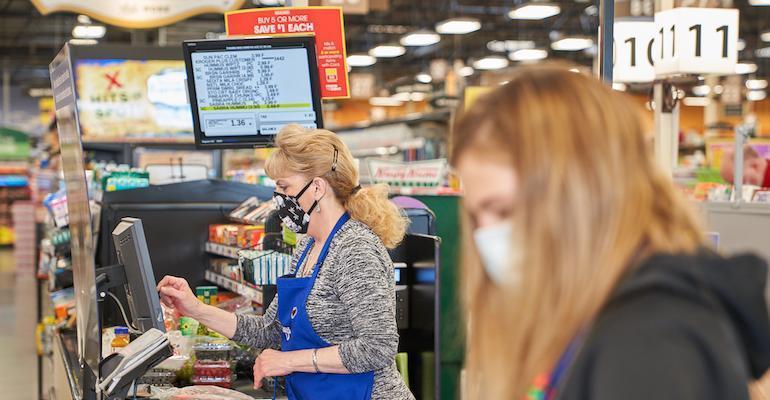 The U.S. Bureau of Labor Statistics (BLS) reported Friday that the CPI for All Urban Consumers rose 1% month to month (seasonally adjusted) in May after inching up 0.3% in April, which followed a 1.2% uptick in March. On a year-over-year basis, inflation remained high, rising 8.6% (unadjusted) for May. That was the highest 12-month surge so far in 2022, topping increases of 8.3% in April, 8.5% in March, 7.9% in February and 7.5% in January.

May’s food-at-home index jumped 11.9% year over year, vaulting the 10.8% increase in April and marking the largest uptick since the 12 months through April 1979, according to BLS. That came after increases of 10% in March — which BLS said represented the biggest 12-month rise since March 1981 — and 8.6% in February and 7.4% in January. 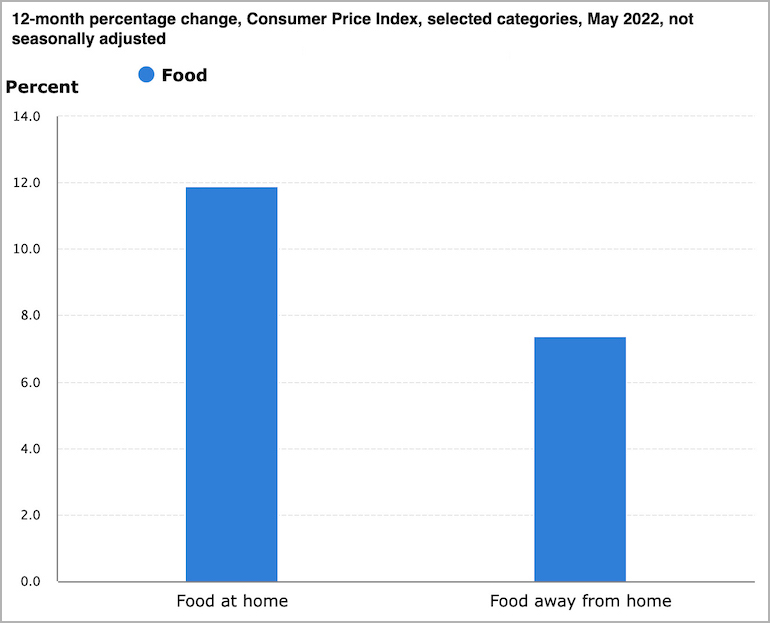 All six major grocery store food group indices rose over the 12-month span through May, with five of the six up over 10%, BLS noted. The index for meat, poultry, fish and eggs increased the most, up 14.2%, with the index for eggs surging 32.2%. The remaining groups saw growth ranging from 8.2% (fruit and vegetables) to 12.6% (other food at home).

BLS reported that the May index for food away from home rose by 0.7% month to month and by 7.4% year over year.

“It’s hard to look at May’s inflation data and not be disappointed. We’re just not yet seeing any signs that we’re in the clear. While elevated gas prices were the primary driver of inflation in May, prices for used cars and trucks rose once again after falling for the past three months. Shelter costs are also on the rise, even as rising interest rates drive down housing demand. Rising gas prices and elevated inflation are also taking their toll on consumers,” John Leer, chief economist at data intelligence firm Morning Consult, said in a statement on Friday.

“We're likely to see later today an extremely downbeat consumer, with consumer confidence falling in the first half of June,” Leer added. “To date, consumer pessimism has not driven a pullback in consumer spending, but elevated prices are eating into consumer savings, which could be the catalyst for a true contraction in real consumer spending.” 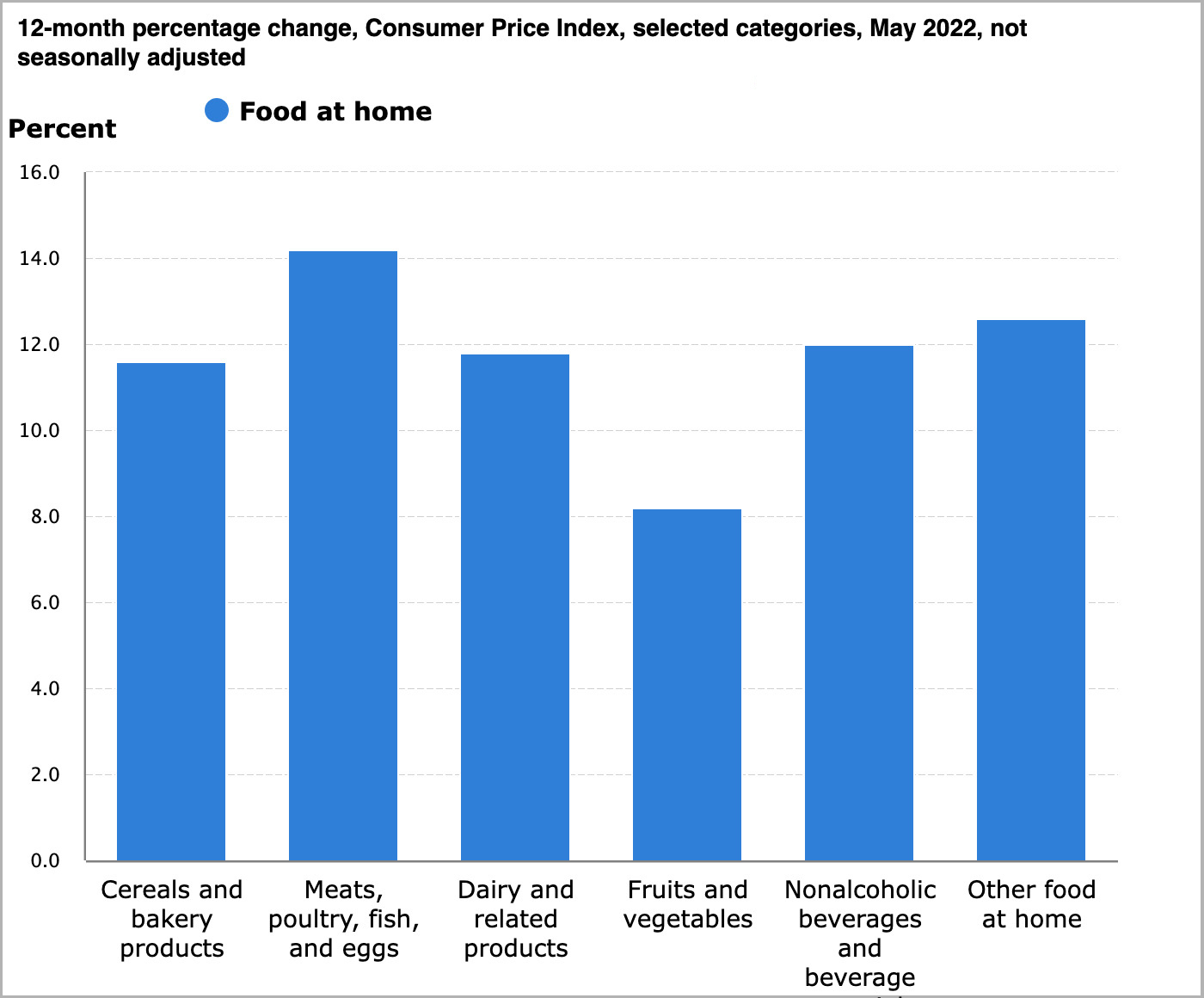 Morning Consult reported that its daily Index of Consumer Sentiment (ICS) hit a low in May, falling to 78.0 as of May 23, below previous lows on March 14 and April 7. Consumer sentiment has trended steadily downward since last summer of 2021, with the ICS as of May 23 at 9.6 points below its mark at the start of 2022 and 24.4 points below a pandemic-era high in May 2021.

“Consumer confidence dipped slightly in May, after rising modestly in April,” reported Lynn Franco, senior director of economic Indicators at The Conference Board.

“Purchasing intentions for cars, homes, major appliances and more all cooled — likely a reflection of rising interest rates and consumers pivoting from big-ticket items to spending on services. Vacation plans have also softened due to rising prices,” Franco explained. “Indeed, inflation remains top of mind for consumers, with their inflation expectations in May virtually unchanged from April’s elevated levels. Looking ahead, expect surging prices and additional interest rate hikes to pose continued downside risks to consumer spending this year.”

Consumer market data specialist Numerator said that, for the four weeks ended May 29, grocery prices jumped 14.6% year over year, above the 12.1% increase in early May and the sharpest rise since tracking began in June 2021.

Online remains the most impacted channel, Numerator noted. In the four weeks through May 29, grocery inflation was highest in the online and dollar channels (up 22.5% and 19.5% year over year, respectively). Both channels have seen significant growth in inflation rates in 2022, compared with year-over-year increases in the mass (13.7%), food (12.9%) and club (8%) channels.  Numerator’s research shows warehouse clubs offering the most stable grocery prices so far this year, upholding grocery pricing growth at 6.9% to 8.2% even as inflation rates in all other tracked channels have risen in 2022.

Health and beauty prices appear to be stabilizing, up 10.3% year over year in May, down from early 2022 levels, Numerator reported. Meanwhile, price inflation for household products hit new highs in May, escalating 15.7% versus a year ago, surmounting the previous peak of 14.5% in February.