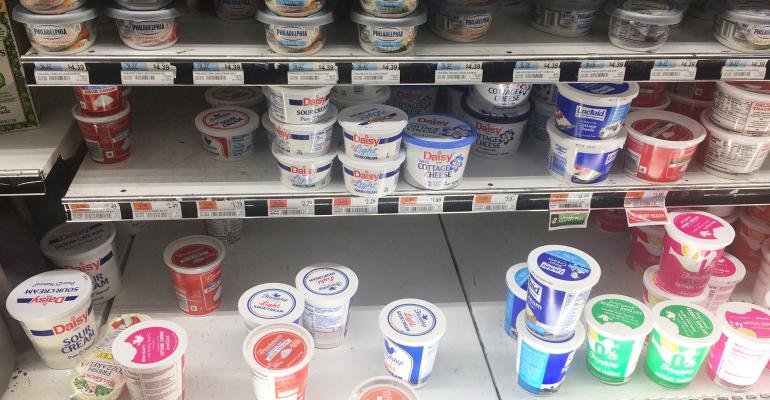 Michael Browne
Dairy products have been in high demand ever since the panic-buying week of March 15 when sales were up 60% over a year ago.
Product Categories>Dairy

The fresh food departments of the supermarket have undergone a remarkable change in the past two months, since the first outbreaks of coronavirus in the United States in February through the quarantine panic buying of March and April, and now the slow opening up of some regions of the country.

Through it all, the dairy category has been a winner, according to the latest research from the International Dairy Deli Bakery Association and IRI. 210 Analytics’ president Anne-Marie Roerink analyzed the IRI weekly sales findings, made possible by IDDBA, and prepares and authors their weekly reports.

Since the onset of coronavirus in the U.S., sales results for the dairy, deli and bakery departments have been decidedly mixed. While dairy has emerged as a sales leader and the packaged baked goods aisle is doing well, the limited service/assortment and/or shutting down of bakery and deli counters across many stores have had severely negative impact on sales in areas like deli prepared food, made-to-order cakes and other indulgent bakery items.

For the week ending April 19, total dairy sales were up 16.4% year over year while fresh bakery was down 3.9% (its first negative weekly showing since IDDBA began the reports at the end of February) and total deli sales plummeted by 25.5% year over year, a distressing trend that began in late March with consecutive double-digit sales drops every week. 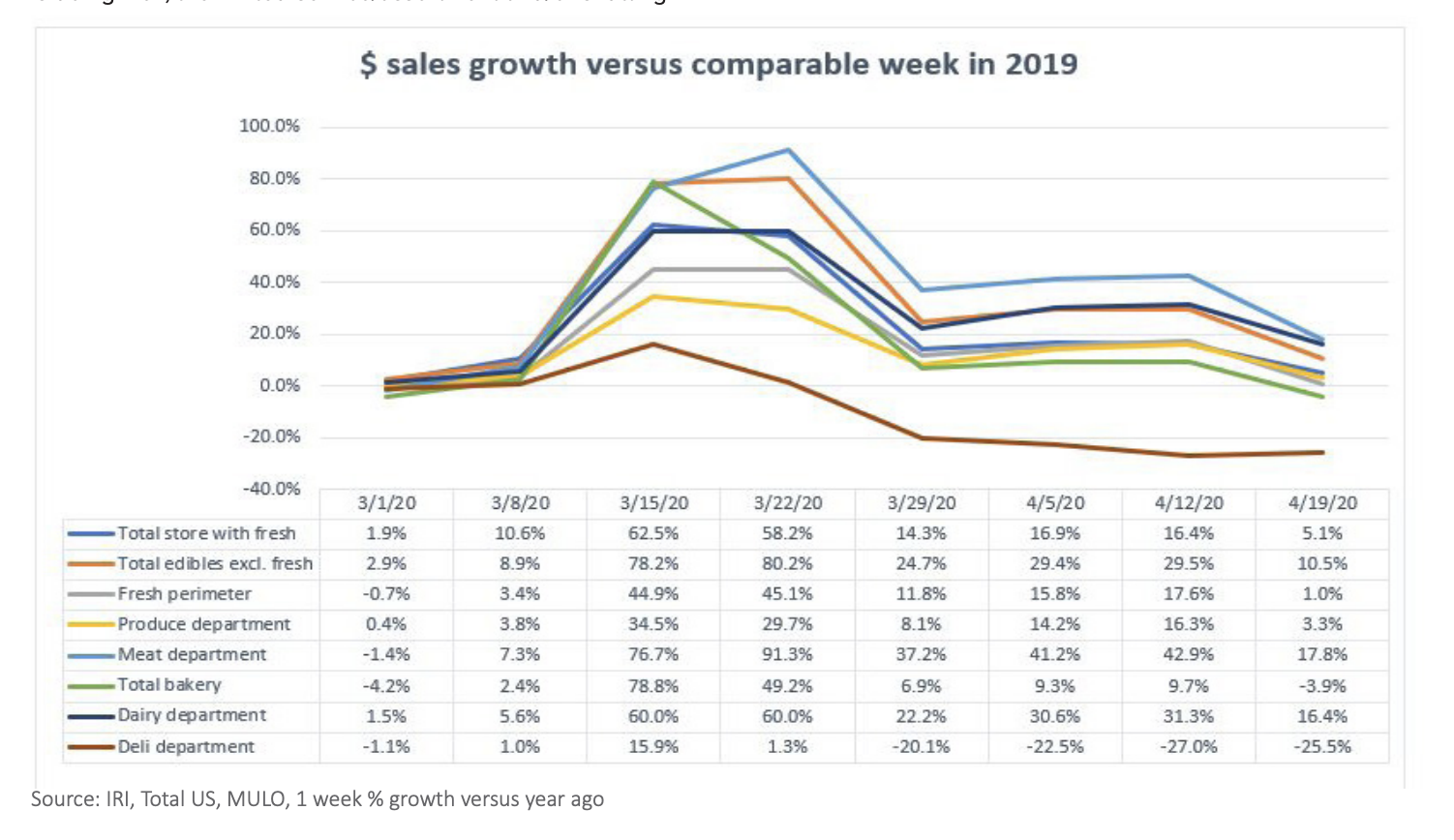 For dairy, sales gains have been in double digits over the comparable week in 2019 for six weeks in a row. Gains for the week ending April 19 were up 16.4%, driven by continued high interest in milk, cheese, egg, butter and creamers. These same items have been in high demand ever since the panic-buying week of March 15 when dairy sales were up 60% over a year ago.

“Quarantine baking is a thing, whether as a way to entertain the kids, enjoy a little indulgence, learn a new skill or cope with stress during these difficult times,” said Abrielle Backhaus, research coordinator with IDDBA. “For that matter, ‘insourcing’ altogether is a big quarantine trend, as consumers are learning to live without their daily coffee runs and lunch out. This is resulting in more ‘do-it-yourselfers’ in the kitchen.” Hence, the continued run on dairy ingredients needed for recipes.

Still, many shoppers continue to experience limited supply in some dairy categories. Communicating about shortages remains important, particularly for online orders, noted Backhaus. “Creating positive experiences for first-time online buyers is extremely important for repeat business,” she said. “Alert of substitutions in the current retail climate is key as many dairy items continue to run low on supply.” Butter and eggs continued to have the highest sales growth during the third week of April versus the comparable week in 2019, despite going up against Easter 2019 sales. Natural cheese had the highest increase in absolute dollars, with year-over-year sales up $103 million, followed by eggs up by $79 million and milk, with an additional $59 million. 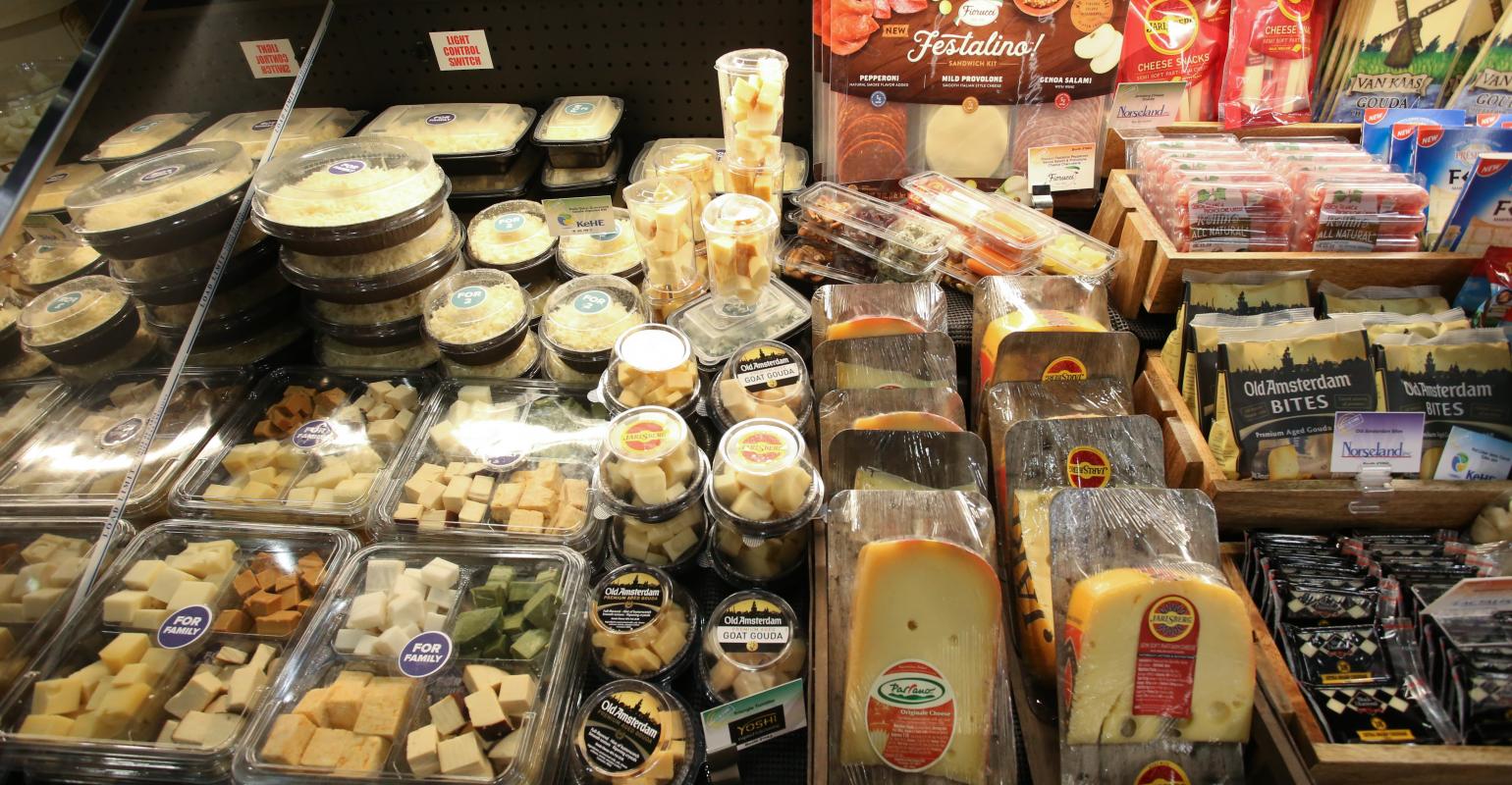 While deli cheese was up 5.2% from last year, packaged cheese increased significantly more, at 22.1%, according to IDDBA and IRI data.

Since peaking with a 15.9% increase in sales year over year during the lockdown surge week of March 15, numbers for the deli department have been discouraging including four consecutive weeks of sales decreases year-to-year of more than 20%. For the week ending April 19, deli was down 25.5% from last year. 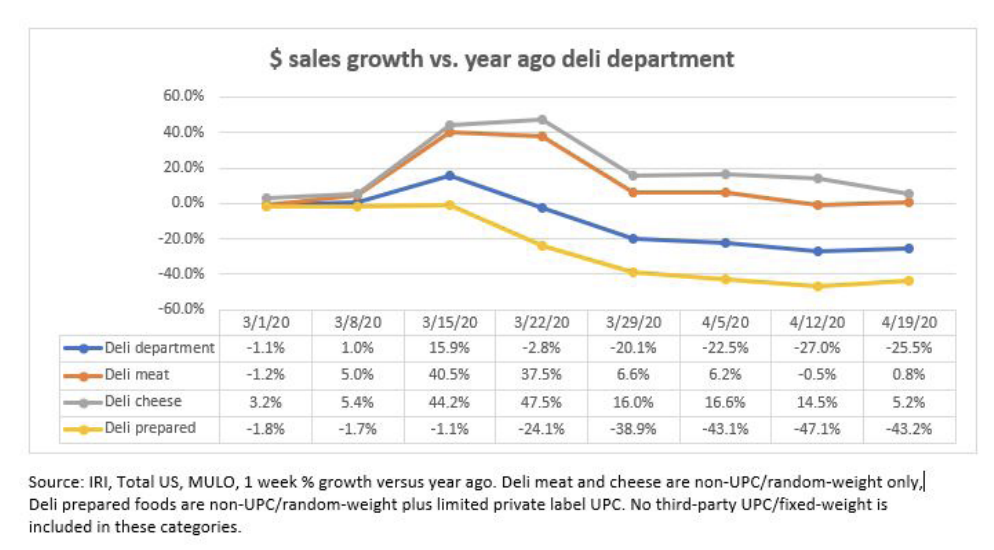 Random-weight deli meat sales were slightly negative Easter week, but recovered slightly to +0.8% over the comparable week in 2019.

“Whereas the fresh meat department continued to be the leader in perimeter sales with another double-digit gains week, random-weight deli meat sales have been a bit challenged these past few weeks,” said Jonna Parker, team lead fresh for IRI. “But the same pattern that we have been observing remained true for the week ending April 19 as well. Stores providing grab-and-go meat and cheese options did see growth. While service-counter sales made up 68% of deli meat sales this week, sales were down 13.4%. Sales for service-counter deli meat that has been pre-sliced for grab-and-go, but still sold non-UPC, was up 61.4%. This is a key takeaway for retailers who are not yet providing this service.”

Meanwhile, prepackaged, UPC refrigerated luncheon meats continued to outperform random-weight deli meat, with dollars up 14.2% and an increase for volume sales as well.

Deli cheese was a bright spot, up 5.2% from last year — but that number is down from the double-digit weekly increases the category has seen since March 15.

“Just like seen in deli meat, packaged cheese increased significantly more, at 22.1%,” said Angela Bozo, education director with IDDBA. “That is a lot lower than the gains we had been seeing over these past few weeks, but we have to keep in mind the Easter 2019 impact. Additionally, we’re seeing the positive impact of pre-slicing deli cheese for grab-and-go availability. Whereas service-counter sales were down 10.4%, cheese packaged for grab-and-go, but still non-UPC, was up 73.3%. It is important to keep in mind this is a smaller share of total random-weight deli cheese (32%), but it remains an important takeaway to help drive sales.” 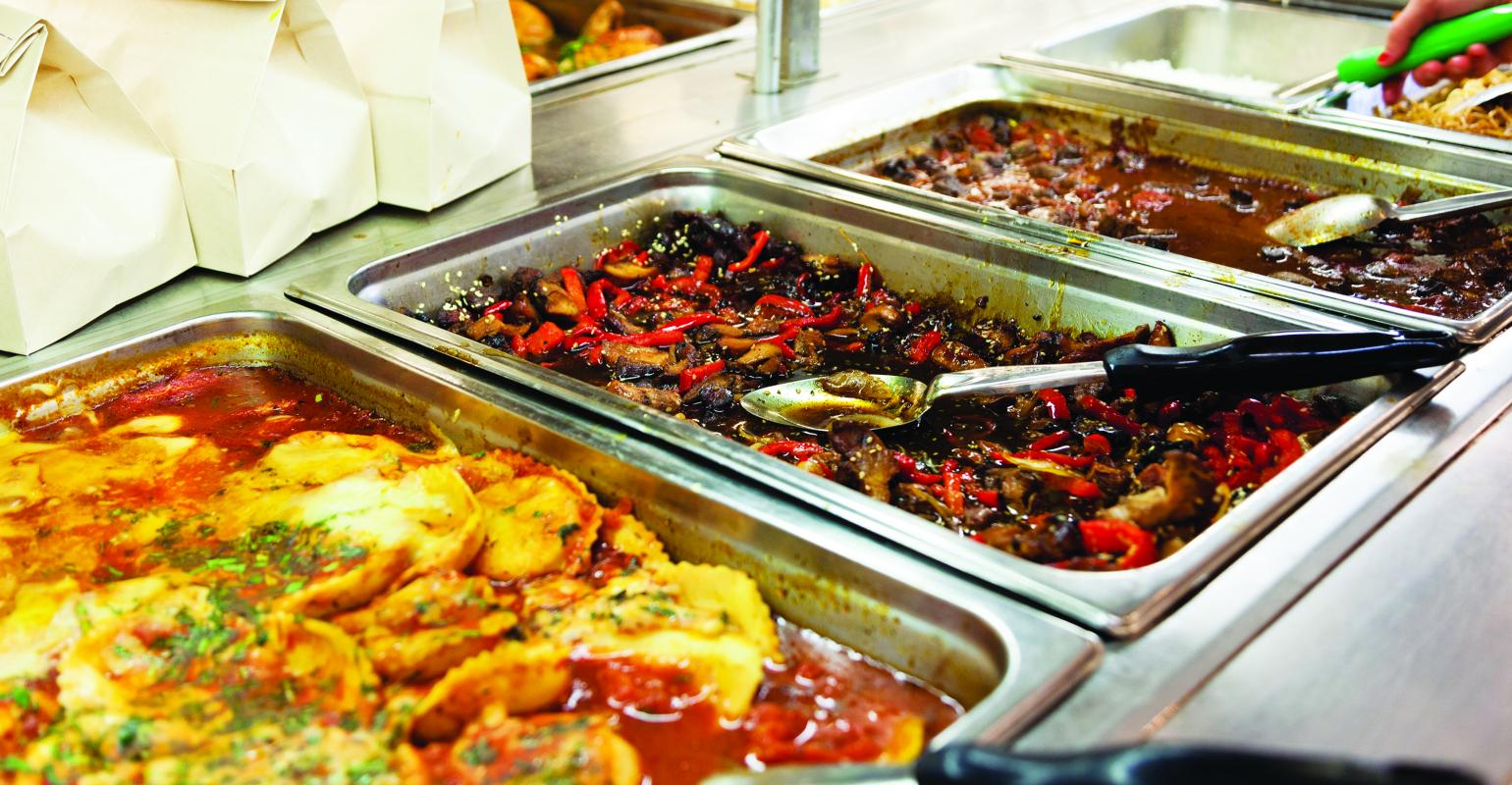 Many stores have closed service counters and self-serve areas for a variety of reasons from staffing to CDC guidelines to shopper concern.

As shoppers increasingly try to reduce the number of trips to the store, as well as make more meals at home, sales remain a struggle for prepared foods in the deli, down a staggering 43.2% the week of April 19. In addition, many stores have closed service counters and self-serve areas for a variety of reasons from staffing to CDC guidelines to shopper concern, and prepared food has historically not been well represented or easy to order online, where an increasing amount of grocery shopping is being done. Sales were off for all offerings and meal occasions, whether breakfast items, combo meals, trays or deli pizza.

“Deli-prepared remained a hard-hit area,” said Eric Richard, industry relations coordinator with IDDBA. “At the same time, the soup aisle and frozen meals continued to increase double-digits.” Still, there is some opportunity in the category: with many restaurants closed, Richard said, “Remind online shoppers about rotisserie chicken for tonight’s dinner or a holiday meal solution for Mother’s Day in two weeks to recapture the spotlight.” 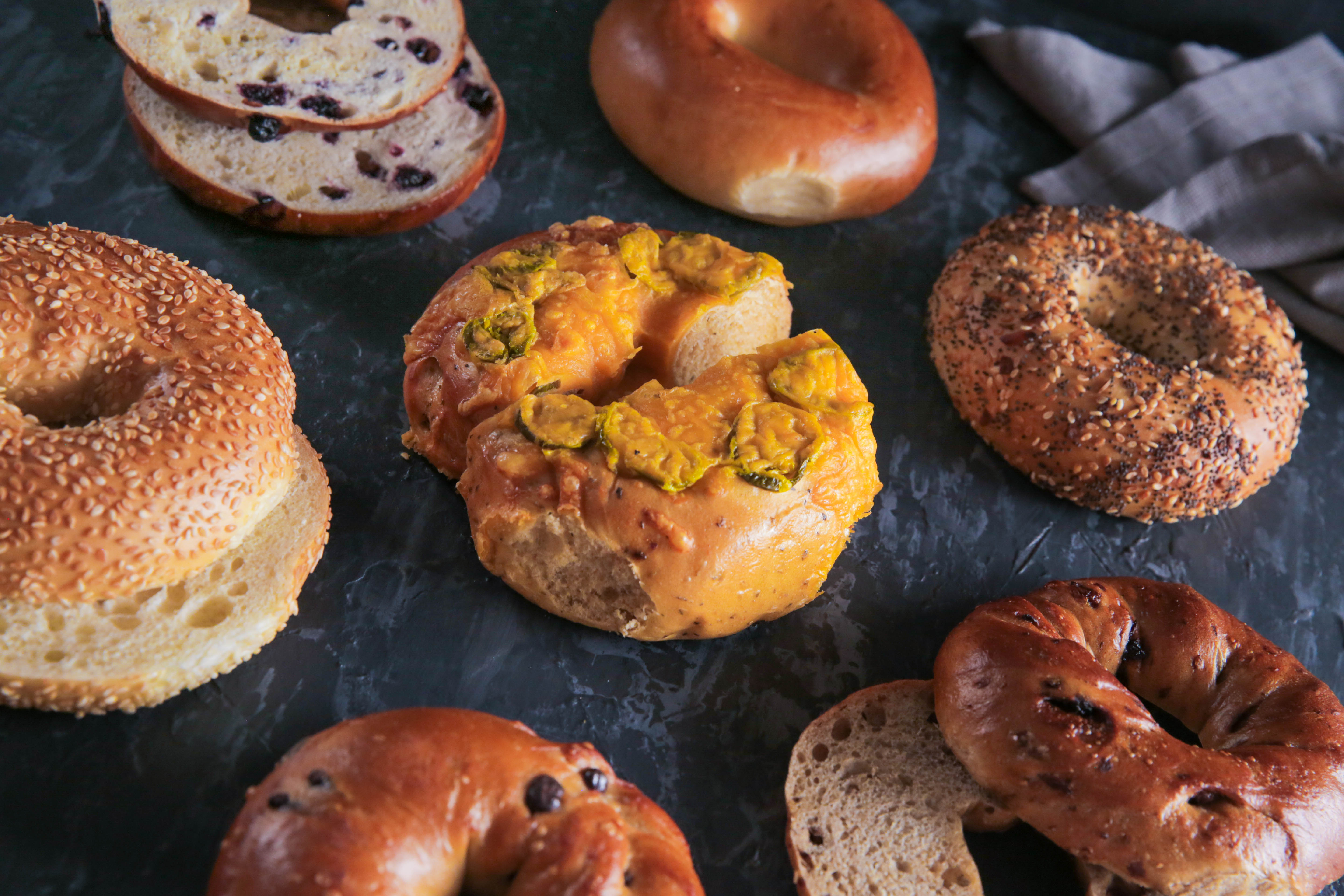 Functional baked goods such as bread and bagels continue to perform well, while indulgent baked treats have dropped in sales.

As many retailers have closed or reduced their in-store bakery offering, sales for the in-store bakery (non-UPC, random-weight items, no UPC items) were off by more than 32% versus those during the same week last year. On the plus side, packaged baked goods — i.e., the “bread aisle” and packaged cookies and crackers — continue to sit comfortably above last year’s sales (at 5.2% and 4.7% gains, respectively). Those numbers are down significantly from double-digit increases in the weeks since March 15, but last year the week of April 19 was also Easter week, which impacted year-to-year sales comparisons.

Other baked goods, including packaged cookies and crackers in UPC/fixed weight packages, continued to track well ahead of 2019, despite going up against Easter 2019. Following the stock-up weeks in mid-March, both cookies and crackers tracked about 10% ahead of the comparable week in late March and early April, but have dropped to single digits the third week of April. Sales may be affected by America’s baking craze, with baking aisle sales continuing to be highly elevated, up 28.6% over the comparable week in 2019.

“As April draws to a close, there is still great uncertainty about the state-by-state decisions on re-opening the country,” noted Anne-Marie Roerink, president of 210 Analytics and author of the report for IDDBA. “Some states began lifting their executive orders for non-essential businesses whereas others have indefinite shelter-in-place mandates. The reopening of restaurants in some states may provide an indicator of consumers’ mental readiness and economic ability to re-engage with foodservice. For the foreseeable future, it is likely that grocery retailing will continue to capture an above-average share of the food dollar. In addition to many consumption occasions having shifted to at-home, more than 26 million Americans have filed for unemployment in the last four weeks and economic pressure typically translates into more meal preparation at home.”