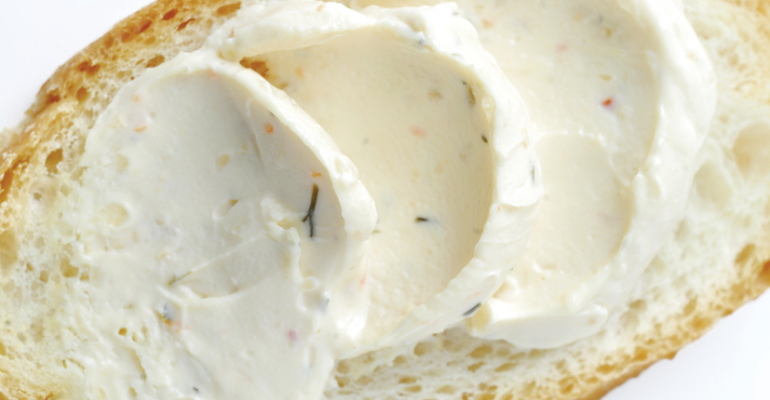 &ldquo;People may not be vegan or vegetarian, they&rsquo;re just looking to eat healthier. Cheese is not the healthiest food.&rdquo; &mdash; Jamie Schapiro, director of marketing, Galaxy Nutritional Foods

The growing demands of special-needs shoppers are helping categories once considered niche get much-needed upgrades. One of the hottest segments is cheese alternatives.

Sales of analogs free of lactose or casein, or completely dairy-free, are up in most cheese-related categories, particularly shreds. Aside from vegans, vegetarians and those with food allergies, sales are getting an additional bump from anyone looking to improve their diets by cutting back on saturated fat. 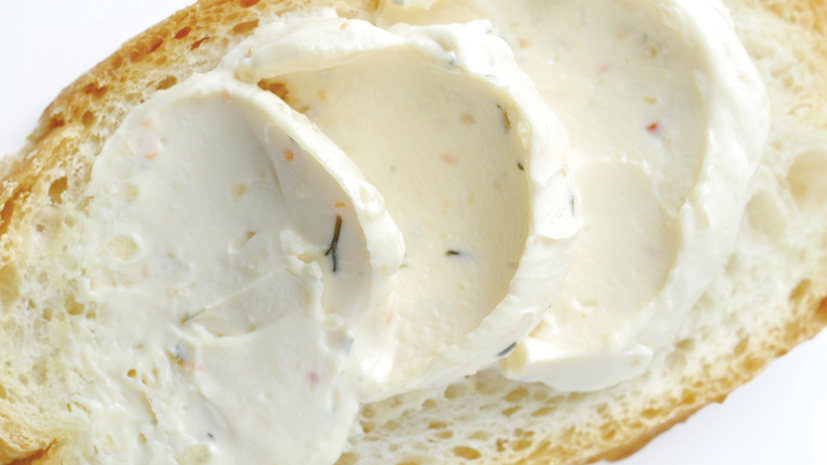 “People may not be vegan or vegetarian, they’re just looking to eat healthier,” said Jamie Schapiro, director of marketing for Galaxy Nutritional Foods, makers of the recently re-branded GO Veggie! line of lactose-free and dairy-free products. “Cheese is not the healthiest food.”

Consumers have become more open to trying new products, manufacturers say. They’ve embraced fluid dairy alternatives like almond milk, and are snacking on hummus, a product many of them never even heard of until recently.

“That is a product that went from $5 million in sales 16 years ago to $400 million today,” noted Alex Paiuk, president of Nutty Cow, a year-old manufacturer of cashew-based cheese analog spreads. “People are looking for healthy alternatives that are compatible with their diets and are highly versatile.”

As the category grows, retailers will need to determine whether it’s time to move analogs out of the produce department, where most of them are currently merchandised alongside vegetarian products, and into the actual dairy case.

Make Mine a Vinegar

Americans most often associate the pungent tang of vinegar with their favorite salad dressing. The last place consumers would expect to find the fermented fruit juice is in a ready-to-drink health beverage — but that’s exactly where it’s showing up.

“Vinegars present us with a clean flavor, a popping sensation,” said Kazia Jankowski, associate culinary director at the Sterling-Rice Group, a Boulder, Colo.-based food marketing firm. “The experience is much lighter and brighter than the one we get from our meat-and-potato diet.”

Several companies are currently pushing all-natural or organic juice beverages with a shot of apple cider vinegar. Bragg Live Food Products has already pioneered the emerging category when it came out with a line of RTD cider drinks in 2010. Each one of the six certified organic varieties contains two tablespoons of apple cider vinegar per 16-ounce serving. They’re a better-for-you option than the traditional soft drinks that appeal to most Americans, according to Dr. John Westerdahl, Bragg’s nutrition expert.

“Most of your ready-to-drink beverages are junk stuff. They have artificial flavors, artificial colors and other things that don’t contribute to your health,” he said. “You have to be just as careful in the wellness category because many of those drinks have a fair amount of sugar in them.”

Research has shown vinegar promotes digestive health by aiding the body’s absorption of essential nutrients. Vinegar is also known to have antiglycemic properties that help maintain blood sugar levels, an issue of concern for diabetics.

“Hippocrates used vinegar for his patients, and it’s forever been known as a home remedy for a number of ailments,” noted Westerdahl.

Vinegar beverages have a long history in Asia. Kombucha, the fermented tea libation that’s become popular in the United States, was invented in China. Sales hit a snag recently when products were pulled from store shelves after it was discovered that fermentation created alcohol as part of the process. The new cider drinks won’t ferment to that point and are shelf-stable.

Overall vinegar sales are up in the past year, according to SymphonyIRI. The category grew more than 5% to reach $293 million in the food/drug/mass channel (excluding Wal-Mart). Such numbers bode well for the sale of vinegar beverages, though marketers admit American taste buds may require some conditioning.

For the growing number of consumers cooking at home, there’s nothing like a fresh, restaurant-quality meal. There’s just one problem: They need a little help making it.

Food manufacturers are all too happy to assist. They’ve come out with meal starters that do much of the heavy lifting by providing complex sauces, soups and other mixtures to which cooks can add their own ingredients and make customized, flavor-rich dishes. The starters provide the foundation for dozens of recipes, and many of them promote the use of healthy ingredients like peppers and grilled chicken. 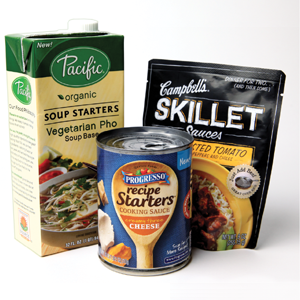 “The fact that it’s a starter means you’re adding fresh ingredients to it like produce and lean protein,” said Kara Nielsen, trendologist with the Center for Culinary Development, San Francisco.

While there’s no sales data pegged specifically to meal starters, similar offerings like broth and dry dinner mixes are showing promising growth. Swanson Flavor Boost, a concentrated broth marketed as a way to kick up the flavor in home-cooked meals, has shot up to more than $11 million in sales after a year on shelves, according to figures from SymphonyIRI.

Pacific senior brand manager Sibel Candemir stressed the importance of providing education and inspiration for home cooks. Every box of her company’s soup starters comes with a QR code that links shoppers to recipes, cooking videos and shopping lists. Pacific has also partnered with natural food retailers like Whole Foods and Sprouts on in-store cooking demonstrations.

“They can feel like they still have control and that real sense of accomplishment in the kitchen,” said Candemir.

For sales-thirsty retailers, a plain old water bottle just won’t cut it these days. That’s why reusable bottle companies have introduced a host of innovations that make staying hydrated faster, easier and, yes, even stylish.

The category is overflowing with options. There’s the Intak bottle from Thermos that measures daily water consumption. For the very eco-conscious, there’s the Bamboo Bottle, which features a glass body and an outer shell made of bamboo. The Hydros bottle comes with a colorful filter attachment that promises to block out harmful microbes and particles. Category leaders Nalgene and Camelbak, meanwhile, offer a variety of different bottles, from ultra-light vessels to sleek flasks. Earlier this year, Camelbak released its “eddy” bottle that delivers water at an optimal rate without spilling.

In addition to these innovations, companies have also allayed concerns over harmful chemicals by using plastic that is free of bisphenol-A (BPA) and pthalates.

And with good reason, too. After seeing an initial surge in sales a few years ago — when campaigns urging consumers to “take back the tap” hit fever pitch — the reusable industry has watched bottled water companies recapture market share. According to figures from Beverage Marketing Corp., volume sales of bottled water increased by 4.1% to 9.1 billion total gallons last year — the highest total ever.

Staying afloat in the competitive category may require more than just clever takes on the concept of water delivery. Zing Anything features a value-added component. The company makes stainless steel “Zingers” that feature a separate compartment where users can juice citrus fruit, or puree fresh fruits, herbs and other ingredients that combine with the water. It’s a concept that takes aim at aquaphiles as well as fans of healthy functional beverages.

“You can really hone in on your favorite flavors and taste preferences versus buying something that’s prepackaged,” said Josh Lefkovitz, company president.

Another concept that’s showing promise is, of all things, the glass bottle. Vincent Cobb, founder of reusit.com, a site that sells reusable containers, noted that glass now accounts for 20% to 30% of his company’s total water bottle sales.