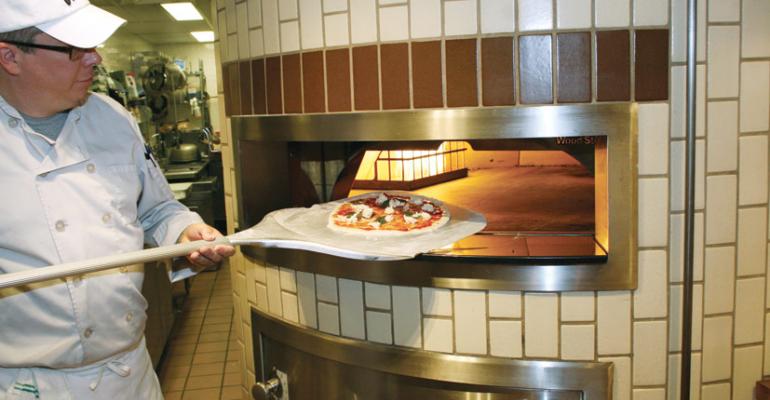 Dorothy Lane Market, a three-store independent based in Dayton, Ohio, resolves to make prepared foods from scratch with seasonal ingredients.

“We try as much as possible to incorporate local items and seasonal items in our cases every time we get the opportunity,” said kitchen director Jason Belcher.

One example is the retailer’s Naples-style pizzas. The bakery department makes the dough, which is topped with fresh, sometimes seasonal, ingredients.

The pizzas are baked to order in stores.

“It’s a gas-powered oven. So there’s a flame on one of the sides and then we have to turn the pizza usually about three to four times per pizza to make sure you get to evenly distribute the heat and we get the proper amount of char on the bottom as well as the sides,” said Belcher.

At the end, the pizza is lifted to the top of the oven for three to five seconds to caramelize the toppings. The whole process takes 90 seconds to two minutes.

The pizza originated at one of Dorothy Lane’s Dayton locations in late 2011, and the Springboro, Ohio, store installed an oven a year later.

“When we first started, we tried to use solely Naples-style pizzas like the margheritas,” said Belcher.

There are now toppings like pepperoni for customers that prefer a more U.S.-style pie.

“The margherita is our best seller, which is just your traditional fresh mozzarella, basil and red sauce,” said Belcher.

To keep flavors fresh, the retailer runs promotions like a pizza of the month and seasonal pizzas.

“We did a butternut [squash] pizza in the fall. We do a fresh tomato, local-grown tomato and burrata pizza in the summer. We also do a prosciutto and peach pizza,” said Belcher.

In fact, the retailer creates special dishes across the department during the summer peach season, including a peach BLT that substitutes peach for tomato. 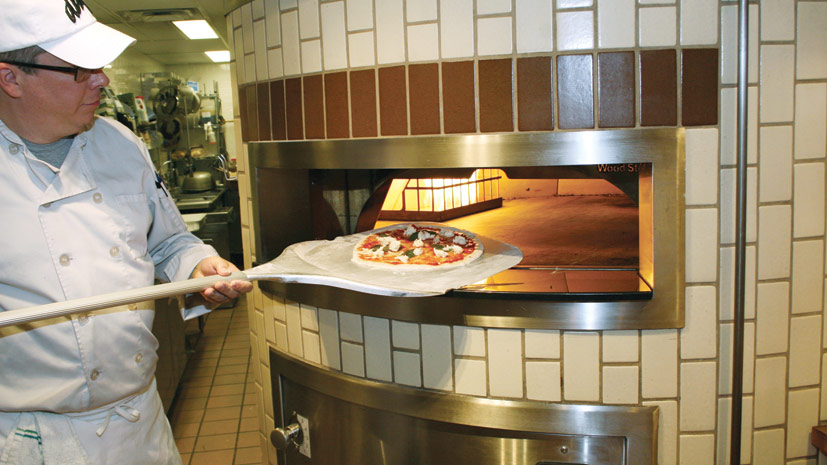 Hatch chilies are another successful seasonal item that foodservice integrates into meals.

“In our meat department, we do Hatch chilies in our burger and some other things. And then in the kitchens we do probably about seven or eight different recipes that use Hatch chilies to kind of incorporate them throughout the whole store, not just in produce,” said Belcher.

Dorothy Lane begins selling pizzas at 10 a.m. Initially, the retailer started making crepes and frittatas to have some action going earlier in the morning. Now, however, those items are available all day.

“Especially with crepes we sell throughout the day pretty regularly. Frittatas are more in the morning but occasionally you’ll sell one during the day,” said Belcher.

“And both departments make everything from scratch. So it’s not a frozen bag of soup that we thaw and heat up,” said foodservice director Donna Howell. “And we use our air-chilled chicken, our beef. We make our stock all from scratch. And we do use heavy cream, and we salt and pepper to taste so our stuff is full of flavor.”

Convenience is another theme for prepared foods at Dorothy Lane.

Rotating single-serving “dinner deals” include an entree and two sides. There are two price points; at $6 customers might choose from meatloaf or turkey, while $10 entrees might comprise parmesan-encrusted tilapia. Sides range from green beans amandine to au gratin potatoes.

Also for $6, customers can pick up single-serving pasta bowls or Asian bowls, with flavors like teriyaki and tikka masala.

For lunches or snacks, there’s the DLM 4Square, a container with a different food item in each quadrant. The ham 4Square, for example, includes sliced ham, cheese cubes, Annie’s Organic Cheddar Bunnies and grapes.

Customers can also order a 4Square filled with deli salads for $7.99 per pound.

“So you can have four different things for lunch. And that’s a big hit,” said Howell.

With some of the chicken deli salads normally retailing at $11.99 a pound, the 4Square is a real value, she added.

“The lunchbox is a kid’s lunch that’s in a cute little plastic clear container. And it has a sandwich, an apple, a string cheese, raisins and Goldfish. And it retails for $3.99,” said Howell.

The three sandwich varieties are turkey, ham or peanut butter and jelly on either white or 10-grain bread, scratch-made by the bakery.

Lunchboxes aren’t just for kids. “It’s a great value for all that food. Myself, I buy them quite often,” said Howell.

In September, one store ran a promotion where customers could purchase up to two lunchboxes at 99 cents each. Lunchbox sales tripled.

For a heartier sandwich, Dorothy Lane also boasts a popular deli sandwich program. All breads are made from scratch. The retailer stocks its own line of hams and turkeys, and meats are always sliced to order.

One popular specialty sandwich — of which there are dozens — is the Little Ed’s Big Reuben. “It’s made with corned beef. It’s on our rye bread with sauerkraut and Swiss cheese. And it’s Emmenthal Swiss. And we make our own Russian dressing for that,” said Howell.

When it comes to foodservice additions in 2014, Belcher hopes to install a pizza oven in Dorothy Lane’s third store.

January is also when the retailer revises its foodservice menus and comes up with new recipes.

“And then our chef, Carrie Walters, this is her prime time. This is when she starts creating. So I really don’t know what’s up her sleeve, but I would imagine more like kale dishes, greens, that type of stuff, are coming our way,” said Howell.