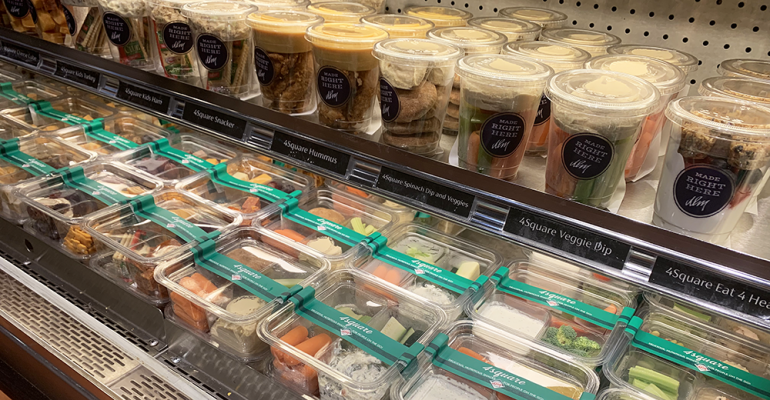 Grab-and-go is all about fresh and fast

Packaged goods used to be what customers grabbed at the front of the store. But customers’ tastes and demands are changing. Customers are still short on time, but they’re less likely to compromise on health. Retailers are responding to these changes by creating new prepared items, like salads, juices and even dinners, and by switching around store layouts or even testing out new store prototypes to accommodate consumers’ new concerns.

“It’s really changed in the last year or two,” said Carrie Walters, culinary director of Dorothy Lane Market, a gourmet chain based out of Dayton, Ohio.

“Traditionally it's always been prepackaged leaf salad, which is our Cobb salad or Buffalo chicken salad or Caesar salad [and] pizza and soups were always our mainstay. Now we're searching for more grab-and-go space because our grab-and-go customer wants more to choose from than just those few items.”

Walters’ discovery aligns with a handful of new studies on convenience store shoppers and convenience trends.

“Chilled and deli foods are witnessing increasing demand in the food and beverages industry, mainly owing to growing acceptance among consumers,” according to the study’s authors. “The popularity of these products is largely associated with their ease of preparation, storage and availability in retail outlets, which is expected to influence the global consumption patterns over the forecast years.”

Walters has added sandwiches, sushi, sides, pasta bowls, lunches and heat-and-eat dinners to Dorothy Lane Market’s grab-and-go program. There’s a sizable grab-and-go case that “we are constantly filling,” she added. And most grab-and-go items are displayed together. “We’re trying to get it all there, so it’s like one-stop shopping.”

And many shoppers visit Dorothy Market much like they would a convenience store, said Walters. Recently, after much debate internally, Walters team took over a section at the front of the store with a prepared dinner meal display.

“The concept is you walk into the front of the store, and you can just grab a bag and pay for it at the express checkout lanes and get out. So it’s kind of like the drive-through window although you’re walking in,” she said.

Witnessing the popularity of convenience stores, some grocers are experimenting with smaller convenience-focused versions of their traditional stores. 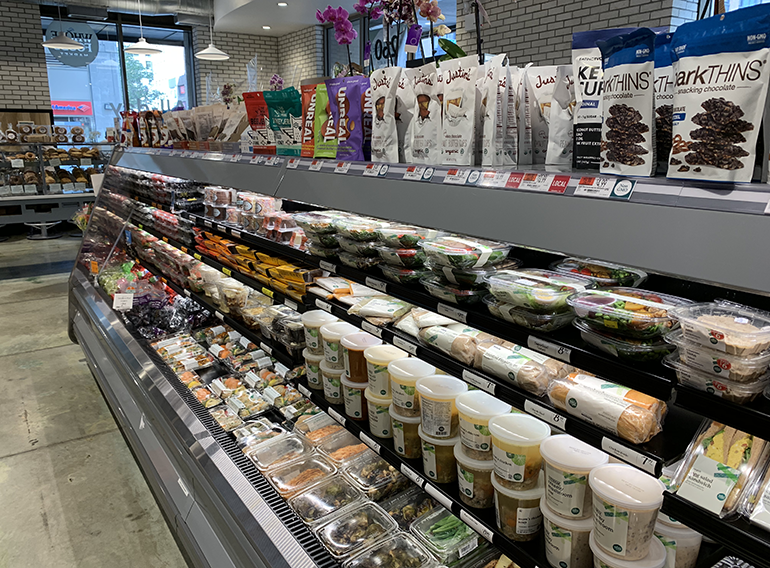 Emulating a convenience store might be a smart business move. U.S. convenience stores experienced the 16th straight year of record in-store sales in 2018, according to newly released National Association of Convenience Stores State of the Industry data.

The store is just a few doors down from a traditional Whole Foods Market, which does a brisk afternoon business. “The main market in Chelsea can see some big crowds so having Whole Foods Market Daily Shop gives our customers more quick options,” said a Whole Foods spokeswoman. 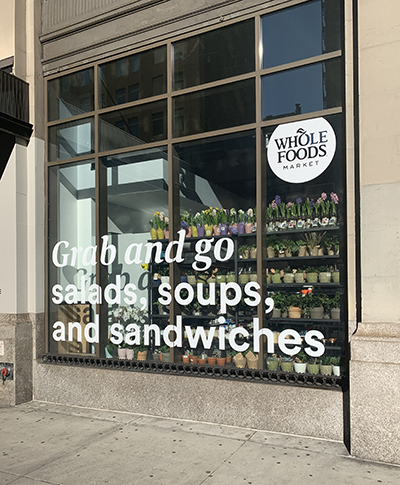 “Popular lunchtime items at Whole Foods Market Daily Shop are wraps, sandwiches, pastries, cut and whole fruits, cold beverages and sushi,” she continued. “Rotisserie chickens and side dishes like mac and cheese and mashed potatoes are also very popular. The popular items are no surprise since the Whole Foods Market Daily Shop was designed to be a quick, convenient shop for our customers to enjoy while they were on the go.”

The Daily Shop is one of a handful of experiments from Whole Foods Market that deviate from its traditional grocery stores. Inside the Manhattan-based Whole Foods in Bryant Park, the brand has set up a coffee shop and juice bar outpost called the “News Agency.” The venue “pays homage to the look and feel of the city’s classic newsstands” and opens a bit earlier than the grocery store to accommodate commuters each morning, said the company spokeswoman.

“The success of the Bryant Park location’s News Agency venue showed the demand for a space devoted to essentials. Through the News Agency concept, we learned that customers want a space that's convenient, quick to shop and has their favorite products."