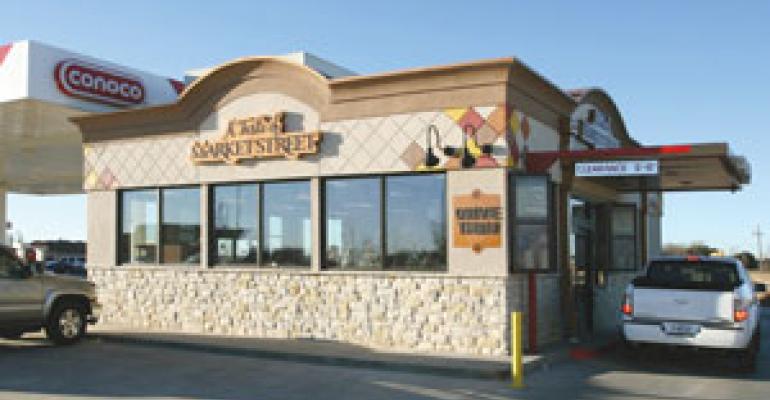 Convenience trumps everything in today's meals market, and retailers are doing their best to deliver it. The strategies for getting customers to think and say and in the same breath run the gamut, but there's no doubt many ideas have been borrowed from the food-service arena. Publix Super Markets certainly took a page from the restaurant world when it gave its curbside service its debut at a Fort

Convenience trumps everything in today's meals market, and retailers are doing their best to deliver it.

The strategies for getting customers to think and say “meal” and “supermarket” in the same breath run the gamut, but there's no doubt many ideas have been borrowed from the food-service arena.

Publix Super Markets certainly took a page from the restaurant world when it gave its curbside service its debut at a Fort Myers, Fla., store early in the summer. “For customers who are time-starved, it's a way for them to consider us as an option for lunch or dinner,” a Publix spokeswoman told the local newspaper at the time. “It's convenient.”

She said the program works similar to a restaurant curbside service, in which customers phone in orders, park in designated spaces and submit their payment to an employee. Publix has allocated a handful of parking spaces near the deli entrance at the Fort Myers site and monitors them with a video camera.

This type of concept and similar ones could be the path that will enable supermarkets to compete effectively with their prepared foods programs, industry sources said.

“Supermarkets must start thinking like food-service operators in order to capture the meal business,” said consultant Neil Stern, senior partner, McMillan Doolittle, Chicago. “This means thinking through all aspects of the experience, from menu management, operations, packaging to the efficiency of quickly meeting the customer's needs.

Publix Super Markets stands out as progressive when it comes to offering its customers meals in different ways. The Lakeland, Fla.-based chain is also trying several other concepts right now. Multiple venues of prepared foods in one store, and soon-to-come meal-assembly programs are part of the effort. The common thread is that the concepts offer customers unprecedented convenience. Quality is a given. So is variety.

“It's for customer convenience. We're endorsing families getting back around the dinner table to eat together,” said Maria Brous, spokeswoman for Publix, which has 800-plus stores in the Southeast.

“Customers have responded well to the multiple [meal] venues we have at Lake Mary. They like the idea of feeding the whole family from that one location, as opposed to going to multiple locations,” Brous added.

Indeed, that particular concept, in which customers face a lineup of nine takeout food choices, is marked for expansion to other stores.

“It's doing well. It'll be part of the new GreenWise Market [which opened in Palm Beach Gardens late last month]. In fact, we'll have 10 venues there. We've added a fresh, self-serve salad bar.”

At GreenWise Market, Publix's first, a format that spotlights natural and organic and healthy items, the multi-venue meals program includes the added convenience of curbside service and a walk-up window. The meals program with added conveniences will be an important part of four additional GreenWise Markets that are in the planning stages right now — three in 2008 and another in 2009.

Meanwhile, a Texas chain, United Supermarkets, has launched a mini-store specializing in meals at the far corner of its parking lot. It's doing exceedingly well, and another is on the drawing board, said company spokesman Eddie Owens.

The mini-store, dubbed A Taste of Market Street, is a 1,300-square-foot, miniature version of the 46-unit chain's six fresh-format Market Street stores. There is a fuel station there, but it's definitely not to be confused with a gas station or a convenience store, Owens told SN. It's a different concept, the chain's first, that includes fresh produce, gourmet meals to go, Peet's coffee, a bakery and other products.

“Meals are pre-prepared inside the main [65,000-square-foot] store and taken on a cart out to ATOMS,” Owens said. “Guests don't have to call ahead. The menu is on a sign at the drive-through, but guests could call and find out what the meal of the day is, or they could visit our website.”

Customers also can park and go into the mini-store, where they can buy typical convenience items, but unlike many convenience stores, the selection inside is heavily geared toward prepared foods.

For other supermarket retailers, simply tweaking the way their prepared foods are marketed — emphasizing options such as side dishes and special offers on meal bundles — has helped give their stores a dinnertime boost.

For example, Quillin's, for the first time in years, promoted meals this summer on four billboards strategically placed around its hometown of LaCrosse, Wis. The family-owned company also is promoting newly created, bundled meals featured on Sundays, joining their weekday menu of Meals of the Day.

For the whole month of August, LaCrosse residents saw this message on colorful billboards placed in four spots around town: “Dinner-A-Day, Hot Deli Lunch, $4.99 Each Plus Free Soda. It's Gotta Be Quillin's.”

“With the purchase of a whole rotisserie chicken or eight pieces or more of fried chicken, customers got a four-pack of tea biscuits, four hot corn cobettes and one pound of Quillin's creamy coleslaw, all for 62 cents.”

That was just for one week, but now every Sunday there's a special on chicken drumsticks. Ten of them are $5.99. With that the customer gets a pound of Quillin's potato salad.

Compared to some, Quillin's efforts may sound old-fashioned, but they're working.

“The drumstick bundling has generated some nice numbers companywide and has definitely brought traffic up on Sundays,” Doering said.

For the lunch crowd, Quillin's has upgraded its sandwich program to overstuffed “Quillin's Bistro Sandwiches” on upscale bread, in upscale packaging.

They're priced as the former sandwiches were, at $4.99 a pound, but these heftier ones bring a higher ring, and people are seeing them more as a satisfying meal, Doering said.

“The sandwiches are so big. I've had people say this is going to be my lunch and my dinner, too.”

The sides are right there beside the sandwiches, too, in a well-organized self-service case.

Retailers told SN the challenge is sometimes just getting shoppers to turn their attention away from their weekly shopping lists and begin thinking “meal” while they're in the store, and bundling sides with sandwiches and entrees is a great way to do that, industry observers told SN.

“We saw that being done a lot in New York, at Balducci's, Fairway and other places,” said consultant Howard Solganik, president, Culinary Resources, Dayton, Ohio. “There were signs offering sides for a specific price with the purchase of an entree.”

Solganik leads Passion for Food tours, taking retailers to all corners of the United States to visit manufacturers, processors, retailers and restaurants known for their quality and service.

Other retailers are finding that many shoppers actually want to do more cooking at home, but either need help with basic kitchen skills or just want a few new ideas to try at home.

That trend is going strong, according to recent statistics from ShoptoCook, a Buffalo, N.Y.-based recipe kiosk provider.

With kiosks in 300 stores around the country, “we've had 1.5 million recipes printed out by supermarket customers in the last calendar year,” said Jon Picard, ShoptoCook's chief operations officer.

What's more, 62 million recipes have been browsed in the last year, with the simple-to-prepare Meals in Minutes getting a large share of hits, Picard said.

And to help ease that sinking feeling so many customers say they have around 4 o'clock when they don't know what's for dinner, some retailers are helping them plan ahead with meal assembly. They've launched meal assembly programs in the mode of Dream Dinners and Super Suppers, the country's top meal-assembly franchisors, which invite consumers to assemble a month's worth of meals and then take them home and freeze them.

At least one retailer, Piggly Wiggly Carolina Co., has linked up with Dream Dinners; other retailers, such as EarthFare, have launched their own, proprietary meal-assembly concepts. Publix, for example, will soon expand its Apron's program to include meal assembly in selected stores. The first of these will be launched this fall in a Jacksonville, Fla., unit.

Another is planned for launch next year, Brous at Publix told SN last month. That one will be a stand-alone location in the same shopping center as a new Publix store, but separate from the store.

“We're testing the concept both ways [stand-alone and in-store],” she said.

At Bayview Thriftway, Olympia, Wash., cooking school director Nancy Hebb is showing customers how much fun it is to cook a meal — with the help of some guest celebrity chefs. The two-unit independent is getting its customers in a meals mood and it is succeeding in sending them through the store for particular ingredients, officials said.

The company charges anywhere from $35 to $85 a class, depending on the fame of the chef who's leading the class. The setting is very professional and yet homey, said Kevin Stormans, one of the owners of the company.

The kitchen — on the second floor of the 28,000-square-foot store, overlooking Puget Sound — is appointed more like a nice home kitchen than an industrial kitchen, Stormans pointed out.

“This program has been wildly successful,” he said. “We're running three, four, sometimes five classes a week. For us, it has been one of the most successful strategies against people eating outside the supermarket.”