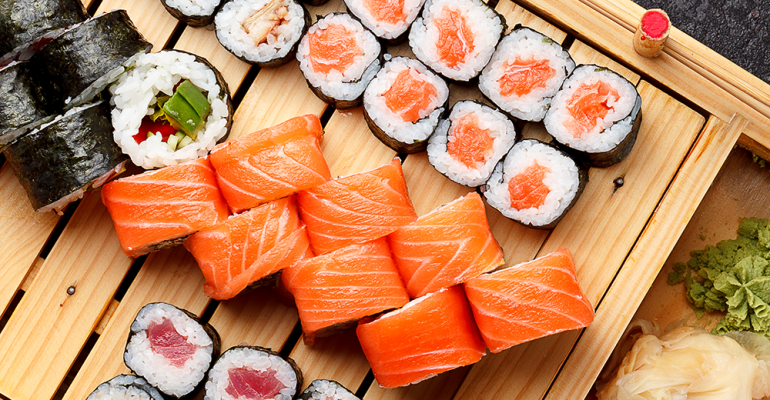 Sushi has been one of the fastest-growing categories in supermarket delis, and operators are taking steps to keep the momentum going

Although most supermarkets will likely never compete with high-end sushi restaurants, many are now merchandising sushi dishes that meet consumer demands for fresh, portable, grab-and-go meals. Some operators — often working closely with outside vendors that operate the sushi departments in their stores — have expanded their sushi offerings to include related dishes such as sashimi and Hawaiian poke. Others have been seeking to upgrade the quality of their sushi ingredients and to source more sustainably.

“It used to be that supermarkets only sold basic rolls,” said Josh Onishi, president and CEO of Hana Group North America/Peace Dining, which operates nearly 300 sushi stations and other Asian cuisine venues inside supermarkets, including dozens in Whole Foods locations, mostly under the Genji banner.

“Consumers didn’t expect restaurant-quality sushi in their local grocery stores,” Onishi explained. “But with more and more people turning to the prepared food section for meals, demand for not just high-quality but healthy, sustainable options is growing rapidly.” 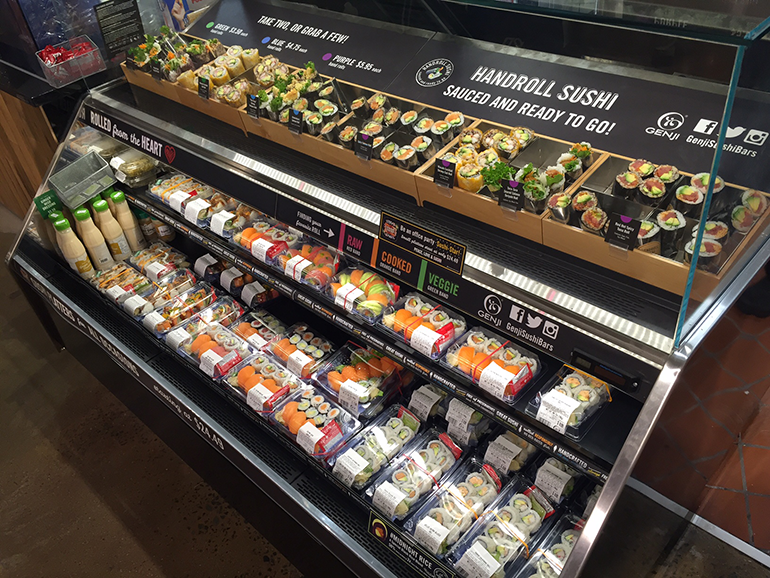 At Genji sushi stations, which are found in dozens of Whole Foods markets, there are sushi options for every diet, including rice-based vegan rolls.

Several supermarkets have committed to sourcing 100% sustainable seafood in the coming years — which Genji’s parent company has done since 2011, Onishi noted. In addition, supermarket sushi offerings have become more varied and sophisticated.

“There are now options for every diet imaginable — rolls made with brown rice and quinoa, ‘fresh’ rolls made without rice, vegan rolls — you name it,” Onishi said.

One retailer that has taken sushi to a gourmet level is Seattle-based Asian supermarket operator Uwajmaya, which offers sushi in the deli areas of its stores and sashimi in its seafood departments.

Kris Kosugi, seafood merchandiser at Uwajimaya, said the four-unit chain takes pride in offering high quality and variety. Presentation is one of the keys to success in supermarket sushi and sashimi offerings, he noted.

“Because we are in the retail grocery business, the customers’ eyes make the first impression whether or not to purchase a sushi or sashimi item,” he said. “It is important for both sushi and sashimi products to be fresh and intricately cut.”

Using the right trays to properly display the sushi — Uwajimaya works with a Japanese supplier to give the sushi “a professional look,” Kosugi said — is also important, as is having a professionally trained staff.

“We are fortunate to have sushi/sashimi staff at Uwajimaya with many years of experience,” he said.

Uwajimaya offers about 50 varieties of sushi in total, including about 25 varieties and combinations offered each day. Most are made in-house, although a few rolls are provided daily by a contracted supplier.

“It’s been a really good relationship, as they make the sushi according to our specifications, and it has been helpful in making our deli more efficient,” said Kosugi.

Uwajimaya also carries Korean sushi made by a local Korean company, he said.

“This has become very popular over the last five years,” said Kosugi.

Poke on the rise

But it’s Hawaiian poke that has been the hottest sushi category, Kosugi said. The Seattle area is home to a host of poke restaurants, he noted, and many of the local supermarkets carry poke as well. The Beaverton, Ore., location of Uwajimaya has been carrying poke for 10 years — the seafood manager is from Hawaii, and the store had a lot of Polynesian customers, Kosugi explained.

He said the growth of poke does not appear to have cannibalized sushi and sashimi sales, however.

“Both have had steady growth as we continue to look for innovative ideas to keep ahead of the competition,” Kosugi said. “You can see why they are popular. All three [sushi, sashimi and poke] are convenient to eat, taste good, are reasonably priced, offer lots of variety and can be healthy with the correct choices.”

Although the growth of sushi sales in supermarkets across the country has slowed from the average pace of 12% per year earlier this decade, related offerings such as poke bowls and poke stations have helped pick up the slack with sales growth of 9% for the 52 weeks ended June 30, according to Nielsen.

Among the retailers that have invested in upgrading their sushi offerings is Dayton, Ohio-based Dorothy Lane Market, which in 2017 elevated its sushi “to a new level of excellence” that approaches “what you would expect in a fine sushi restaurant,” the company said in a blog post. The upscale retailer sources high-quality fish through its vaunted seafood departments, and has expanded its offerings to include increased variety and a “more artistic appearance.”

The three-unit chain — like some other supermarkets that merchandise sushi, including Uwajimaya — also offers sushi platters from its deli catering department.

Meanwhile some retailers have begun taking steps to increase the sustainability of their offerings as well. Boise, Idaho-based Albertsons, for example, in 2018 added the “Top 5 by 2022” Sushi Commitment to its Responsible Seafood Program, pledging that the five most popular wild and farm-raised seafood species used for sushi will be sourced sustainably and responsibly by that time. 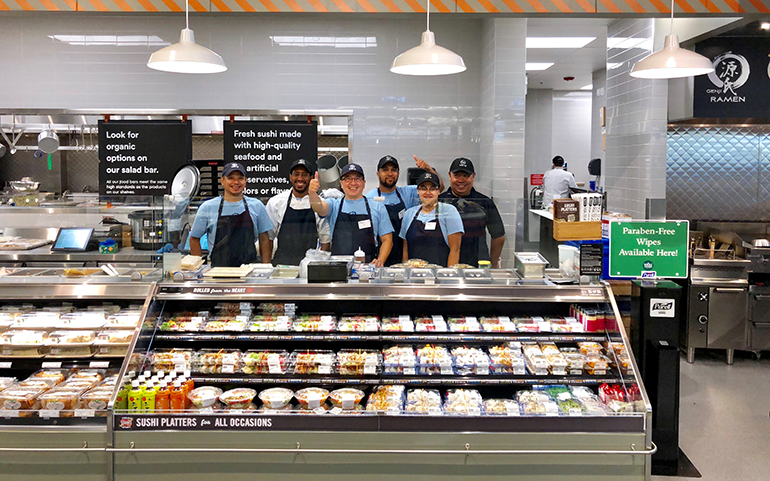 As supermarket sushi offerings have become more varied and sophisticated, the importance of a well-trained and experienced sushi staff has grown.

“When you look at all the seafood suppliers in the world, a very small percentage of them meet our rigorous standards,” he said.

“Then there are customers looking for exotic fish that can’t be sustainably sourced,” Onishi added. “When that happens, awareness and education are key — explaining the reasoning behind our decision not to use species like bluefin tuna or eel at all in our products, even though there’s high demand.”

Promoting sushi and sashimi at Uwajimaya

Kris Kosugi, seafood merchandiser at Seattle-based Asian retailer Uwajimaya, said the four-unit chain deploys a variety of strategies to promote its sushi and sashimi offerings, including:

• Weekly specials: Uwajimaya’s weekly ad features a sushi item at least two times per month, and sashimi items are featured at least once a month depending on time of the year and availability. The chain also runs themed ads, such as its recent “Sushi Week” promotion.

• Facebook: Uwajimaya uses its Facebook page to get the word out that fresh sashimi items have arrived, such as during the recent sea urchin (uni) season. “We also like to send out information on different seafood items such as seared bonito [katsuo tataki] to get our customers to try different sashimi items,” said Kosugi.

• Supplier demos: The chain’s Hamachi supplier recently featured his products nigiri style (a ball of rice with a slice of fish on top) and drove strong sales, Kosugi said.

• Food fairs: Uwajimaya recently hosted an Ehime Prefecture Food Fair featuring products from Ehime, Japan. Vendors demonstrated their products for a week, and the chain also held a tuna cutting featuring the fully sustainable farm-raised tuna from the city of Uwajima, which is in Ehime.